Youssef Chahine Posted by aziza on May 28, 2010 in Culture

Youssef Chahine (يوسف شاهين) is one of the most famous Arab film directors. He was born in Alexandria, Egypt in 1926 to a Lebanese father and a Greek mother.  In 1946, Chahine convinced his parents to let him travel to Hollywood to study acting, where he attended the Pasadena Playhouse outside of Los Angeles, California. 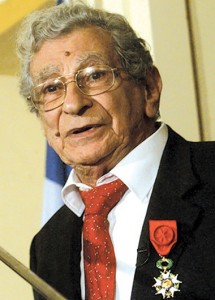 After returning to Egypt, he turned his attention to directing. Chahine directed his first feature film in 1950, (بابا أمين) Daddy Amin at the age of 23. With Nile Boy (ابن النيل) he was first invited to the Cannes Film Festival in1951. The Blazing Sun, 1954 (صراع في الوادي) introduced Omar Sharif to the cinematic screen. Chahine’s first truly indicative film of his style and preoccupations was Cairo Central Station (باب الحديد), in 1958. Chahine himself plays the central character in this film.

In 1963 Chahine made Saladin (الناصر صلاح الدين), an epic, three-hour film in CinemaScope named after the 12th Century Sultan who, as the film begins, is preparing to liberate Jerusalem from its Christian Crusader occupiers. It was scripted by Naguib Mahfouz and the poet and progressive writer, Abderrahman Cherkaoui.

In 1976 he made The Return of the Prodigal Son (عودة الإبن الضال), a “musical tragedy”, but four years earlier had made one of his greatest films, The Sparrow (العصفور) (1972), both co-productions with Algeria. In 1970 he was awarded a Golden Tanit at the Carthage Film Festival for The Choice (الاختيار). He won a Silver Bear in Berlin for Alexandria…Why? (اسكندرية ليه؟) in 1978

In 1992 Jacques Lassalle approached him to stage a piece of his choice for Comedie-Francaise : Chahine chose to adapt Albert Camus’ Caligula, which proved hugely successful. The same year he started writing The Emigrant (المهاجر), a story inspired by the Biblical character of Joseph. This had long been a dream-project and he finally got to shoot it in 1994. This film created a controversy in Egypt between the enlightened wing and the fundamentalists who opposed the depiction of religious characters in films.

In 1997, 46 years and 5 invitations later, his work was acknowledged at the Cannes Film Festival with a lifetime achievement award on the occasion of the 50th anniversary of the festival. He is also credited with discovering Omar Sharif, whose first starring role was in Chahine’s film The Blazing Sun (1954). He also provided Hind Rostom with a very early role as a murder victim in Bab al-Hadid (Cairo Station).