Labor Day in China Holiday Stories Posted by sasha on Apr 27, 2020 in Culture

This Friday is Labor Day (劳动节 láo dòng jié) in China and many countries around the world. Commonly known simply as “5-1” (五一  wǔ yī), it’s one of many short public holidays in China. Actually, it used to be one of three Golden Weeks (黄金周 huáng jīn zhōu) but it was shortened in favor of adding a few other traditional festivals to the calendar. I’ve had some rather interesting experiences traveling in China during this holiday to say the least and I’d like to share them with you today! But first, a quick word about the confusing way China organizes these short holidays…

The Confusing Holiday Calendar in China

Being from the USA (美国 měi guó), I grew up being accustomed to having a long weekend for holidays like Labor Day and Memorial Day (纪念日 jì niàn rì). We just get an extra day off and that’s it. There’s nothing complicated about it. Over in China, let’s just say they do things a bit differently…

Even though Labor Day is no longer a Golden Week in China, they still try to make it a 5-day holiday. People only actually get one day off, though. How does a one-day holiday make for such a long weekend? This happens because people need to go to school or work on the weekend before and after the holiday. 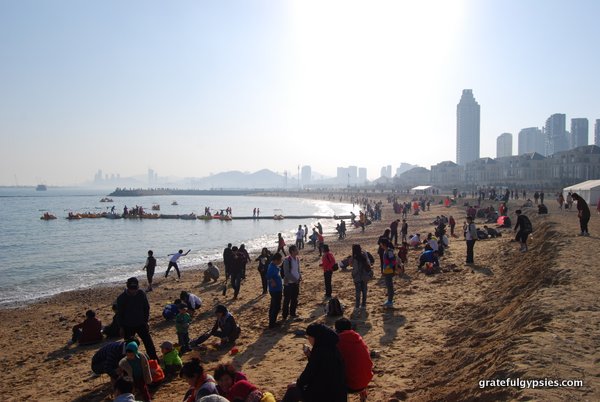 Labor Day crowd on the beach in Dalian.

If you take a look at the holiday calendar for 2020 in China, you’ll see that the holiday goes from May 1-5. You’ll also see special extra working days on April 26 and May 9. This means working for 6 days one week, having 5 days in a row off the next, and then once again working 6 days in a row the week after that.

If this system sounds confusing (令人困惑 lìng rén kùn huò), it’s because it is. Even though China does this every year for several different holidays, it’s always a mess. When I was teaching English in China, these kinds of holiday schedules always caused mass chaos. Eventually my center just gave up on following the government schedule because it was such a disaster trying to schedule classes around it!

I discussed the holidays and a lot more in a post I wrote a few years back called “What’s it Really Like Working in China?” Go and give that a read if you’re curious to know more about the culture of work in China. I also wrote a detailed post about China’s workforce in honor of Labor Day that’s full of interesting information.

Throughout my years in China, I had several interesting experiences over the Wu-Yi holiday. In fact, these remain some of my most hilarious stories from my time there…

Sleeping in a KTV

In 2010 I had just moved back to Beijing, this time with my girlfriend in tow. We met at a camping music festival in the States, so you can imagine our excitement when we saw a post online about the Yixian Camping Music Festival (易县露营音乐节 yì xiàn lù yíng yīn yuè jié). After a few months in the city, we were both ready to escape the smog and camp out under the stars, even if we didn’t know a single artist on the lineup.

There was just one tricky thing about going to this festival – we had no idea how to get there. The website said to take the train to Baoding (保定 – bǎo dìng) and then switch to a bus, so we went for it. Before heading to the train station, we went to Wal-Mart (沃尔玛 – wò ēr mǎ) in search of camping gear.

It being a holiday weekend, the trains were sold out for several hours. With nothing else to do, my buddy and I started slamming beers and eating kebabs (串 – chuàn) in a random hutong. Before long, we made friends with locals who offered us some baijiu (白酒 – bái jiǔ). Needless to say, we boarded that train a bit tipsy… 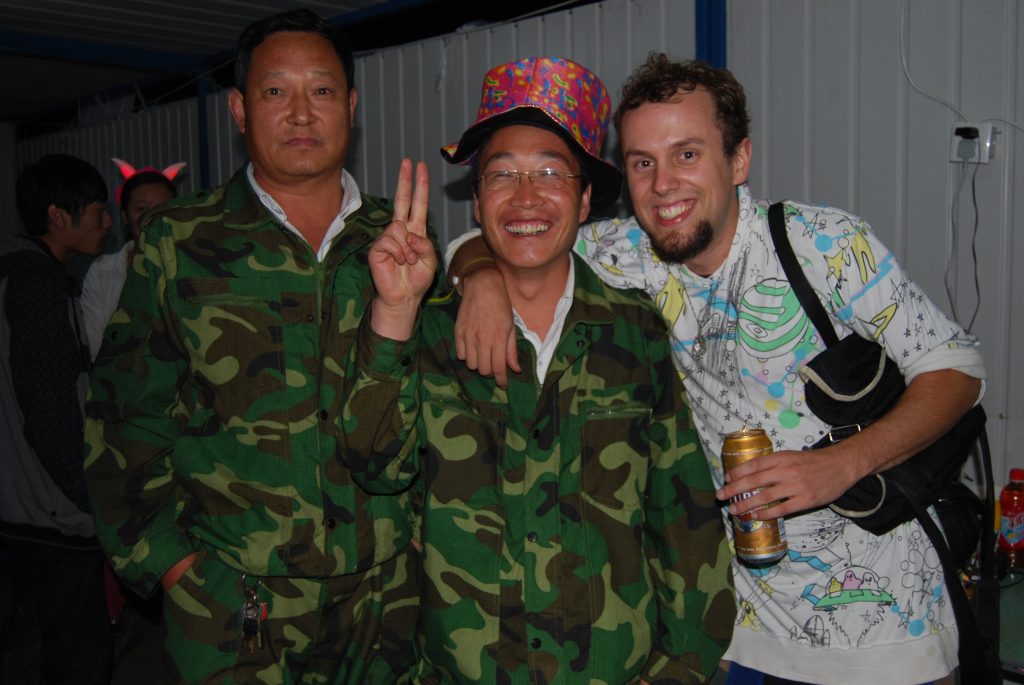 A trio of out of control rock and roll fans!

To make a long story short, we couldn’t figure out the bus for the life of us after arriving in Baoding. Despite having the address and name of the festival in Chinese, no locals seemed to have any clue what we were talking about. My Chinese was (and still is) “horse horse tiger tiger” (马马虎虎 mǎ mǎ hǔ hǔ), so I had faith in my ability to get us there.

Well, a few failed bus and cab rides later that faith was dwindling. It was getting dark, my friend and I were full on drunk at this point, and my girlfriend was about ready to cry. We threw in the towel and decided to get a hotel, but none of us had brought our passports (护照 – hù zhào) with us. If you’re a laowai, there’s no way you’re checking into a Chinese hotel without one!

Stuck in the middle of nowhere with nowhere to go, we ended up going to a karaoke bar and just paying for a few hours to sleep on the couch. In the morning, the nice woman working there helped us get a cab to take us to the festival. We finally made it! 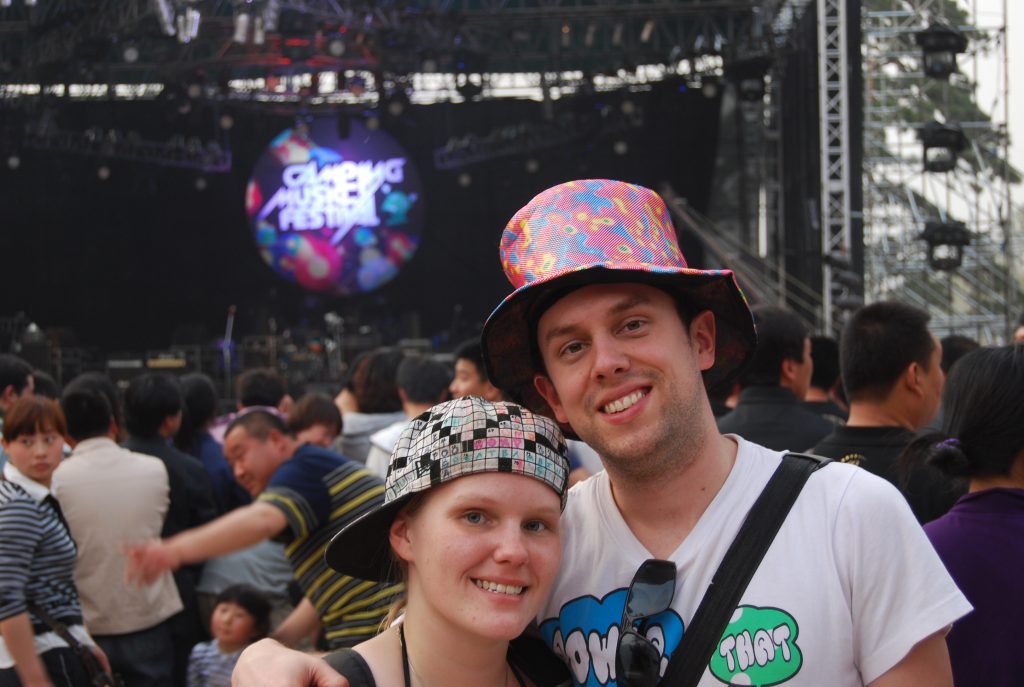 A Chinese music festival. Why not?

Was it worth it? To be honest, probably not. There were two festivals in Beijing that weekend that we could have just gone to and slept comfortably in our apartment. However, I’m still telling this story ten years later so I’d say that alone makes it worth the struggle we endured!

If you want to read the full tale of this ridiculous May Day adventure, here it is – Part One, Part Two.

The Worst Tour Ever

A few years later, we tried once again to embark on a Labor Day trip. This time we took the train to Dalian (大连 dà lián) – a coastal city in Liaoning province. We figured a few days hanging out by the Yellow Sea (黄海 huáng hǎi) eating fresh seafood (海鲜 hǎi xiān) would be nice. Little did we know it would soon turn into the trip from hell…

Arriving in Dalian after an overnight train, I called our hotel for directions. They claimed they were full and had no record of my reservation. This was 2013 and neither of us had smartphones yet, so we were just stuck among the massive holiday crowd with nowhere to go.

We started to walk around in search of a hotel that still had rooms at a reasonable rate. The first few places were outright rip-offs and it wasn’t looking good. Then one lady offered us a pretty good deal on a room so long as we joined one of their tours. I’ve had awful experiences with tour groups (旅游团 lǚ yóu tuán) in China so I was very hesitant, but we decided to go for it simply for a lack of better options. 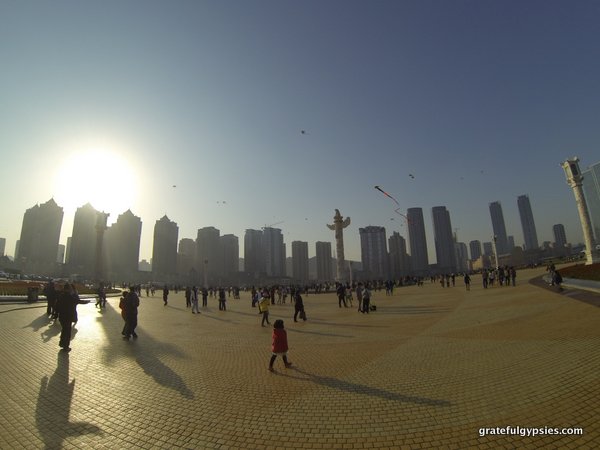 One of Dalian’s many, many squares.

Looking back on this day tour, it was so ridiculously bad it’s hard to believe it actually happened. Some of the highlights included visiting a snake museum and a wildlife park where we were told about the “Cola Bear” (可乐熊 kě lè xióng). They seriously told people that the bears liked to drink Pepsi and sold them bottles of it at 3x the normal price to throw to them. Needless to say, the bears did not drink a sip of cola.

The tour was so laughably bad that I ended up buying a cheap bottle of whiskey (威士忌酒 wēi shì jì jiǔ) just to get through the damn thing. It ended prematurely when I got into a battle of curse words with the horrendous tour guide and we ditched the group to make our own way back to the city.

Let this be a word of warning to you – never, ever, under any circumstances, join a random tour group in China. I don’t care how bad your Chinese is. Getting lost and confused is far better of a situation to be in than being on one of these tours! Just watch the video and see for yourself…

They say the third time’s the charm, and that proved true for me after two abysmal failures traveling during this holiday.

When we were living in Kunming (昆明 kūn míng), we decided to return to one of our favorite places over the Wu-Yi holiday. The town of Dali (大理 dà lǐ) is a beautiful place surrounded by mountains and Erhai Lake (洱海 Ěr hǎi). 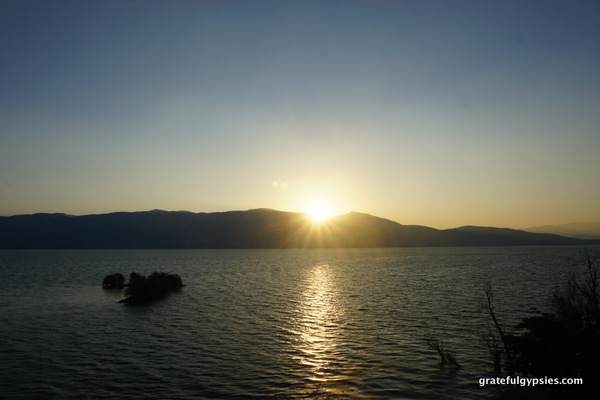 Rather than stay in the historic Old Town, which is basically just a big tourist trap, we stayed in the quaint village of Caicun (才村 cái cūn) on the lake. Despite it being a major holiday and there being a ton of tourists in Dali, it was very peaceful in the village.

We enjoyed cycling around the lake and hiking up in the mountains. After a big day of exploring, we sampled the local specialty of sour-spicy fish (酸辣鱼 suān là yú) as well as some local craft beer. It was a great break from the big city and one of my favorite trips.

You can read more about our trip to Dali in this post and check out a short highlight video below:

Well that was a fun walk down memory lane. Despite those first two experiences being incredibly stressful experiences at the time, at least I can laugh at them now!

If you’ve experienced Labor Day in China, I’d love to hear about your experiences. Leave a comment below and answer these questions in Chinese for practice!