Oceania in Chinese Posted by sasha on Mar 23, 2016 in Uncategorized

We’ve been all over the world on our ongoing Chinese geography lesson. In case you’ve missed any of the past posts, here are the links for you to bookmark:

We’ve still got two continents to cover – Antarctica (南极洲 – nán jí zhōu) and Australia (澳洲 – Ào zhōu), also sometimes referred to as Oceania (大洋洲 – dà yáng zhōu). It’s not just a clever name, as this region is surrounded by oceans. This is the smallest continent in the world, consisting of the Australian mainland along with many other islands. Some are quite large, such as New Zealand, while others such as Nauru are tiny. 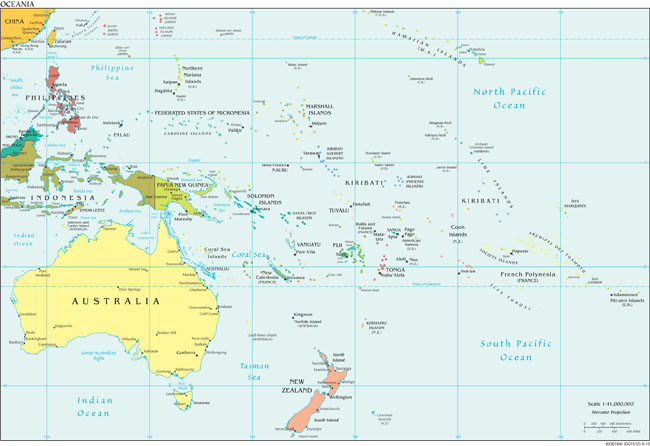 A look at Oceania.

There are 14 independent countries in Australia/Oceania. Here they are in English, Chinese and pinyin:

As it accounts for a vast majority of the area and the population of the continent, let’s take a closer look at Australia. The country is composed of six states and ten territories. Two territories are on the mainland – the Australian Capital Territory and the Northern Territory – while the others are located offshore. Outside of government, the ACT and the Northern Territory are often treated like states because of their large populations and the fact that they’re on the mainland bordering other states. Here are the six states plus the two almost states in Chinese:

While we’re at it, we might as well learn the five biggest cities in Oz in Chinese:

If you’re from down under, it might not be a bad idea to learn a bit of Chinese, as more and more people from the Middle Kingdom are heading to Australia. And they’re not just going on holiday – many Chinese are choosing to study, work, and even buy property in the land of kangaroos. Just watch this short news clip from CCTV about the booming Chinese real estate market in Oz:

Now that we’ve covered all seven continents – there really isn’t much to say about Antarctica (sorry, penguins) – our geography lesson is finished! Now you can go anywhere in the world and know where you are in Chinese. Maybe next month we’ll look beyond our atmosphere for more new Chinese lessons.