Qufu – Hometown of Confucius Posted by sasha on Jul 11, 2016 in Uncategorized

While exploring Shandong province, history and culture lovers should be sure to include a stop in Qufu (曲阜 – qū fù), hometown of Confucius (孔子 – kǒng zǐ). The ancient philosopher, teacher, and politician was born in 551 BC and has remained influential in Chinese culture ever since. In Qufu, you can visit the Three Confucian Sites, known simply as San Kong (三孔 – sān kǒng). The complex was granted UNESCO World Heritage status, as it has “retained its outstanding artistic and historic character due to the devotion of successive Chinese emperors over more than 2,000 years.” Let’s take a closer look at these historical monuments in the hometown of Master Kong: 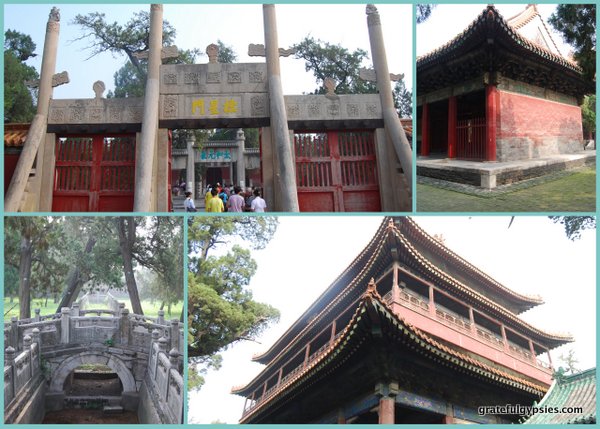 The largest Confucius Temple in China.

Within two years of his death, the former home of Confucius was turned into a temple. While there are Confucius Temples all over China, the one in Qufu is the largest and the most famous. Over the years, many emperors would make the pilgrimage to Qufu to worship Confucius. The temple has been destroyed by fire and rebuilt many times, and much damage was also done during the Cultural Revolution. As the last major renovation was done around the time that the Forbidden City was being built, the architecture of the temple resembles that of the famous palace in Beijing in many ways. 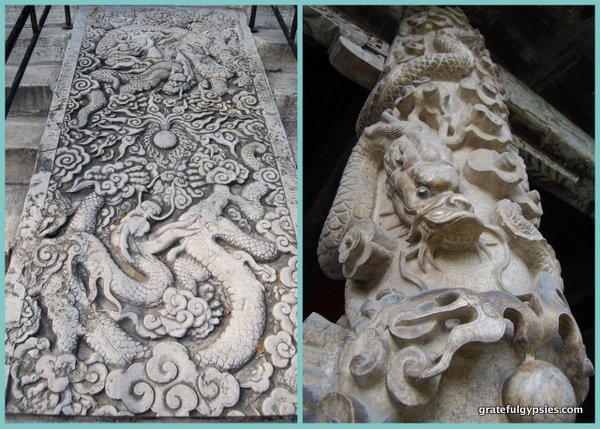 Beautiful designs in the temple.

At the center of the complex is Dacheng Hall (大成殿 – dà chéng diàn). One interesting thing about Qufu is that there aren’t any tall buildings in the city – this is because they’re not allowed to exceed the height of the main hall in the temple. This is a way for the city and its people to show their respect and admiration of the ancient philosopher. 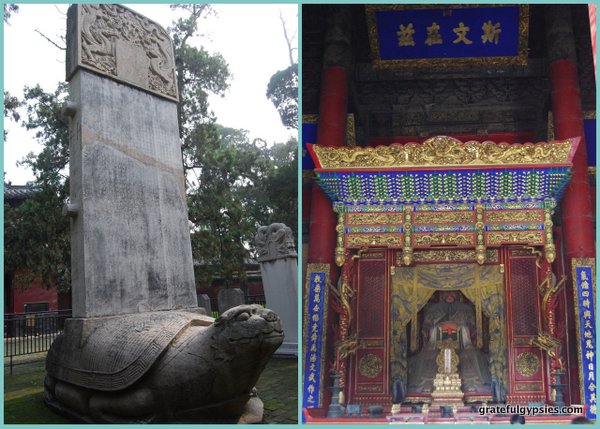 A stele and a shrine in the temple.

Throughout the temple complex, you’ll notice many stele pavilions. These commemorate renovations at the temple, and they also contain texts extolling Confucius as well as imperial edicts granting new honorary titles to the sage. Chances are you won’t be able to read the writing on the steles, but at least you’ll know their purpose. After exploring the temple grounds for an hour or so, head on to the next of the San Kong. 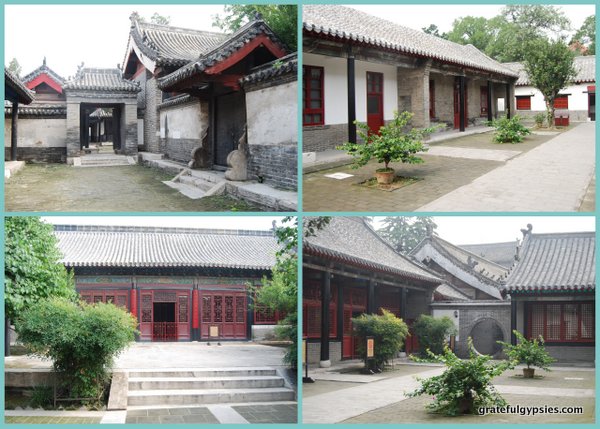 This family mansion was the home of the direct descendants of Confucius. From here, the family tended to the other sites in Qufu, conducted elaborate ceremonies, and and governed the largest private estate in China. It has also undergone many renovations through the centuries, but it remains the best preserved Ming-era complex of its kind. 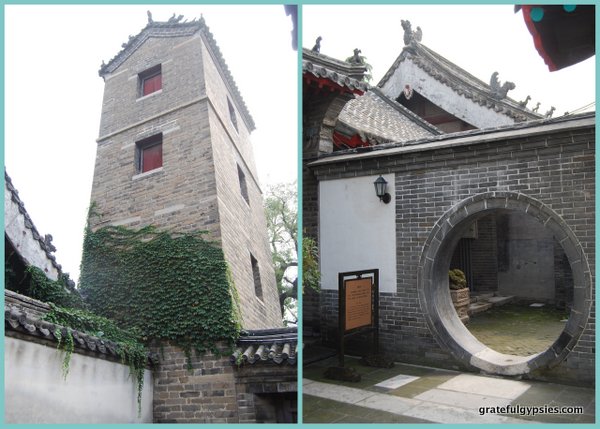 Watchtower in the mansion.

The mansion is now a museum, where you can wander through the many courtyards, see a variety of cultural artifacts, and enjoy the traditional Chinese architecture. The tallest part of the complex is a 4-story tower, which was designed to be used as a shelter in case of an attack. 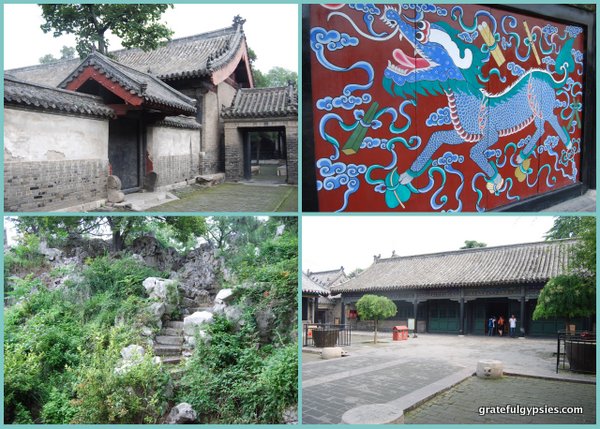 More scenes from the mansion.

The layout of the mansion separates official rooms at the front from residential quarters in the back. Also, the spatial distribution of the buildings according to the seniority, gender, and status of their inhabitants reflects the Confucian principle of order and hierarchy. At the back of the complex, you’ll find a nice garden which is a great place to end your visit. 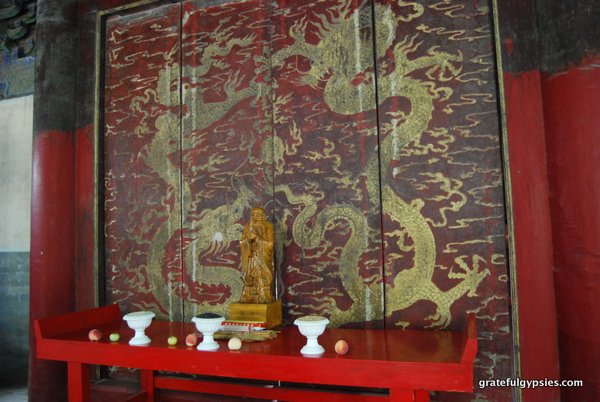 A shrine in the cemetery.

After visiting the temple and the mansion, you can see the final resting place of Master Kong. Confucius himself and many thousands of his descendants are buried here at this massive cemetery. The oldest graves here date back to the Zhou Dynasty, while the most recent belong to descendants of the 78th generation of the Kong family. 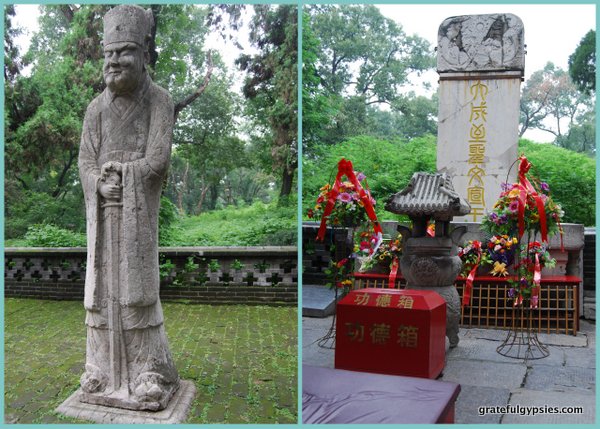 Thousands of people visit the cemetery every day to pay their respects to Confucius and his descendants. To the east of his tomb lies the tomb of his son, and to the south that of his grandson. This configuration is known as “holding the son and hugging the grandson” and is considered an ideal family pattern in China. 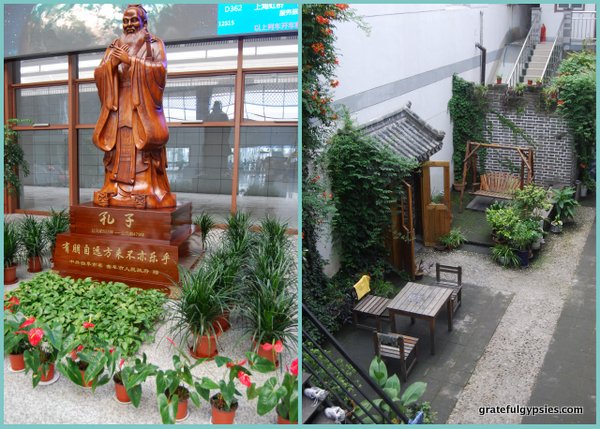 Qufu is accessible by train and there are even a few high-speed lines that stop there. It’s also possible to visit by bus from other destinations in Shandong province such as Jinan or Qingdao. There’s also an international youth hostel here, which is the perfect place to stay for exploring the city’s cultural sites. 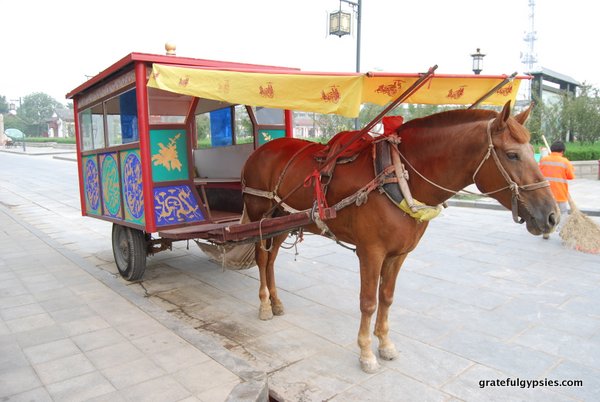 You can easily walk around much of the city, but there are plenty of other options if you need to give your feet a rest. There are local buses, taxis, rickshaws, and even horse-drawn carriages.

If you’re interested in learning more about Confucius and his teachings, check out this post with some of his most famous quotes, in both Chinese and English.