A Decade with Premier Mark Rutte Posted by Karoly Molina on Oct 14, 2020 in Uncategorized

This month marks the 10th anniversary of Prime Minister Mark Rutte as the head of the Dutch government. The 10 years have been marked by a world-wide financial crisis and its aftermath, the shooting of flight MH17 in Ukraine, the refugee crisis, Brexit and the COVID-19 pandemic. In this post, I want to point out a few highlights and lowlights of our very own Minister President Mark Rutte. 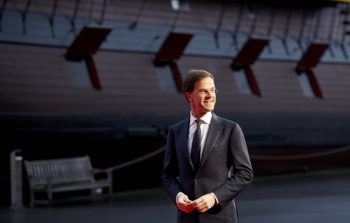 Photo taken by EU2016 NL found on Flickr.com with license CC BY 2.0

Mark Rutte is one of seven children. His father, Izaak Rutte worked for a trade company in Indonesia. During WWII, Izaak and his first wife, Petronella Hermanna Dilling, were prisoners of war in modern-day Jakarta. Petronella did not survive the camp, but Izaak did. Later on, he married his deceased wife’s sister Mieke Dilling and had 4 children including Mark Rutte, in addition to the 3 Izaak had with Petronella.

After finishing high school, Mark Rutte started his studies at a conservatorium to study piano, however, he changed his mind and went to study geschiedenis or history at the University of Leiden. After finishing his Masters, he began working for Unilever. Since his time at university, Rutte was part of the liberal youth political organization JOVD, and later on became an official lid or member of his current political party VVD. In 2002, Rutte became staatsecretaris van Sociale Zaken en Werkgelengenheid, and proceeded to move around several positions until becoming lijsttrekker or lead candidate for the VVD.

Rutte has been Minister President for three election cycles; these are commonly referred to as Rutte 1, Rutte 2, and Rutte 3. Winning the most votes, however, does not mean that the VVD or the Volkspartij voor Vrijheid en Democratie, has a majority in either kamer. Because the Netherlands has several parties, each cycle, they’ve had to create a coalition or coalitie with other parties. Mark Rutte is the first liberal prime minister since 1918; the conservative political parties PvdA and CDA had been on the lead since.

Throughout his 10 years leading the Dutch government, Premier Rutte has kept an image of a ‘normal’ person. He lives in the same apartment he purchased right after college, he still owns his old Saab car, and he cycles everywhere he goes. In the next section, I want to point out a few ‘normal’ moments or habits of our prime minister.

You might remember an old video of Mark Rutte opruiming or cleaning up coffee he spilled.  This video became very popular with international news outlets picking it up. The video was meant to show Rutte as a down-to-earth premier, however, some saw this as a publicity stunt. Regardless of his intentions, the gesture is not lost.

The Dutch newspaper NRC had a few articles about Premier Rutte’s 10 years as head of the Dutch government with several photographs of press conferences and such. One article that caught my attention had a collection of photos of Mark Rutte cycling. You see him cycling with his usual white button up shirt slightly unbuttoned, cycling while eating an apple, locking his bike at the palace, and even cycling with the Dutch military in Afghanistan. If you do a quick internet search of ‘Mark Rutte fietsen,’ you will find a thorough collection of photos of Mark Rutte fietsen. One of the many famous videos of Rutte cycling was during the discussions to change the pensions in 2019.

But not everything surrounding Premier Rutte is positive. There have been several instances throughout the 10 years where he has been controversial. Just last year, Sten blogged about Rutte’s choice of words when he was asked about a firework ban due to attacks towards emergency personnel. He stated ‘Ik zou ze het liefst persoonlijk in elkaar slaan, die lui die dat doen, maar dat gaat niet.”

The recent covid-19 pandemic also has put him on the spotlight. While the infections continue to increase, the Dutch government refuses to make certain things mandatory such as wearing face masks. Some feel that the advies is not enough; masks should be verplicht. But the most colorful display of words from Mark Rutte came a few weeks ago when soccer fans were yelling during a soccer match despite that being verboden or forbidden. His reaction after the event was ‘gewoon je bek houden‘ which translate to something like just shut your mouth.

There are also the political controversies such as the government’s reduction in social programs. According to the NRC article I mentioned above titled ‘Van Rutte moeten mensen het zélf doen,‘ Rutte’s vision is of people being more responsible for themselves rather than expecting the government to take care of everything. This is in line with many changes to the social welfare programs, reduction in elderly care, among other changes that his party has been responsible for. If you are interested in hearing more about Rutte’s 10 years, I recommend this podcast by NRC.

Next year will be interesting times for politics in the Netherlands. The Dutch will once again go naar de stembus to vote for their party and candidates. The aanpak of the corona pandemic will certainly play a role in the campaigns as well as the stemmen or votes.  Rutte has said he would like to continue his work as Minister President, but this will mostly depend on the uitslag as well as his party’s future plans. The following video from the NOS Jeugdjournaal explains more.