The Dutch in America – What is a patroon? Posted by Sten on Feb 15, 2021 in Culture, Dutch Language, Dutch Vocabulary

Recently, I’ve been indulging in the video game Assassin’s Creed IV: Black Flag, which tells the story of a young Welshman who arrives in the West Indies in 1712, during the Golden Age of Piracy, looking to make a name and get rich as a pirate. At this point, the English and Spanish reigned the seas in the region. The Gouden Eeuw (Golden Age) had died down for the Dutch. However, there are traces of the Dutch even in the game. One of the antagonists, slave trader and plantation owner Laurens Prins (anglicized as Lawrence Prince) is Dutch, for example. He even comes with a Dutch accent. Another word I came across in the game that looked oddly Dutch to me was patroon. But it wasn’t used as a Dutch word, but as an English one. Such “patroons” had patroonschappen (patroonships). What are they, and how did they survive even after the War of Independence was won? In this new series, The Dutch in America, I will explore the Dutch influence in the United States. There’s plenty!

What is a patroon in Dutch? 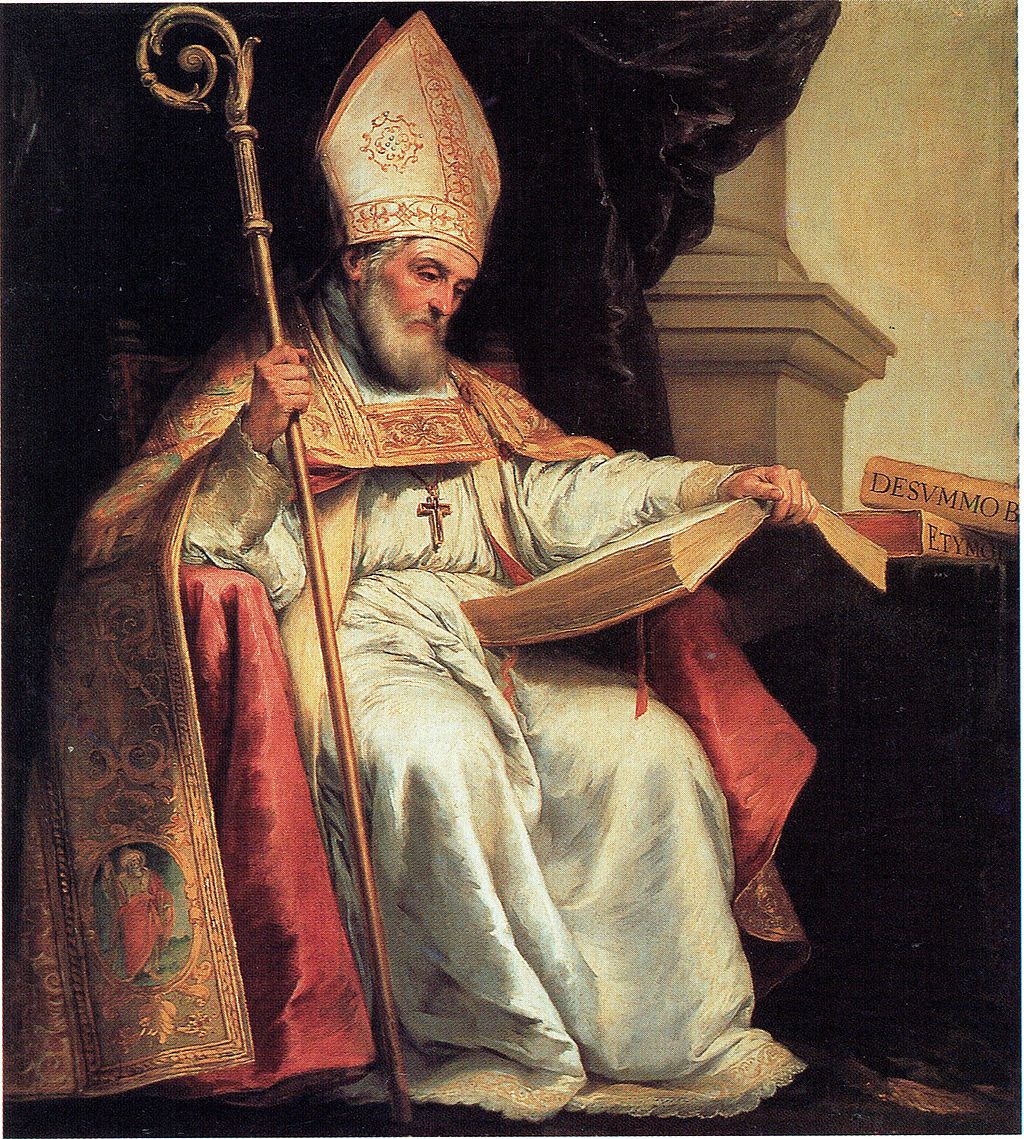 A patroon, in this case more commonly referred to as beschermheilige (patron saint). This is Isidore of Seville, the patron of the Internet (Image public domain, from Commons.wikimedia.org)

When looking at the word patroon, it immediately reminds of the English term patron. Both have the same Latin origin of patronus. Both the Dutch and English term also have that same meaning: beschermheer (“protector”, patron). In Dutch, it can more frequently also mean a baas (boss) or manager (manager). Interestingly, patroon also has two other meanings:

Let’s go on a little tangent and find out where these words come from. Because their meaning seems quite different than the first one. Or is it? 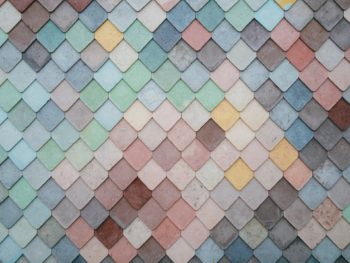 Image by Stocksnap at Pixabay.com

The second meaning as pattern comes from the French patron, where the word, again, has the same Latin root. However, the meaning of pattern, or model, comes from the idea that this first design is the one that stands as the father for its sons and daughters – the designs that come after the patroon that are based on it. So in this sense, that first model is a patroon. 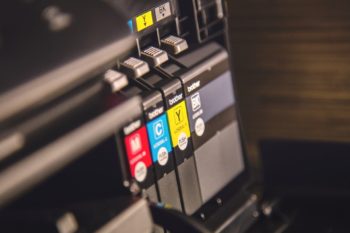 This comes from the German die Patrone (the cartridge). Again, the meaning comes from the model of how much kruit (gunpowder) went into the gun. Later, when bullets got a metal casing, the name stuck. From this meaning, other words have also been derived, such as de inktpatroon (the ink cartridge) for printers.

One last note on the main meaning of “protector”: the meervoud (plural) is de patroons. So that may help distinguish between the different meanings. It is, also, the same meervoud as the English adoption of the word: the patroon, the patroons. Also, the main meaning is not the most common one by far. Both the meaning as design and as cartridge are a lot more common.

So if English has the word patron, and it means the same as the Dutch word, what is a patroon in English?

What is a “patroon” in English? 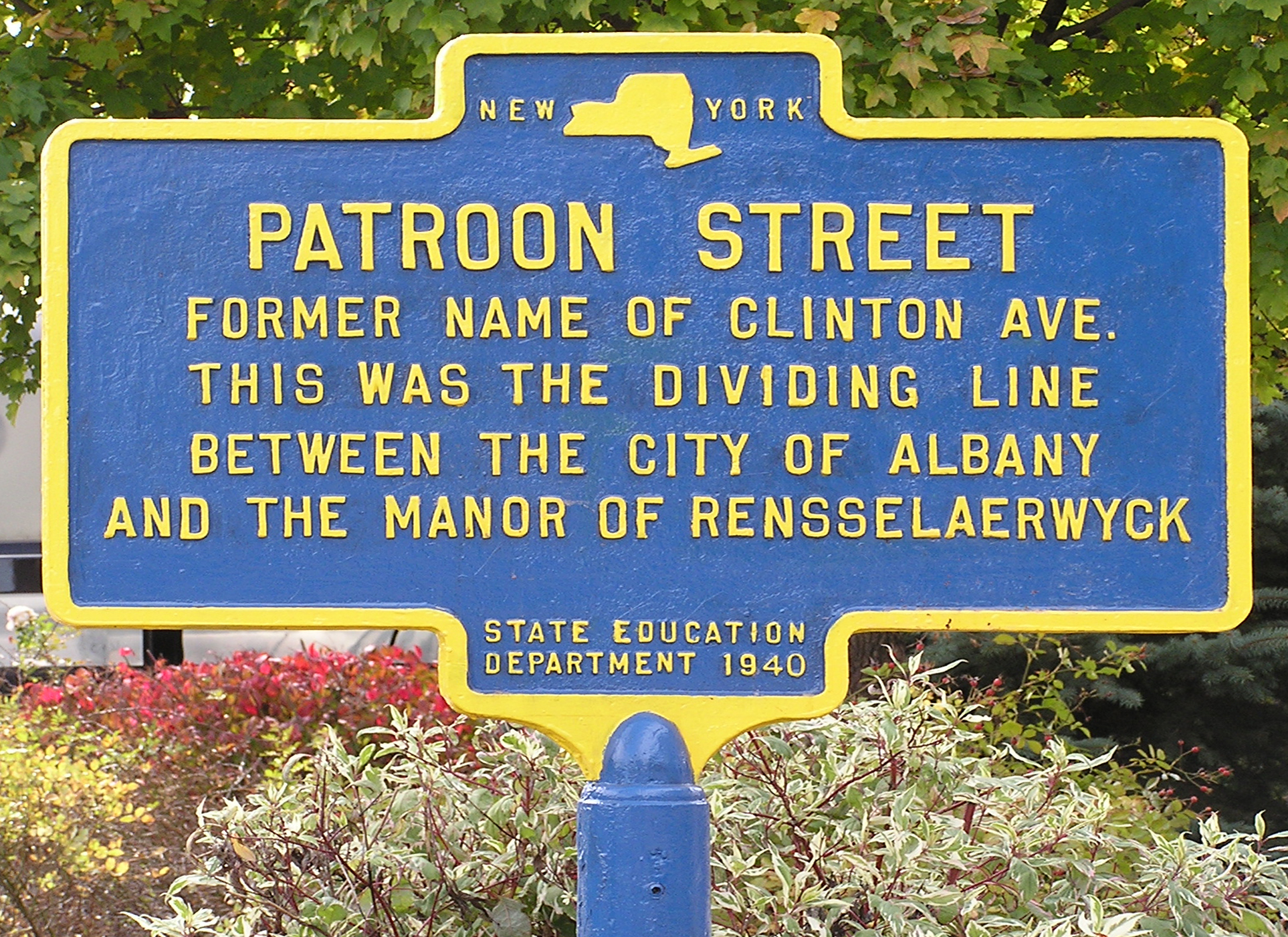 A historical marker from 1940 at Clinton Square (Pearl St.) in Albany. This was the dividing line between the City of Albany and the Manor of Rensselaerwyck. (Image by Igoldste at Commons.wikimedia.org under license CC BY SA 3.0)
State Education
Department 1940

The English “patroon” which was directly taken from the Dutch, was the name of a Dutch landowner in the Dutch colonies of the New Netherlands on the East Coast of the US. This included New York, at the time Nieuw Amsterdam (New Amsterdam), which was the capital of the territory.

Patroonschappen (patroonships) were granted by the West-Indische Compagnie (WIC) (West Indian Company) from 1629 on to attract more Dutch people to move to the Americas. Such a patroonschap granted large estates along navigable rivers, where settlements of 50 persons had to be established within four years. The rights these patroons were given were significant.

A patroon could establish his own laws, courts and appoint local officers. Settlers had to pay patroons in money, goods or services. However, manufacturing was prohibited and commerce was heavily limited. So these areas were strictly meant for housing, not work. However, in 1640 this changed with an update to the policy. Manufacturing was now permitted, and estates could be obtained by Dutch settlers in good standing.

But the whole idea to create a flourishing Dutch settlement in the New Land failed. Due to raids from Native Americans, general mismanagement and lack of cooperation, the era of patroonschappen soon came to an end. The only patroonschap to survive was the Rensselaerswyck, a massive estate on the Hudson. This estate was held by the Van Rensselaer family until the mid-19th century! The patroon at the time, Stephen van Rensselaer III, is the tenth-richest American in history, worth $88 billion in 2007 dollars. You can read more about the family and their estate here.

Even after the English took over the area from the Dutch, the system of patroonschappen did not change much until 1775, when the patroons became proprietors of estates. So over a hundred year period, the Dutch word established itself in the English vocabulary, and “patroon” stuck.

So there you go. The Dutch brought landowners to the Americas, which also came along with a word that found its way into the English vocabulary.

Did you know about the patroonschappen? Have you visited one or know more about it or the word patroon? I want to know, so please tell me in the comments below!