De Wereld Draait Door, or short DWDD had its last uitzending (broadcast, episode) last Friday. It was one of the hoekstenen (cornerstones) of Dutch television for 15 years. Here’s a little look at this programma (program), and what made it so popular.

What’s in a name?

First, let’s just talk about the name for a minute. De Wereld Draait Door is a play on words. It means “The World Keeps On Turning”, from draaien (to turn) and door (further). However, doordraaien is also its own verb, meaning “to go crazy”, so you could also translate it as “The World Is Going Crazy”. This reflects the tone of the programma quite well.

What was it about?

With gasten (guests) from all walks of life, the presentator (host) would talk about actualiteiten (current events), news and interviewing the guests every weekday. This was mixed with several rubrieken (features), like LuckyTV, de Jakhalzen and live music. In addition, kijkers (viewers) were asked to send in fragmenten (fragments) of opmerkelijke (remarkable) or grappige (funny) things they saw somewhere. These fragmenten were put together in a rubriek called De TV draait door (The TV goes crazy). Above a rubriek of that. LuckyTV was a rubriek where TV fragments were remixed and dubbed. One of my (and many others’) favorites is the dub for Koning Willem-Alexander (King Willem-Alexander), our current head of state. In the dubbed fragments, he is nicknamed Willie and acts rudely. De Jakhalzen consisted of a group of guys with black overhemden (shirts) and red stropdassen (ties), who would spontaneously interview politicians and other people. 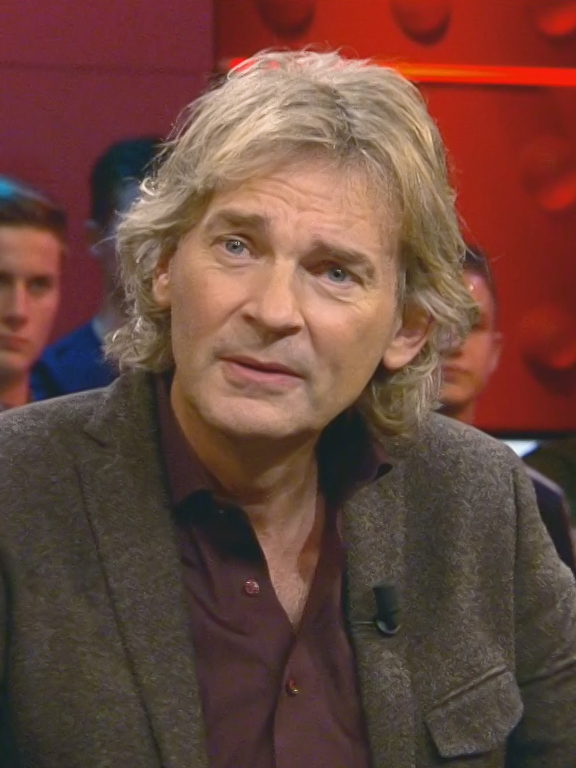 Matthijs van Nieuwkerk in the DWDD Studio in 2018 (Image by DWDD at Commons.wikimedia.org under license CC BY 3.0)

Talking about the presentatoren – while there were several presentatoren, the one that stood out and became synonymous with the programma is Matthijs van Nieuwkerk. He was there from the beginning in 2005 till the end, last Friday. With him is Marc-Marie Huijbregts, a Dutch comedian and one of the first tafelheren (sidekick). Tafelheren and tafeldames were introduced to interact more with the gasten and have a more vivid conversation. They were often bekende Nederlanders (well-known Dutch people).

If you want to look back and see what the show looks like, you can watch much of it online. Here is a link to the very last uitzending. And yes, it is without an audience, since in the last two weeks of the show, an audience was not allowed due to tightened rules around the Coronavirus.

In the uitzending, Van Nieuwkerk and Marc-Marie reflect on the 15 years. Ilse de Lange, a famous Dutch singer, sings Turn! Turn! Turn! by The Byrds at the request of Van Nieuwkerk – of course a nod to the name of the show. And the show ends with a performance by Henny Vrienten and a song he wrote specially for the last episode. It is called Tot Zover (Thus Far), and that is the motto that the episode ends with:

(The adventure is over. 15 years De Wereld Draait Door. Thank you for watching!)

With these words, Matthijs van Nieuwkerk ends the final seconds of the show. Both he and Marc-Marie are clearly very emotional, and close to crying. But they kept the floodgates shut!

I have to say, we’ve used fragments from DWDD to talk about actualiteiten over the years plenty here on the blog. While I didn’t watch it religiously, it was a great show with interesting guests and lively conversations. It’s a shame we’re losing this titan of Dutch prime-time TV, and it may not be easy to replace. But let’s see what the future brings!

Have you watched DWDD before? Do you like the show? Let me know in the comments below!