The Top 5 Facebook Pages You Should Like if You Really Wanna Learn Dutch Posted by tiffany on Jul 3, 2013 in Dutch Language 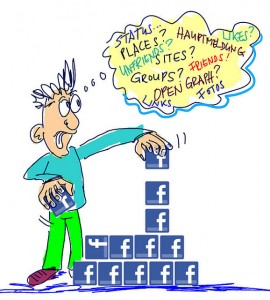 Since my Top 4 Twitter Accounts You Should Be Following if You Really Wanna Learn Dutch post went live, many of you have been saying “Yeah, but what if I’m not on Twitter? What then?”

Well, awesome thing number one is that Facebook also has a wealth of pages created specifically with the Dutch language learner in mind.

So, for those of you not on Twitter, I proudly present…

Dutch Word of the Day – where “learning Dutch can be fun!” The Facebook page goes hand-in-hand with the website of the same name, which shares a different Dutch word each day (well, now how about that?), AND a new Dutch phrase each week (aptly titled “Dutch Phrase of the Week”). The mastermind behind DWOTD is Sander, a Dutch language enthusiast based in Amsterdam. ‘Like’ DWOTD on Facebook (or follow them on Twitter) for the latest word of the week as well as an example of how it’s used in a sentence.

Transparent Dutch – That’s right! We’re on Facebook too!  ‘Like’ us for fun photos, educational videos, helpful hints, links to new blog posts, the word of the day and how to use it, free resources, Dutch news in the Netherlands and abroad, encouragement, and oh-so-much more. We’re here to provide you with everything you need to succeed in your goal to learn Dutch.

Direct Dutch – is the Direct Dutch Institute’s Facebook page. The language learning institute is located in The Hague and has been serving the expat community there since 1985. You’ll find links, articles, photos, videos, translations, vocabulary, links, grammar help and more. Incidentally, they also have a Twitter account 🙂

Dutch Speakwords – I threw this into the post on Twitter accounts to follow just because it is so funny to see how Dutch proverbs and sayings translate literally. But besides being entertaining, it does help to see how the Dutch language is structured.

Goed om te weten (good to know)
Social media has taken over. I don’t have to tell you that. Most businesses/authorities/companies/experts/public figures are on more than one social media network.

So, if someone ever recommends that you follow someone on Twitter, for example, but you’re not on Twitter, do a search for the person on the social media network you do use. Odds are very good that they’re represented there as well.

As you see here, all of the above FB pages have Twitter accounts too. Some of them also have a presence on a number of other social media networks. In fact, many of them crosspost to all their social media platforms, so you’ll get the same great stuff whether you follow them on Twitter, or Facebook, or LinkedIn, or Google Plus, or Foursquare…

If not, a general search on “Dutch language,” “speak Dutch,” “learn Dutch,” or some variation thereof will pull up even more options for you to follow, like, +1, tumble, stumbleupon, etc, etc, etc.