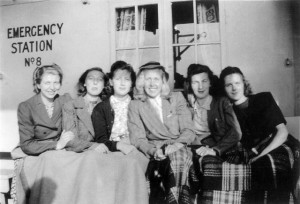 The Netherlands was liberated in 1945. As you can imagine, after years of oppression, there was much dancing and partying and celebration.

And it’s in these sorts of circumstances that boys meet girls.

Young, foreign men in uniform swept Dutch girls off their feet and, often, back to Canada, America, or wherever else with them.

This phenomenon occurred with such frequency that a song was written about it: Trees Heeft een Canadees.

Not trees, as in the tall plants that grow in forests and jungles and are used to make paper. Trees (pronounced “trace”) is a girl’s name. Trees has a Canadian.

Here’s a video of the song, complete with lyrics to the refrain (in Dutch):

You can read the lyrics in their entirety here.

But what does it mean? Here’s a rough translation:

A girl lives in my street
She goes by the name of Trees
A real Dutch appearance
Good looking and plump (if you have a better translation of aardig in d’r vlees, let me know in the comments below)

Though she thinks English isn’t half bad,
She really wants to know what a ‘kiss’ is
Trees has got a Canadian
Oh how smitten the child is

When a Dutch admirer spoke
To her of marriage and such
The answer he got was
“Nothing doing (absolutely not), I’ll buy a bike!”

Now Treesje is studying
Every afternoon she has a lesson
Till now the extent of her English
Was only: “Okay” and “yes!”

Though she thinks English isn’t half bad,
She wants to know what a kiss is
Trees has got a Canadian
Oh how smitten the child is

When she sees a uniform
She goes out of her mind
You ask her “ Do you know what love is?”
She says wistfully: “Very nice!”

Oh, what will happen to Treesje
If her boy from Canada
Disappears before long
To his “home” in Ottawa

Women like Trees were known as “war brides” and left their homes all over Europe and Canada to follow their boys to another country.

If you’re planning to be in the Netherlands between now and November 24, 2013, you can ‘meet’ these women and hear some of their stories at the Canadian War Brides: A one-way passage to love exhibition at the Nationaal Bevrijdingsmuseum 1944-1945 (National Liberation Museum 1944-1945) just outside of Nijmegen in Groesbeek.