Who is Mark Rutte? Posted by Karoly Molina on Jun 8, 2018 in Uncategorized

There has been a video going around about Mark Rutte, the Dutch Prime Minister, cleaning up after spilling some coffee while entering a building. 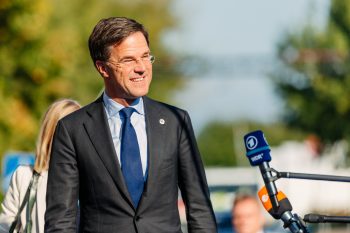 Photo taken by EU2017EE found on Flickr.com with license CC BY 2.0

After the video went viral, The Washington Post has named him a symbol of etiquette while other news sources have called the bluff on his publicity stunt. Regardless of the reasons behind it, Rutte did attempt to clean up his coffee while the custodial staff provided him with the tools and some encouragement.

But who is this coffee-cleaning Minister-President of the lowlands?

Mark Rutte was born on February 14, 1967, in The Hague. He comes from your average Dutch family from South Holland. Rutte focused on arts during his high school years but switched to history in college. He attended Leiden University and completed his masters there. After his studies, he began working at Unilever, and since the early 90s has been an active member of the VVD (Volkspartij voor Vrijheid en Democratie).

Rutte traded his business career for politics in 2002. He was state secretary for Sociale Zaken and later Onderwijs, Cultuur en Wetenschap. In 2006 he became fractievoorzitter or party leader in the Tweede Kamer.  In 2010, under Rutte’s leadership, the VVD became the biggest party in the Netherlands holding 31 of the 150 seats, and the term nicknamed Rutte I began. In 2012, Rutte II began when the VVD won 41 seats, the highest ever held for the party, and became the first cabinet since 1998 that completed their elected session. Last year’s election was also favorable for the VVD and Rutte became Prime Minister a third time. We are now in the Rutte III period.

Mark Rutte’s time as Minister President has been received with mixed feelings. Some give him and his cabinet credit for getting the Netherlands out of the financial crisis much better than other European countries. This, of course, meant cuts and changes, which has won him much criticism. One of the most controversial decisions of his cabinet was to increase the pensioenleeftijd or the retirement age, which many found outrageous.

Mark Rutte has become quite a public figure in the Netherlands. He has certainly embraced social media to promote the work the cabinet does (even though his opponent, Geert Wilders, seems to have higher social media reach).

As an outsider, I find Mark Rutte and the majority of Dutch politicians quite down to earth, at least compared to the U.S. You can see them riding their bikes to the work in The Hague, wait for taxis at the airport in New York, and, this week, cleaning up the coffee they spilled. It seems the modest, down-to-earth Dutch mentality is present even in the highest offices.

What do you think of Mark Rutte and Dutch politicians in general?