Why The Dutch Are Obsessed With Koffie Posted by Sten on Aug 5, 2019 in Culture, Dutch Language, Dutch Vocabulary

The British have their thee (tea), the Germans have their bier (beer) and the French have their wijn (wine). And the Dutch? The Dutch, they have their koffie (coffee). With an average of about 4 cups a day, the Dutch are one of the biggest coffee drinkers in the world. 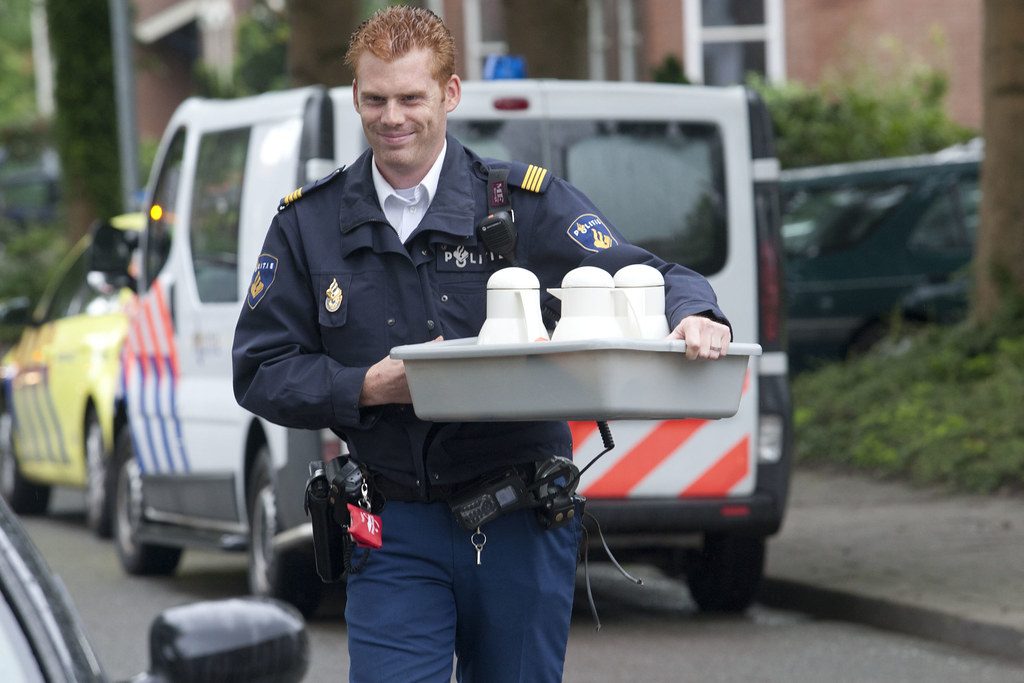 Even the police helps out getting koffie! (Image by Jos @ FPS-Groningen at Flickr.com under license CC BY 2.0)

Yes, an average of 4 cups a day. At least, that is what a Dutch ministerie (ministry) found in 2017. Another source says it’s closer to 2.5 cups a day. And even other sources claim that the Dutch do not drink most coffee per day in the world, but that this top spot is held by the Finnish, the Swedish and the Danish. The numbers are a bit confusing, because they are measured differently. The Dutch ministerie based its numbers on a survey where people were asked what they consumed in the previous 24 hours. Other numbers are calculated from sales of coffee in the Netherlands. So it’s not that easy to put a specific number on it. However, what’s clear is that the Dutch are in the top 5 in the world, and koffie is part and parcel of life in the Netherlands.

Well, also that is hard to say. One thing that definitely helps is that it is overal verkrijgbaar (available everywhere). You can get koffie everywhere. And while it is not very cheap in restaurants or koffiezaken (coffee shops), you can get a cup or two for free at work or if you visit somebody (you will most likely get offered a cup). Also some supermarkets have a koffieautomaat (coffee machine) where you can drink some free koffie while you’re doing your groceries!

Another reason may be that the Netherlands, as well as the Scandinavian countries, are rather cold. A drank (beverage) that is lekker warm (nice and warm) helps fight that cold – while also keeping you awake.

Koffie became widespread in Europe in the 1500s and 1600s, and the Dutch managed to take a big chunk of the international koffiehandel (coffee trade). And so, the drink also became popular in the Netherlands. To this day, the Dutch are one of the largest re-exporters of koffie in Europe. And that history may also explain why the Dutch are so into their bakkie.

In 2001, the largest Dutch koffiefabrikant (coffee producer) Douwe Egberts (DE) and the Dutch technology giant Philips (yes, the one of those smart lights for your home and the TVs) came up with a new way of making coffee: with koffiepads (coffee pads). With the Senseo system, they found a gold mine: With more than 20 million machines sold to date, it changed the way we made koffie in the Netherlands. Previously, everybody just made filterkoffie (filter coffee), preferably in large potten (pots) that would be kept warm for hours. Obviously, that makes it easier to offer coffee to somebody too – you already have the hot drink ready!

Despite these padmachines (pad machines) and the more recent cupmachines (cup machines) from the likes of Nespresso, filterkoffie is still extremely popular. It is much cheaper, less wasteful and it is easier to make a big pot koffie for a lot of people. And it doesn’t taste bad! 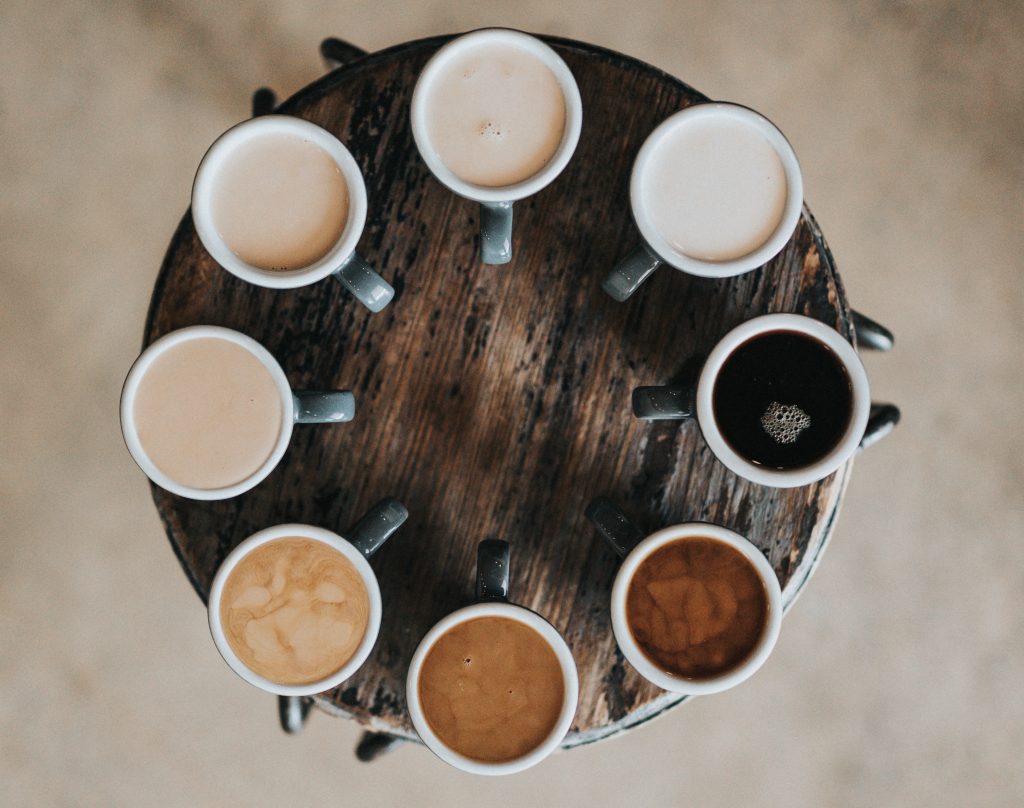 Image by Nathan Dumlao at Unsplash.com

Despite this verslaving (addiction) to koffie, the Dutch don’t have strict rules about how they drink their koffie. Most popular are simply zwart (black), with koffiemelk (coffee milk) and/or suiker (sugar). You don’t see the Dutch using artificial sweeteners much in their koffie, like you see more in the United States. Also very popular is cappuccino, the Italian espresso + opgeschuimde melk (frothed milk) variant. Milk alternatives, like kokosmelk (coconut milk), amandelmelk (almond milk), havermelk (oat milk) and sojamelk (soy milk), to name a few, are also becoming more available by the day.

But any prescriptions on how or when you should drink koffie? No. The Dutch don’t care. You can drink a Latte Macchiato at 11 pm, a Flat White at 2 pm or your third espresso by 9 am. Even drinking thee is accepted!

Little fun fact: The Dutch have their own koffievariant (coffee variant) too: koffie verkeerd (“coffee wrong”), where you just pour more mlek than koffie in your cup. So instead of koffie met melk (coffee with milk), it’s melk met koffie (milk with coffee) – koffie verkeerd! 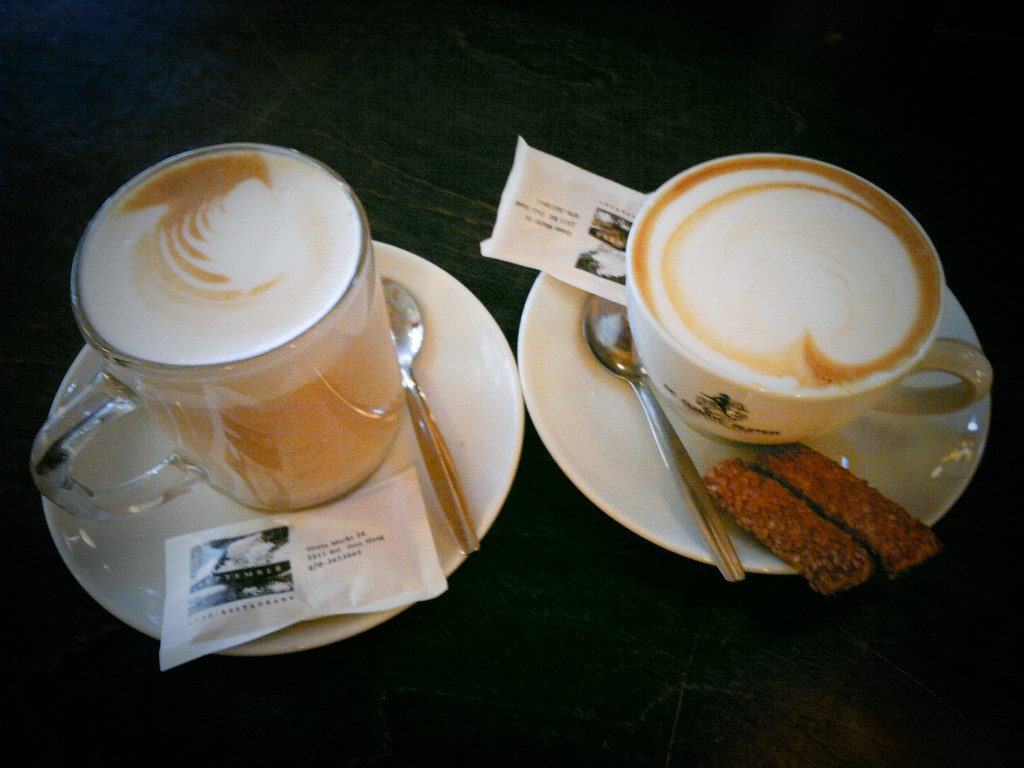 Image by Marco Raaphorst at Flickr.com under license CC BY 2.0

Like peper (pepper), consuming koffie was exclusive to the rich in the early days. The last bit of koffie was not deemed good enough anymore by the rich, so it could be weggepleurd (poured away). The arbeiders (workers) gladly accepted this koffie, and that is where the bakkie pleur comes from. We call a cup of coffee a bakkie pleur to this day.

But with a beverage this popular, there are more words for “a cup of coffee”, of course. Here’s a non-exhaustive list of options:

With the opmars (advance) of Nespresso and Senseo, we also use that, of course:

Wil je een senseootje? (Do you want a cup of Senseo?)

(if you are wondering where the second o comes from after Senseo and Nespresso, it’s related to rules on samenstellingen and verkleinwoorden.)

By the way, if you want to find a place to drink koffie in the Netherlands, be weary using the word coffee shop. The Dutch will almost always think you refer to a place to buy wiet (weed). Instead, try something like:

(Where can I buy a cup of coffee?)

A better translation of coffee shop as a place that serves koffie would be koffietent (“coffee hut”) or koffiebar (coffee bar) or simply café (café).

Is there a koffiecultuur in your country? Do you have any coffee experiences in the Netherlands? What is the main beverage of your culture? Let me know in the comments below!