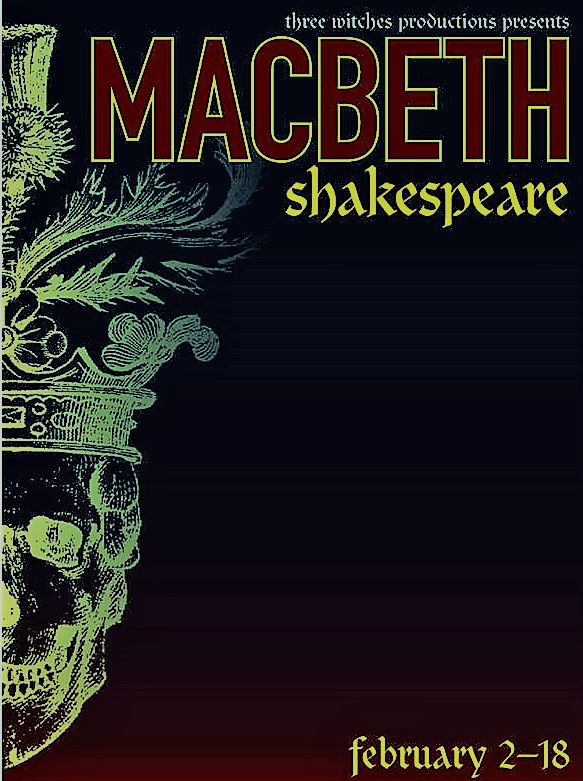 Art and Design by Andrew Pinard

Imagine actors and stagehands working on a play with such a history of misfortune that they won’t even speak the play’s name. In fact, it is such a source of superstitious dread, that to even utter the play’s name in many theaters can get you banished from the building. Perhaps this would not matter so much if not for the fact that the play is by William Shakespeare, is regarded as one of his best, and contains some of the most famous passages in the history of the English language.

I am currently working on a production of Macbeth as an actor, playing several roles including Duncan and The Porter. On the very first day the cast assembled to read the play, we addressed the issue of the play’s curse. If anyone preferred not to speak the play’s name aloud, their feelings would be respected. We would instead refer to it by one of its alternative, less risky titles, like The Scottish Play, or Mackers. It was decided that we’d ignore the play’s curse and carry on as if this were just any play. However, I suspect that some people were simply reluctant to admit their fears, while others might not be fully aware of the show’s history.

The story of Macbeth concerns a valiant 11th-century Scottish lord who, while fighting for his king and country against Norwegian invaders, encounters three witches who prophesize his fate. The lord, Macbeth, along with his ambitious wife, embarks on a bloody campaign to ensure that the witches’ prophecies favoring him come true. He soon learns, however, that there is no tricking fate.

The problem begins with the witches, or the Weird Sisters as they are called by one character in the show. It has long been believed that Shakespeare, in researching for the play, stole actual incantations and black magic secrets and used them in his dialogue. Thus, either the play was cursed by a witch who felt betrayed by Shakespeare, or those incantations contain some hidden curse, or Shakespeare only wrote partial incantations which inadvertently leave every production in some kind of mystical jeopardy. Of course it may just be that, after 500 years, there are bound to be some productions that are subject to bad luck. And, man, has this show been plagued by bad luck!

On opening night of the very first performance of Macbeth, in 1606, the boy actor who was playing Lady Macbeth died backstage.

Macbeth was written by Shakespeare to please the British monarch, King James I, who was an expert on the Dark Arts, witches, and demonology. He even wrote a book on the subject. Unfortunately, Shakespeare appears to have done his job too well. King James was so horrified at what he saw that he banned the play for several years.

The list of misfortunes associated with The Scottish Play is a long one.

If anyone says the name of the play inside a theatre, thus invoking the curse, there are methods for retracting it. Although, these are more just methods of revenge.

I directed a production of Macbeth several years ago, and I am happy to report that there were no serious incidents during that show’s run. We did not, however, actually refer to the show by its cursed name at any time. To this day, my cast refers to that production as Mackers.

As for this current production that I am in, only time will tell. We open next week. But, please, don’t wish us luck. Instead, just hope that we break a leg!