6 German Words For ‘Rascal’ Posted by Constanze on Feb 19, 2016 in Culture, Language

A little while ago I wrote about the untranslatable German word Dreikäsehoch, a term used to light-heartedly mock young kids – especially those who need taking down a peg or two (you can read more on that word by clicking the link).

While I was writing that post, I found plenty of other, equally endearing words that Germans use when talking to, or about, children. They are most likely to be used for misbehaving children and can tend to sound a bit mean when you break them down, but they are not meant in a cruel way. 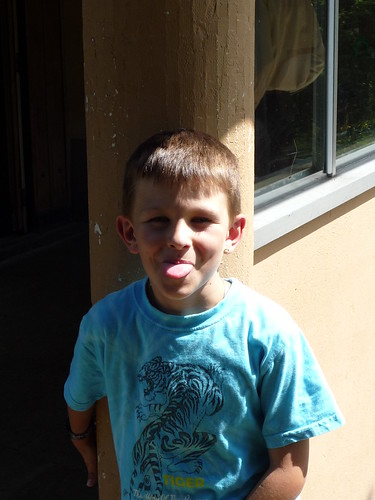 Lausbub. Photo by michael-beat on flickr.com under a CC license (CC by 2.0)

der Bengel
A rascal, usually a little boy, who is naughty and mischievous but who you love, nevertheless.

der Lausebengel
Another word for a rascal, as it uses the word der Bengel, but with the word die Laus it literally becomes ‘louse rascal’. This is a reference to kids getting Kopfläuse – headlice!

der Lausbub
This one is specifically for naughty boys and means ‘louse boy’. Once again we see the word Laus (louse or nit) followed by the word Bub, which is also sometimes spelt Bube. This is basically a different way of saying Junge – boy, thought to originate from the German word for brother – der Bruder.

der Racker
Similar to the English word prankster or tyke, this word describes a child to likes to play (harmless) pranks on people and generally cause mischief.

die Rotznase
A brilliant word and one of my personal favourites, this word is broken down into der Rotz (snot) and die Nase (nose). So, yes, if a child is annoying you, you can call them a Snot Nose! This can both be used literally to describe a child’s snotty nose (‘Jetzt schmiert sie ihre Rotznase am Pullover ab!’ – ‘Now she’s wiping her snot nose on her jumper!’) or to describe the child themself (‘Diese Rotznase geht mir auf die Nerven!’ – ‘This snot nose (brat) is getting on my nerves!’).

die Rotzgöre
One specifically for little girls, this brilliant word is broken down into der Rotz (snot) and die Göre, which roughly translates to little miss or ragamuffin! As the name suggests, it refers to an unkempt, messy, ‘snot-nosed’ little girl who likes to cause trouble.

I hope you’ve enjoyed this post, and if you’ve got any more weird and wonderful words to add to the list, please do so in the comments! Or how about making up your own? 😉 Also, be sure to stay tuned for part 2 of this post!