Fairytales in German Posted by Larissa on Apr 18, 2017 in Literature

German fairytales (Märchen) fascinate me as they are so gruselig (scary)! In English to end a fairytale you would say “And they lived happily ever after…”, whereas in German you would say “und wenn sie nicht gestorben sind, dann leben sie noch heute“, which translates to “and if they haven’t died, then they are still living today”  ..which is not as positive as what we say in English, right?! In this post I want to share my favourite childhood book – Struwwelpeter by Heinrich Hoffmann. 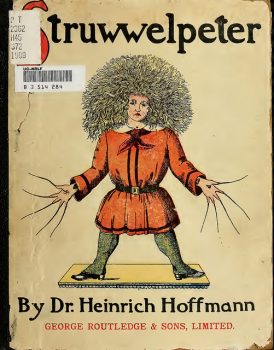 The book consists of various short stories which each have a  moral (just like any other children’s books). These stories however, do not have any happy endings. Each story ends in a brutal way (usually death). Some might say that these stories are not appropriate for children, however when I was a child I didn’t really notice how brutal they were!

One of my favourite stories was “die Geschichte vom Suppen-Kaspar” (the story of the soup “kaspar”). It was about a boy who refused to eat his soup everyday and as he was so stubborn he eventually died of hunger – the end photo being a bowl of soup on top of his grave.

The story that scared me the most was “die Geschichte vom Daumenlutscher” (the story of the thumb-sucker”). This one was about a boy who was warned not to suck his thumbs, and when he disobeys and sucks them anyway, a man appears with a pair of massive scissors and cuts both of his thumbs off. It is safe to say I never sucked my thumbs again after reading the story! 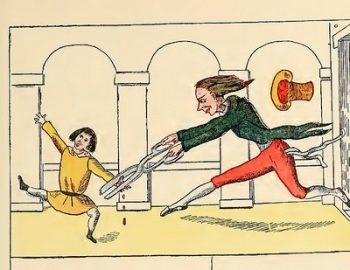 Look how big those scissors are! Photo by Elusive Muse on Flickr. (Public Domain Mark 1.0)

The book was so popular that it was sold in different languages (I remember I had one in German and English). If you are interested in reading the stories you can find them here, or if you want to learn about other German fairytales take a look at this. I will leave you with a part of “die gar traurige Geschichte mit dem Feuerzeug” (the sad story with the matches) to translate for yourselves! This story is about a girl who shouldn’t play with matches. You can leave your translation in the comments below. 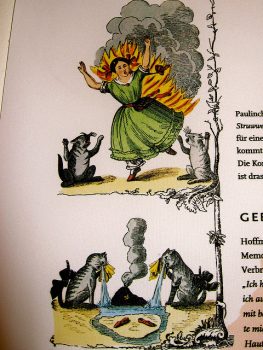 Thanks for reading!
Larissa