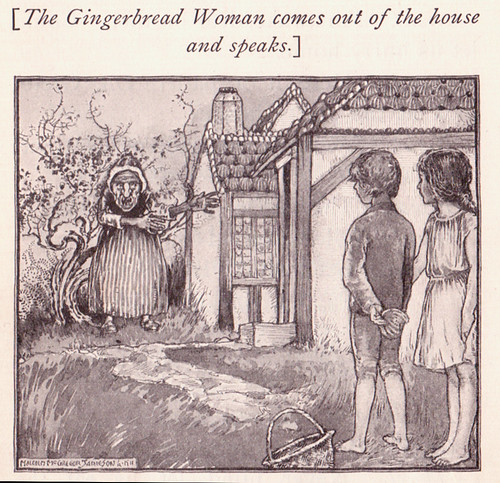 A depiction of a scene from Hansel und Gretel. Foto: perpetualplum on flickr.com under a CC license (CC by 2.0)

Most people will have heard of die Brüder Grimm (the Brothers Grimm) and their Märchen (fairy tales). Perhaps you’ll have read a few of them, or seen the Disney adaptations of these gruesome stories. But who exactly were these famous German brothers, and what is it like reading their fairy tales in German?

Jakob and Wilhelm Grimm, often referred to as die Brüder Grimm, were German academics, linguists and authors from the 19th Century, who re-popularised folk tales including Cinderella, Snow White and The Frog Prince. The original collection of folk tales was called Kinder und Hausmärchen (Children’s And Household Tales). They are also the authors of the Deutsches Wörterbuch – the largest, most comprehensive German language dictionary there is!

Some of the German titles of the Märchen include:

A friend of mine recently gave me a (German) copy of Grimms Märchen, and reading it took me back to my childhood, as adaptations of these grisly stories were often on German TV (daytime/children’s TV!). There has always been some controversy surrounding Grimm’s fairy tales, with people saying they aren’t suitable for children because they’re too scary and violent. In fact, when they were first published, these tales were intended for adults, not children! But there have been many versions published over the years – some ‘scarier’ than others.

To demonstrate how different the Grimm stories are to the Disney adaptations, here is the last sentence or two of Rumpelstilzchen, Schneewittchen and Aschenputtel in my edition of the book (which is apparently very true to the originals):
Rumpelstilzchen (Rumpelstilzkin):

The original ending to Rumpelstilzchen by Wilhelm & Jacob Grimm. Own photo.

‘The devil said that, the devil said that’ the little man screamed, and in a violent rage he stamped his right foot so deep into the earth that it went in right up to his belly. Then, in his anger, he grabbed his left foot with both hands and ripped himself in half.’

The original ending to Schneewittchen by Wilhelm & Jacob Grimm. Own photo.

‘And when she [the wicked Queen] entered she recognised Snow White, and couldn’t move for fear and shock. But there were iron-clad slippers readily placed over a coal fire, and these were brought in with tongs and placed in front of her. She had to put on the burning-hot shoes and dance in them until she fell down dead.’

The original ending to Aschenputtel by Wilhelm & Jacob Grimm. Own photo.

‘The doves pecked out one of each of their [the wicked sisters’] eyes. Afterwards, when they went outside, the older sister was on the left and the younger sister on rhe right: The doves pecked out their other eyes. And so they were punished for their wickedness and deceitfulness with eternal blindness.’

What do you think – too scary for kids? They’re just a little different from the ‘Prince saves the day and they all live happily ever after’ endings we all know and love! Do you prefer these or the Disney versions? 😉

If you’d like to have a go at reading Grimms Märchen in German, here are some links that will help you do just that:

Grimmstories.com – Grimm stories in German, English, and a whole host of other languages!

Germanstories.vcu.edu – Read the German story with the English translation right next to it.

Related vocabulary – What words might you see in a German Grimm fairy tale?