This is part 6 of the series here on the German Blog, the German Nationalparks, a series on the 16 National Parks of Germany. Last week, the beauty of the central Harz was highlighted. The week before, we went to the natural glory of the forests of the Eifel. Preceding that, I discussed Park Müritz, and before that park Berchtesgaden, and the mysterious Schwarzwald. Today, it is time for the Bayerischer Wald!

Bayerischer Wald (Bavarian Forest) is the first German Nationalpark, and was founded already in 1970. Before this, it was a Wirtschaftswald  (commercial forest), used for This is where the idea began to preserve nature by letting it do its own thing in a protected area. This meant also that problems like the Borkenkäfer (bark beetle) were barely fought, because it is a natural process. This brought new chances again:

What is special about the Nationalpark Bayerischer Wald? 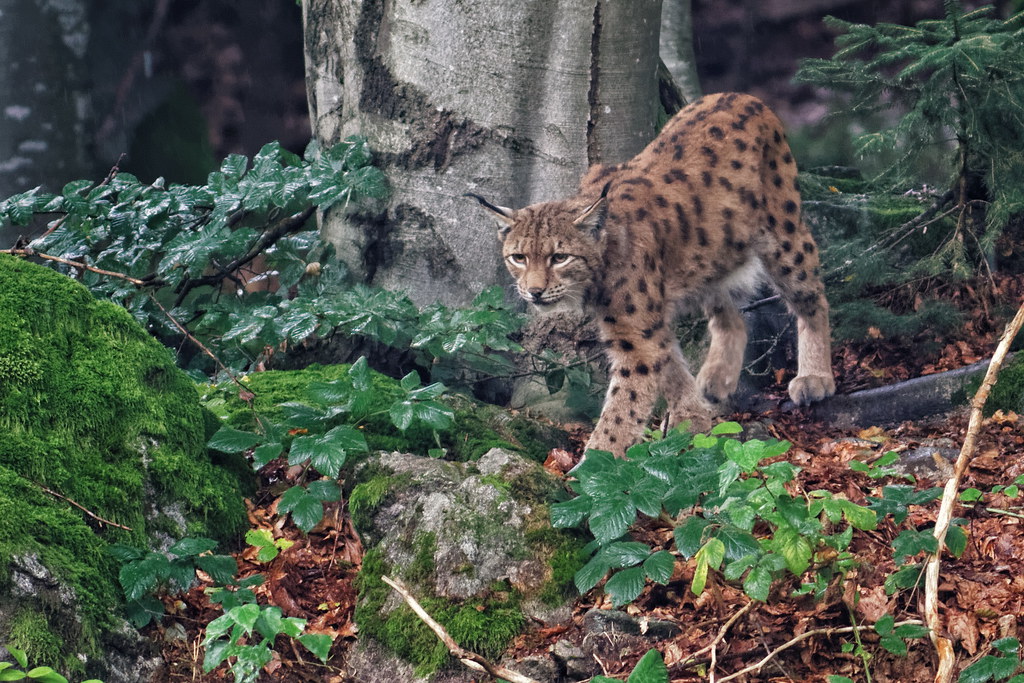 A Luchs (lynx) in the Bayerischer Wald! (Image by Thomas Gerhard at Flickr.com under license CC BY ND 2.0)

Like many other Nationalparks we discussed, the Bayerischer Wald has large forests, and is itself part of a larger forest that runs across the border to the Czech Republic to form the largest uncut area in Central Europe. There are also many interesting animals in the park, like the Luchs (lynx). Some highlights include the Baumwipfelpfad and the Duftender Feuerschwamm.

The “Baumturm” (tree tower) or “Baum-Ei” (tree egg), the highlight of the Baumwipfelpfad. There is a beautiful view from the top! (See the video below) (Image by High Contrast at Commons.wikimedia.org under license CC BY SA 3.0 DE)

Also called Baumkronenpfad (tree-top or canopy walkway), the Baumwipfelpfad in the park is one of the highlights. As the name suggests, it is a wooden walkway that runs from tree to tree, at high altitude. And it is a large one: with 1300 m (4300 ft), it is the longest Baumwipfelpfad in the world! It features a lot of information about the forest and its nature, its flora and fauna. It is definitely worth the view, and high up in the trees… that is quite a magical experience!

Another special thing, which you can also see in the video above from 4:58, is the Duftende Feuerschwamm (Phellinidium pouzarii). As Dr. Claus Bässler says in the video: Den [Duftenden Feuerschwamm] gibt es in Deutschlandweit nur hier, in der Mittelsteighütte, und es gibt weltweit maximal noch sechs Fundpunkte. (The Phellinidium pouzarii exists in Germany only here, in the Mittelsteighütte, and worldwide, there are still up to six places to find it.  He continues to explain that the Pilz (mushroom) is so rare because it requires a jungle-like forest to grow. Wir haben hier die Verantwortung, diesen Pilz zu erhalten. Wenn wir nicht aufpassen, stirbt dieser Pilz aus und ist für immer verloren. (We have a responsibility here to preserve the mushroom. If we are not careful, this mushroom will go extinct and is lost forever.

The Große Rachel, Große Falkenstein and the Lusen

Panorama of the Große Rachel, where the woods were attacked by the Borkenkäfer. The neighboring Lusen endured a similar fate. This is a great example of the concept of Nationalparks: let nature be nature. No measures were taken to fight the Borkenkäfer, no fallen trees were removed. Now, rare species came back and a new forests are growing. (Image by Horacio36 at Commons.wikimedia.org under license CC BY SA 3.0)

From these mountains, you have a great view over the surrounding landscape. In the winter, they provide the slopes necessary for challenging hikes. The area is also great for Langlaufen (cross-country skiing) and even Skifahren (skiing) in the winter!

Would you like to visit the Bayerischer Wald, German’s oldest Nationalpark?