German-English Cognates Posted by Constanze on Oct 25, 2017 in Language, Uncategorized

Guten Tag! In a recent post, Six Reasons To Learn German, I mentioned that German and English are from the same language family – the Indo-European family – which means both languages have taken words from Latin, Greek and French. Because of this, there are numerous cognates (words sharing a common source) that look and sound similar in both languages. This may be useful to remember on those days when German seems like the hardest language in the world to learn; these familiar words work as ‘helpers’ that help you understand a text, for instance, when you’ve no clue what the text is about! So what I’ve done is collected a load of German cognates to share with you here. Some are ‘perfect cognates’ (exactly the same) while others are ‘near cognates’ (similar). 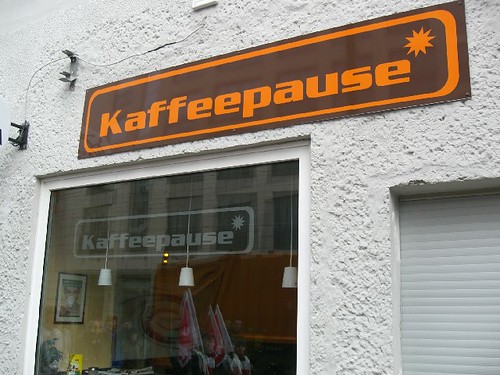 German coffee shop named ‘Kaffeepause’. You could probably guess what this place is without knowing any German at all. Photo by kefraya on flickr.com under a CC license (CC BY-ND 2.0)

Other cognates include all of the months of the year (Januar, Februar, März, April, Mai, Juni, Juli, August, September, Oktober, November, Dezember), some of the days of the week (Montag, Freitag, Sonntag), the planets & outer space (click here for the blog post), and some of the colours (braun, blau, grün, orange).

One thing to note, however, is that German contains many ‘false friends’ – words which you recognise as English, but which have a completely different meaning in German. One example is the word bald, which in English means to have no hair, but in German means soon. The best thing to do is to get to know these false friends so you don’t fall into their trap! Read more on them here, here and here.

Can you think of any more German/English cognates?

I hope your day is fantastisch! Bis bald.