How Germans Trick Or Treat Quite Differently Posted by Sten on Nov 14, 2019 in Culture, Holidays, Language, Music, Traditions

Last Sunday, I was having dinner with my brothers and sisters. Since winter nears, it was already pitch black outside – and suddenly the doorbell rang. Who’s that? My brother opened the Tür (door), young, high Stimmen (voices) began to sing, and we looked at each other in horror – we forgot the Süßigkeiten (candy)! What’s going on here? Let me tell you. 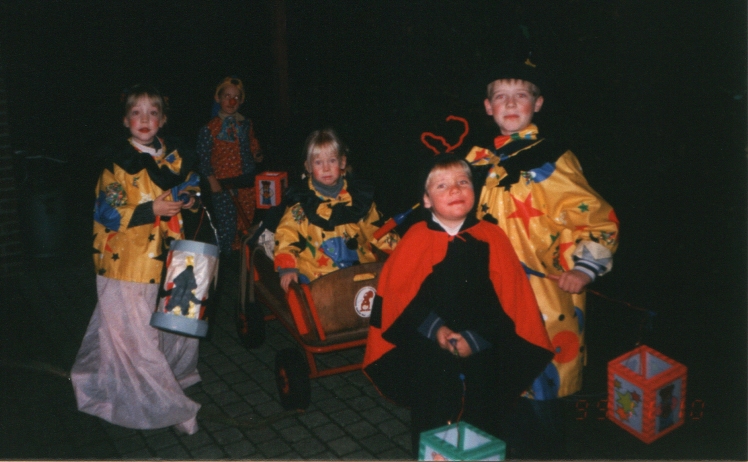 Me and some other kids participating in Laternelaufen in 1999. I’m in the front with the Marienkäferkostum (ladybug costume) (Image by author).

Every year on November 10, Kinder (children) go from Tür zu Tür (door to door) to show off their Laternen (lanterns) and singing skills. Sometimes these Laternen are made at the Schule (school), a Kirchengruppe (church group) or simply at home. The Laternen on the picture above, for example, we made with my dad.

Now, you can dress up, but that’s not mandatory. The Laterne really is all you need!

You leave in the evening, sometime after 5 pm, when it’s dark. Usually, you go in groups, and parents come along, particularly with smaller Kinder. You can literally go by every single house, even the Supermarkt (supermarket), and they’ll give you something sweet!

But you have to sing a song for that, more on that later.

Why do we celebrate this in the first place?

November 11 marks Sankt Martinstag (Saint Martin Day), a celebration in honor of Saint Martin. Martin was a römischer Soldat (Roman soldier) who helped a freezing Bettler (beggar) stay warm by cutting his Mantel (coat) in two and giving the Bettler a half. In his Traum, the Bettler appeared as Jesus, which convinced Martin to become a Christian.

On Sankt Martinstag, it is also üblich (common) to eat Martinsgans (Martin goose) – why? 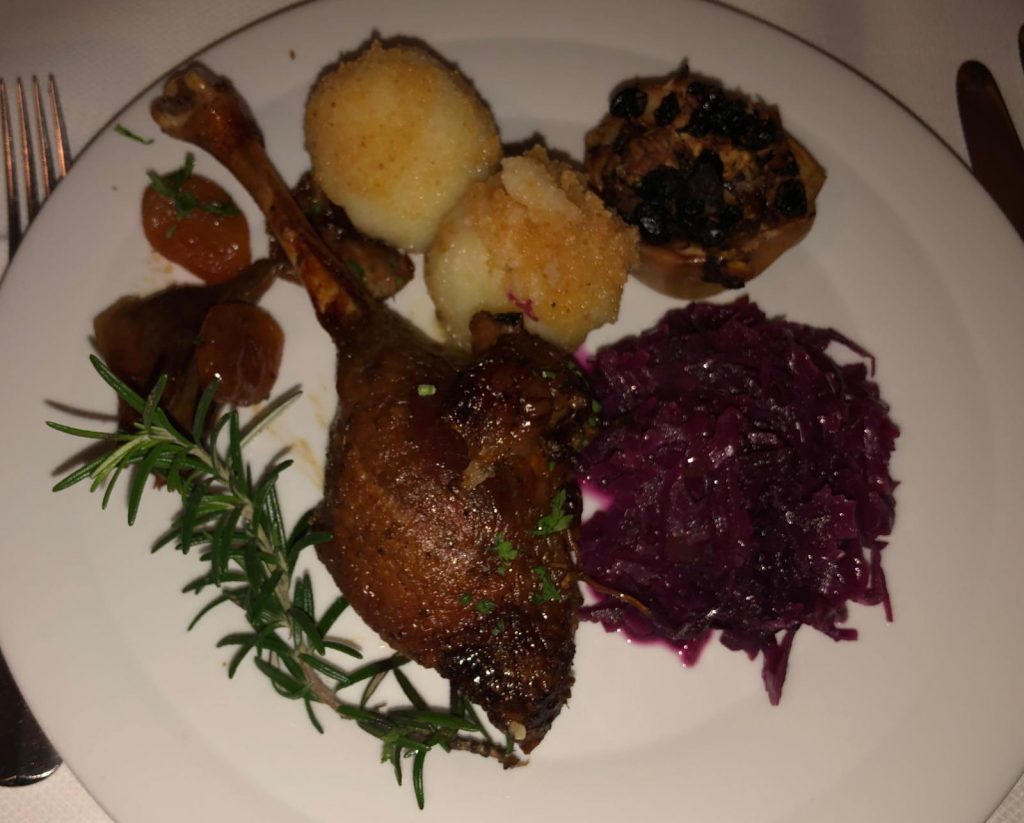 Martinsgans (Martin’s goose) with Klöße (potato dumplings) and Rotkohl (red cabbage) – does it get any more German than this? (Image by author)

Well, at a certain point, the citizens of the French city of Tours wanted him to become their Bischof (bishop) – but Martin was too bescheiden (modest) and did not see himself würdig (worthy) of the Amt (office). And so he hid – in a Gänsestall (goose coop).

But the Gänse (geese) cackled too loud and blew his hiding place. He was made Bischof anyway. So as Strafe (punishment), the Gänse were eaten. So the moral of the story is… “snitches get stitches”?

Perhaps to make this background less about Verrat (betrayal), there is another story to explain why the Martinsgans is eaten. Geese just waddled into the Kirche (church) when Martin was holding his Predigt (sermon), interrupting him. Again, the Todesstrafe (death sentence) awaited these unfortunate geese.

As Constanze pointed out before, nowadays it is celebrated across Germany, often without the religious background. I grew up protestant and did not even know that there was a religious background to this celebration. That’s also why this day (or the evening before) is not only known as Sankt Martin, but also as Laternenlaufen (lantern walking) or Laternentag (lantern day).

In some places, this is also accompanied by an Umzug (procession), like here in Austria:

The video above teaches you some Laternenlieder (lantern songs)!

I remember that once at the door, we would mostly sing the following verse only:

but please don’t burn my lantern!)

This makes a lot of sense – traditionally, the lanterns were made out of paper and a little candle was put inside – so it could literally catch fire!

These days, there are safer alternatives, like little battery-powered lights that hold your lantern and give it light. We even had some fancy ones that had little pulsing colored lights in the rod.

Do you celebrate Sankt Martin in your country? What do you think about this celebration vs. something like Halloween? Let me know in the comments below!