The Difference between Nikolaus, Santa Claus and the Christkind Posted by Larissa on Dec 14, 2015 in Culture, Traditions

St Nicholas comes from Greece (now part of Turkey) and lived in the third century. He donated Geschenke (presents) and food to the poor by throwing them through the window. He died on the 6th of December which is why the night of the 5th is a remembrance day for him. I wrote a post all about him last year, if you want to know more then you can find it here. 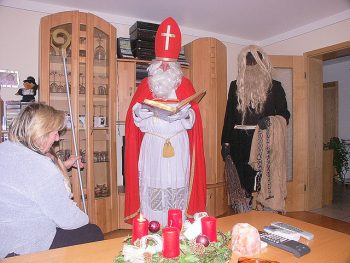 St Nicholas with the Krampus. Photo by labormikro on Flickr under CC BY-SA 2.0

His name originates from the Dutch word Sinterklaas and he is actually St Nicholas! During the Protestant reformation the Church banned St Nicholas’ day, as they didn’t want a catholic saint to be remembered. The pilgrims who still wanted to keep the tradition changed the day to the 25th so they could remember St Nicholas as well as the birth of Jesus.

St Nicholas got his new image from various Gedichte (poems) and drawings. One of the most famous poems is “A visit from St. Nicholas” by Clement Clarke Moore (also known as “The Night Before Christmas”). Here he describes St Nicholas as how we know him:

“His eyes—how they twinkled! his dimples, how merry!

His droll little mouth was drawn up like a bow,

And the beard on his chin was as white as the snow;”

The Christkind came from Martin Luther during the Protestant Reformation. The Christkind was created as the new gift bringer to eliminate St Nicholas. The christkind is a child like figure with blonde hair, meant to resemble Jesus as a child. My sister wrote a detailed post on the Christkind last year which you can find here.

I hope this post has cleared up any confusion! In short, St Nicholas was turned into Santa Claus, and the Christkind became the new gift giver to try and stop people remembering St Nicholas. Despite all that happened over the centuries each figure is still remembered every year.

I wish you all a merry Christmas!