What is Glühwein and where did it come from? Posted by Larissa on Dec 18, 2018 in Culture, Holidays, Traditions, Uncategorized

Every December the Christmas markets go up in Germany and people come together to drink Glühwein. But what exactly is it and how did it come to Germany?

Glühwein literally translates to “glow wine”. In English we know it as mulled wine. Although the drink is very popular in Germany, it’s origin does not come from Germany. The Romans invented mulled wine to save any extra wine they had that was going off. They added honey and spices to make it taste better. As they travelled across Europe, mulled wine was spread across the countries. In the middle ages the wine became popular and was even thought to be very healthy because of all the spices.

The oldest Glühwein in Germany is dated back to 1420! In Germany the typical recipe for Glühwein is red wine, sugar, cinnamon, cloves and an orange. If you want to cook up some for yourself then you can find the recipe here. You will also come across new types of Glühwein in the German christmas markets, such as: Heidelbeerglühwein (blueberry mulled wine), weisse Glühwein (white mulled wine – made with white wine), Glühwein mit Schuss (mulled wine with a shot of rum) and Kinderpunsch (children’s punch – unalcoholic hot juice, mainly for children but also adults). I have tried them all (strictly for research of course) but I find the traditional red Glühwein is still the best. 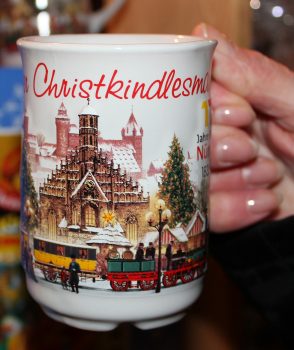 Glühwein is so popular not just because it is tasty but also because it is the perfect drink to have when it is cold and snowing outside. It warms you up from the inside out! Traditionally in Germany it is served in a cute mug. Not only is this more enviromentally friendly than paper or plastic cups but you can also keep your Pfand (deposit) and therefore keep the cup!

Have you ever tried Glühwein? Let me know in the comments section below.