Hinglish in Advertising Posted by Rachael on May 24, 2019 in Hindi Language

As you delve deeper into your Hindi studies (हिंदी की पढ़ाई/Hindi ki parhaai), you’ll notice that English (अँग्रेज़ी/angrezi) continues – for better or worse – to make extensive inroads into the Hindi language. This is true in casual conversation (बातचीत/baatcheet), especially amongst young, urban and educated people but also among the population as a whole. Even in rural areas where the spread of English and English-medium education is not quite as extensive, it is common to hear certain English words, although they have been adapted so thoroughly into the local language that people consider them to be indigenous words. For example, the word “प्रोग्राम” (program) which, in this case, means “a television program,” is in such widespread use that some people would argue with you if you told them it was an English word. Likewise, the word “पंचर” (puncture – meaning a “tire puncture” or “flat tire”) has been so thoroughly adapted into local languages (namely through a modification of its pronunciation or उच्चारण/uccharan) that many people would be surprised to learn that it is actually an English word.

The legacy of English in India is long and complicated (learn more about this in my more extensive blog about the history/इतिहास/itihaas of English in India here), but suffice it to say that the dissemination of English in India began in earnest with the arrival of British colonists and the gradual concentration of their power (सत्ता/sattaa), first in the hands of the East India company and subsequently in those of the British crown. As English began to be promoted over local and classical languages, such as Sanskrit and Arabic, in order to train a new class of Indian bureaucrats who could work more efficiently for the colonists, the spread of English and its status as an aspirational language of wealth and power became gradually entrenched in society (समाज/samaaj).

And, as our modern (आधुनिक/aadhunik) society has become more globalized and English has attained the status of a global lingua franca, it increasingly makes sense from a practical standpoint to learn English, not only to assume better jobs (नौकरी/naukri) in India but to take advantage of opportunities (मौका/maukaa, sing, मौके/mauke, plural) to work and study abroad. In India today, English has a complex and fraught status – it is a practical language that can afford one valuable opportunities but, at the same time, lovers of Hindi, Bengali, Tamil and India’s myriad other languages bemoan the fact that the incursion of English into native languages has often meant a vital loss of those languages’ lexical and grammatical richness and a deterioration of their value as fascinating and ever-changing vessels of culture, history and literature. For better or worse, this incursion of English into Hindi has already taken place, forming a pidgin popularly known as “Hinglish” (हिंग्लिश). And nowhere is Hinglish on more public display than in popular Hindi films and advertisements (विज्ञापन/vigyaapan). In this blog, we’ll look at a few examples of Hinglish in advertisements to get a feel for how this pidgin changes the lexical and grammatical structure of the average Hindi sentence. 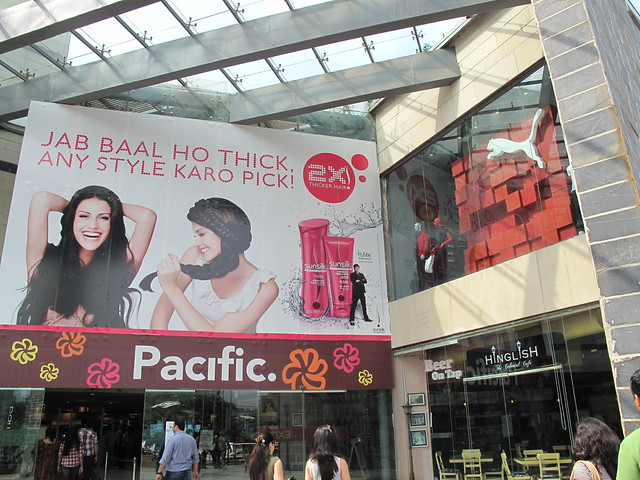 An example of “Hinglish” in a mall in New Delhi. Image by leesean on Flickr, licensed under CC BY-SA 2.0.

If you watch TV in India, you’ll notice that a lot of the advertisements – especially for beauty and personal care products – use a “healthy” amount of Hinglish. Part of the reasoning for this is that these brands are targeting a young, educated and urban audience. In addition, English is associated with those who are in tune with trends and upwardly mobile. Clearly, you could phrase this sentence easily in Hindi – “जब बाल हो घने, कोई (भी) बनत चुन लो” – but the phrase would not have the same melodic and rhyming impact and would fail to appeal to a demographic for whom English is a language of power and status.

You’ll also notice here that the goal of the advertisers is not just to load the sentence with English vocabulary, but indeed to change Hindi’s grammatical structure. Although this is essentially a Hindi sentence (in terms of vocabulary and grammar) with English words added to it, the advertisers take advantage of a common verbal structure in widespread use in Hinglish: attaching an English word (such as a verb or noun; in this case, “पिक/pick”) to the all-purpose Hindi verb करना/karnaa (to do). You’ll notice that this phenomenon of using करना as a vehicle for all sorts of Angrezi-fied compound verbs is extremely common in Hindi as the language becomes more and more influenced by English. Interestingly, next door to this advertisement, if you look closely enough, is a cafe called “Hinglish: The Colonial Cafe.” Although some would construe this as a clever play on the political and social ramifications of the admixture of Hindi and English, others may argue that it represents a troubling form of fetishization of British colonial rule over India. 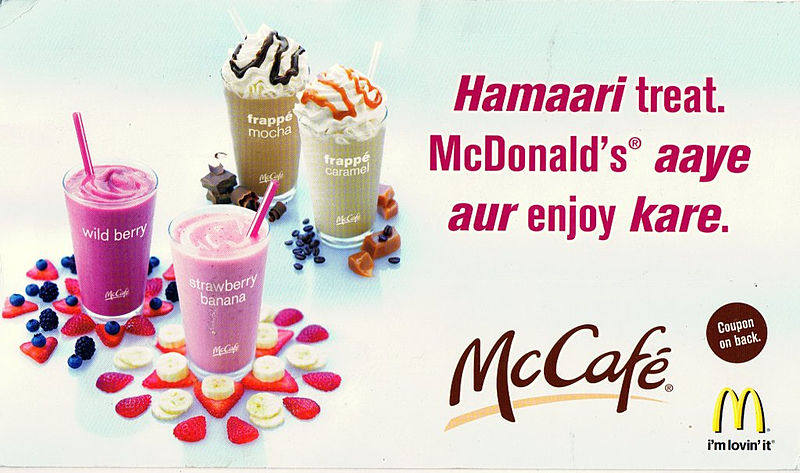 Again, in this ad we see a healthy amount of English vocabulary as well as the use of करना + an English word (enjoy/एंजॉय) to form a Hinglish compound verb, thus changing the grammar of this sentence as well as its vocabulary. Another aspect of this ad that is worth noting is its use of the Roman script rather than Devanagari. You’ll encounter this use of Roman very often in Hinglish ads as the assumption is that the target audience knows enough English to appreciate the ad in Roman. Seeing the ad in Devanagari, on the other hand, might send a mixed message to the viewer as English is clearly being privileged as a language of greater status and power, not only in terms of vocabulary and grammar, but even in the writing system being used in the advertisement. 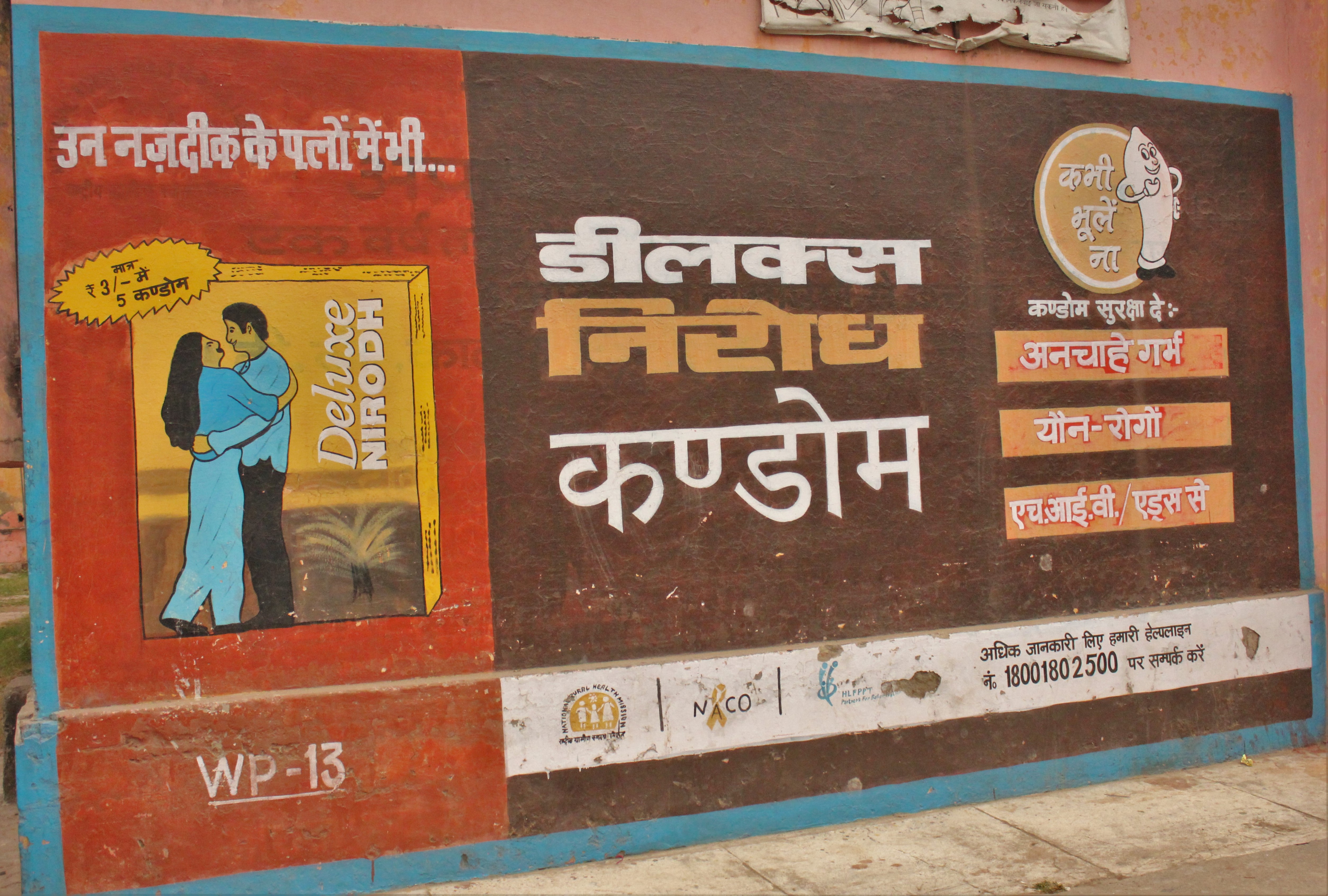 This ad is also interesting in that it is written almost entirely in Devanagari, which signals to the viewer that it is targeting a completely different audience than the ads above. Indeed, this picture was taken in Benaras, which is part of the “Hindi heartland” where Hindi is widely spoken and celebrated. Instead of writing the English word “deluxe” in Roman script, the advertisers have taken pains to transliterate it into Hindi:  डीलक्स, mimicking the altered pronunciation that this word takes on in an Indian context. Another interesting feature of this ad is that it is essentially providing its own subtitles – it uses the words “नीरोध” (protection, interference or preventative) and “कण्डोम” right after each other (note the use of Devanagari rather than Roman), which is a bit odd considering that they mean the same thing in this instance. But, when you consider that the advertiser is not assuming much knowledge of English on the part of the onlooker and wants to appeal to a broader swath of the population, this clever use of built-in subtitles makes sense. Lastly, the advertiser has taken pains to transliterate the English abbreviations for diseases into Hindi script, rather than attempting any wholesale Hindi translation.

If you’ve got the time, I encourage you to seek out more examples of Hinglish in advertising, film or any form of popular culture and analyze how the use of English vocabulary influences Hindi’s own lexicon and grammar. And perhaps you might ask yourself – what are the social and cultural implications of this influence?