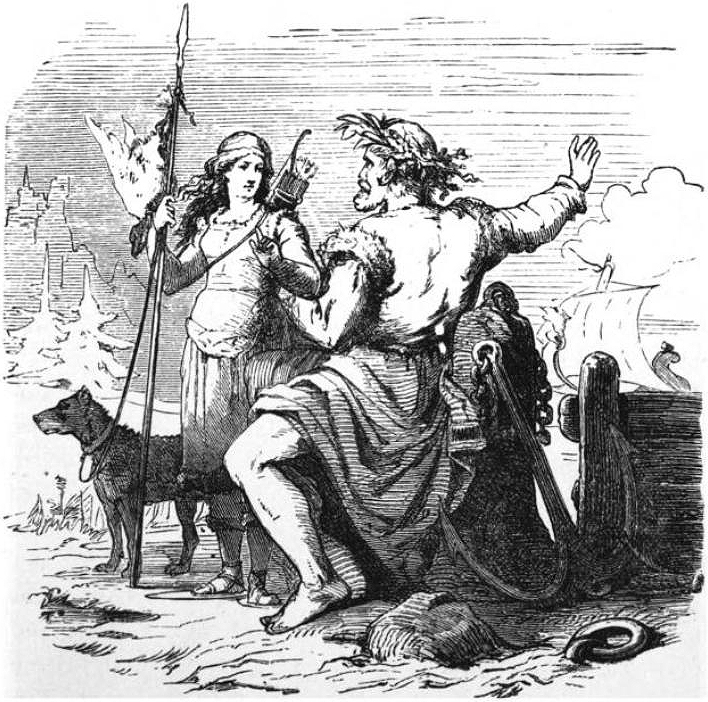 A new girl’s name has been accepted by the naming committee (link)! Although the word “new” there does not quite describe the name itself, it’s in fact so old it can be found in some of the oldest texts written in Iceland. Everyone knows the lady, she’s a key figure in Norse mythology… but up until now her name has been off limits for parents selecting a name for their baby girl.

It’s not because names of old gods, goddesses, jötunns, elves and dwarfs were somehow not usable. To name a few examples there’s no end to Þórs in Iceland, both male and female (Þór is a common part of a name, a girl’s name can literally be Þórdís, Thor-goddess!), and likewise Freyja and Baldur are accepted choices. The name Skaði is also not offensive in any way and it’s not only spelled in an acceptable manner, it declines perfectly in Icelandic – well, obviously, since it’s such an old name. So what was the reason it’s been banned until now? Just one: it declines like a masculine word.

Let’s first look at who Skaði was in Norse mythology: goddess of winters, mountains, skiing and bowhunting and also the daughter of jötunn Þjazi. Þjazi’s most notable deed was kidnapping Iðunn, a goddess of eternal youth, a slightly too ambitious attempt. It eventually lead to his death as the æsir, not immune to the ravages of time, decided they really wanted her back so they wouldn’t die of old age. Skaði, deeply hurt by the loss of her father, dressed up in full war gear and went to, ahem, discuss matters with æsir who were very quick to suggest negotiations to make up for the killing. Óðinn made stars out of her father’s eyes, Loki made her laugh (this was her own requirement since she believed the æsir would not be capable of doing it)(you can look this story up but as a warning, it has Loki behaving very Loki-ishly in it) and the gods as whole offered her a groom from among them. The catch was that Skaði had to select her groom by looking at their feet only. Selecting the most beautiful pair of feet Skaði was wedded to the sea god Njörðr.

The marriage was loving and happy but for one thing, the two had exactly opposite requirements for the place they wanted to live at, being gods of those places. They did their best to make things work and tried to reach a compromise by both trying to live at the other one’s home but alas, when Skaði lived at Njörðr’s place by the sea she constantly pined for the mountains. Likewise, Njörðr missed the sea badly when he tried to live in the mountains and that eventually lead to their divorce.

Skaði kept her connection to the æsir however and is regularly seen in stories involving them. She was even included in the incident that ended up with Loki being captured underground, tied to a rock with the guts of his own son and a huge snake above him dripping poison into his eyes. That snake was Skaði’s own, hand-planted addition to the punishment, perhaps a little extra to avenge the killing another ás she once had a hot crush for, Baldur. 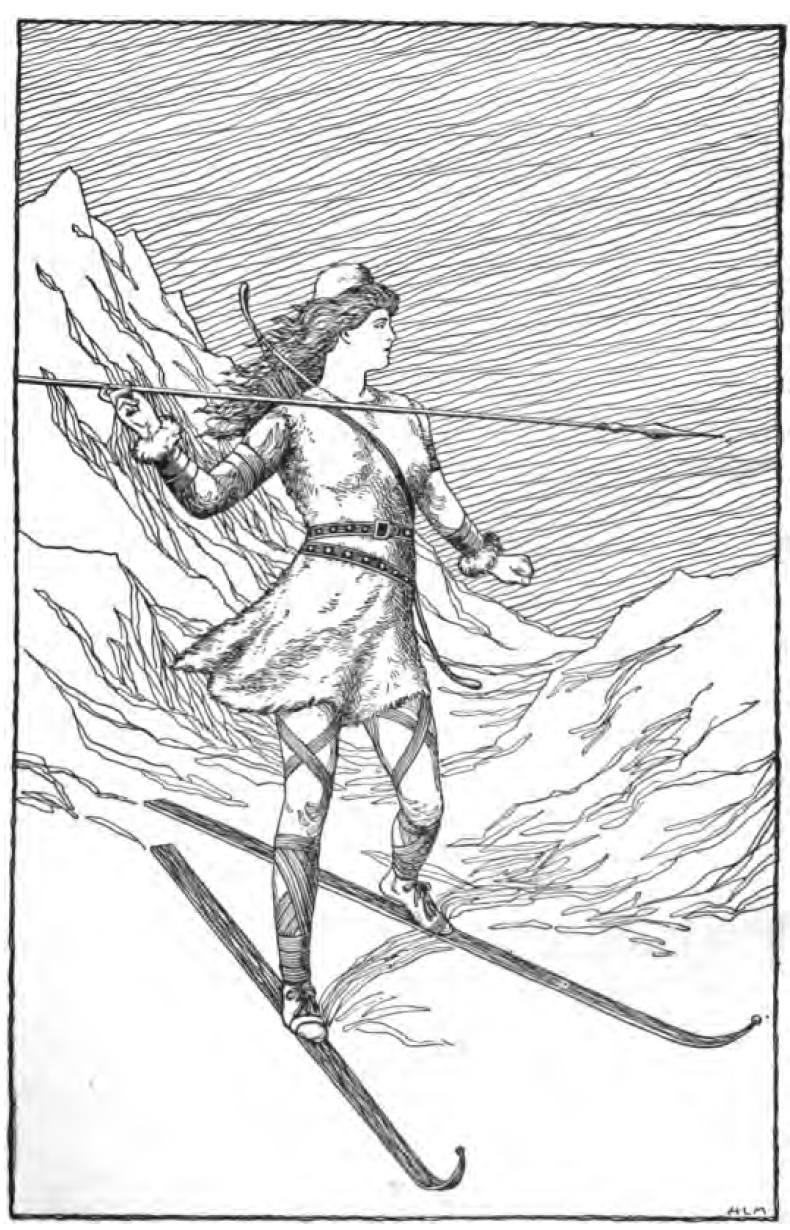 Skadi Hunting in the Mountains by H.L.M. from Wikimedia Commons.

What’s in a name

Independent, headstrong, sincere and loyal, Skaði is not at all a bad example for women. Chances are there would be more Skaðis already had the name declined like female words do, or if there had been a precedent of the name’s use. The naming committee doesn’t mind at all if someone wants to name their child Auður for example, and that name too declines in masculine. Similarly there’s the male name Sturla, that sounds grammatically feminine despite very obviously being a man’s name. See:

Besides Auður and Sturla, Blær is another example of a masculine declining female name that’s legally accepted… since not so long ago. Remember the story of the girl named Girl (link)? It took until she was 16 that she finally won the right to use her birth name Blær officially, but for a slightly different reason than why Skaði was banned. The exact problem wasn’t that Blær declines in masculine, it’s been a perfectly acceptable name for a boy. No, the real problem was that Blær was also a suitable name for a girl. As per Icelandic naming laws unisex names are illegal, Iceland does not allow names that don’t clearly point at the person’s gender. Times seem to be changing now though and hopefully the naming laws will eventually change enough to include unisex and gender neutral names… or at least names that are clearly female or male, but decline in the “wrong” gender because frankly, in my opinion banning those is beyond ridiculous.

Blog posts related to the topic

Find Your Icelandic Name! Everything you need to know of Icelandic naming laws.
Non-binary Pronouns in Icelandic – what if the person you’re talking to is not of a binary gender?
New Words for Icelandic – what do we call that gender in Icelandic?
When Women Are Men and Men Women – or how grammatical gender does not always refer to actual gender. 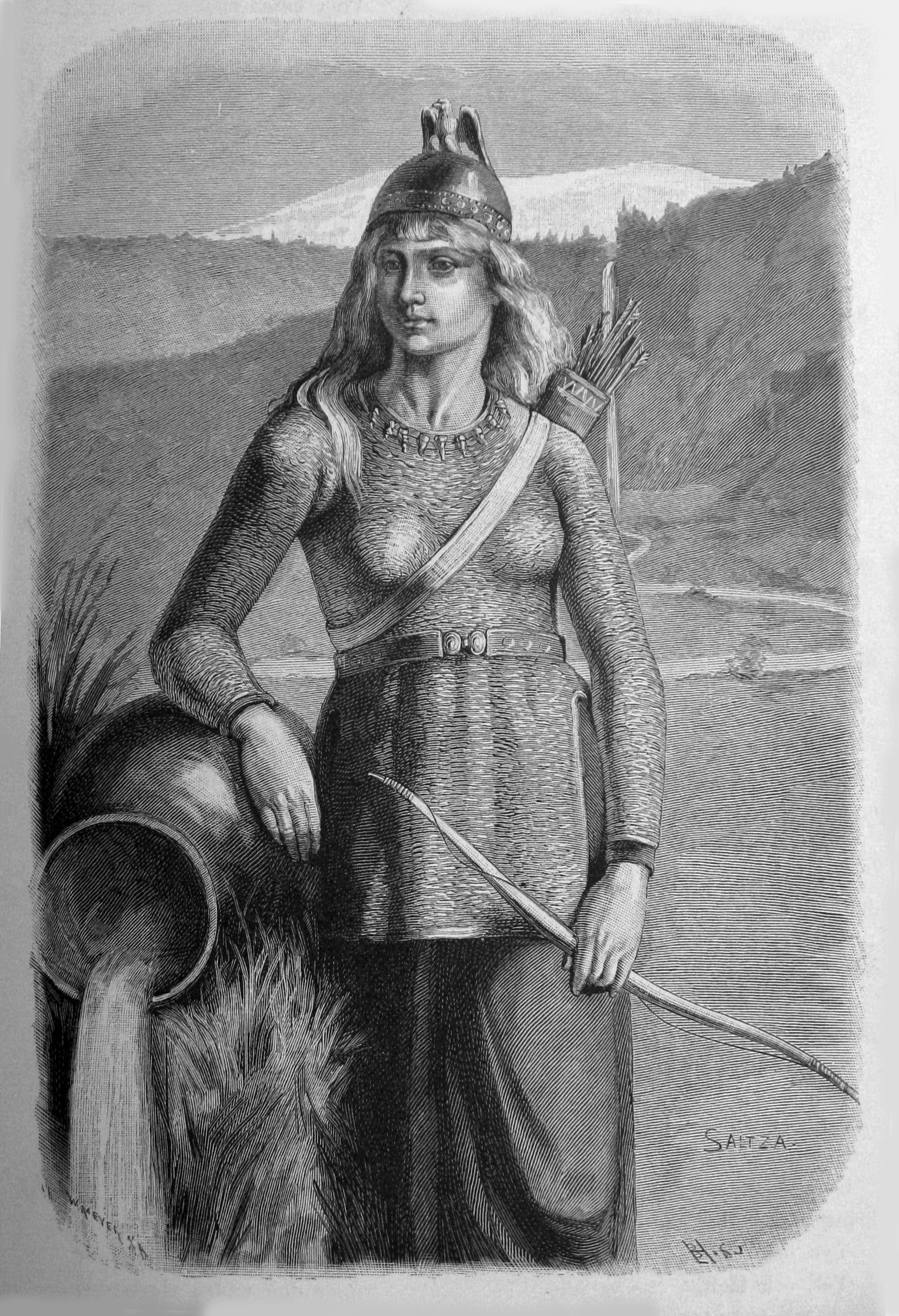 Skade by Saltza at Wikimedia Commons.