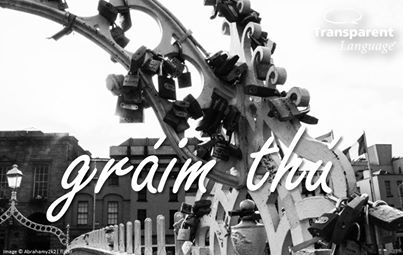 No, that’s not an overlooked duplication of words.  “Glas crochta” is a padlock (hmm, guess why that topic came up in today’s blog!) and “crochta” means “hung” or “hanging,” from the verb “croch” (hang).

First let’s discuss the word “glas,” since it’s a triple homonym in Irish.  One “glas” means “green.”   A second “glas,” our topic today, means “a lock.”  And a third, much less commonly used in my experience, is “glas” meaning “rivulet” or “stream.”  I guess I use this last “glas” about as often as I use the word “rivulet” in English.  I’ve seen it often enough, somewhere in with the “rocks and rills,” or maybe the “freshets,” and yes … Wordsworth to the rescue (“It was an April morning: fresh and clear / The Rivulet, [capitalized, no less!] delighting in its strength, / Ran with a young man’s speed; …).  But I rarely, if ever, really use “rivulet.”

Getting back to “glas” (a lock), we now modify the word to mean “padlock,” as opposed to other types, such as a “glas cip” (wooden-bolt lock on a door) or “glas gunna” (a gun-lock).   Since a padlock hangs from the item to be locked, it’s called a “glas crochta” [glahss KROKH-tuh].  A “love lock” would be “glas grá” and a “love padlock” would be “glas crochta grá.”  Alternatively, we could use “seirce” or “ceana” or “páirte” for “of love,”  but I like the “glas/grá” near-alliteration.

In preparing this blog, I actually looked into what the “pad-” part of “padlock” really signifies.  And lo and behold, the considered opinion of various lexicographers and etymologists is … inconclusive!  Several sources just leave it as “unknown.”  Wiktionary suggests several origins.   One is from “pad” (a gate, which must either be some dialect or obscure English, at any rate, I’ve never encountered this usage, as best I can remember).   Another specifies a gate opening to a path, the “path” possibly being called a “pad”.  And, in a completely different vein, the “pad” of a lock might come from a dialect version of the word “pannier.”  Etymologically speaking, I’m underwhelmed by the possibilities.

At any rate, it seems clear that whatever “pad” contributes to “padlock,” it’s completely different from the Irish modifier, “crochta.”  So let’s look a little further at that.  As a noun, “croch” can mean “gallows,” “cross” (which is also “cros” or “crois“), “hook”, and “hanger.”  As a verb, “croch” means “hang” and a variety of related words (hoist,  raise up, lift, and, regarding anchors, weigh, plus, in seeming contrast, regarding cards, throw down).  Prepositions often provide the final coup de poing for Irish verb phrases, changing the meaning seemingly drastically, so “Croch leat!” means “Clear off!” (literally “hang / lift with you,” maybe a reference to lifting your feet high and skedaddling).

As an adjective, “crochta” can mean “hung” or “hanging,” as noted above, and also “hanged” when serving as a past participle (aidiacht bhriathartha).  A few examples include:

As for the notorious idea of the “hanging judge,” that’s a “crochadóir breithimh,” almost the opposite structure grammatically of the English.  “Crochadóir” means “hangman” and “breithimh” means “of a judge,” or in a Celtic context, “of a brehon.”

It’s a bit intriguing that “crochta” can mean both “hung” and “hanging.”  But there’s also the phrase “ar crochadh” for “hanging,” for when something is in a hanging position.   A “hanging stair” for example is “staighre ar crochadh” but a “hanging door” is “comhla chrochta.”  Maidir le “comhla” vs. “doras,” remember that although we widely use “doras” for the whole ensemble (comhla, ursain, tairseach, srl.), “comhla” is really the “leaf” of the door.

The bridge you see in the  picture above is “Droichead na Leathphingine” (aka Droichead na Life aka Ha’penny Bridge aka The Liffey Bridge) in Dublin.  It’s one of many global “love lock” locations which have now become popular places for couples to place a lock and throw away the key (usually into a body of water) as a proclamation of their love for each other.  Sometimes that’s to the consternation of the civil engineers, etc., ach sin scéal eile.

By now you may have figured out that the title of this blog means “Have you hung your padlock yet?  As for the romance aspect of all this, let’s hope that all these love-locked relationships work out, and that no one is left “hanging.”  Especially all you “geanphearóidí” and “éanacha súirí“ (love-birds) out there this Valentine’s season (séasúr Vailintín).  SGF — Róislín

P.S. And by the way, I couldn’t resist adding that “hang-dog” looks in Irish aren’t “hang.”  They can be “caillte” (lost) as in “dreach caillte” (a lost look) or “snámhach” (sneaking) as in “gotha an tsnámhaí” (the gesture of the sneak).  So, btw (a dó!), a “snámhaí” is a “sneak” (or a creeper, crawler, or dawdler) but a “snámhóir” is a “swimmer.”  Except when in some dialect usages, a “snámhaí” could also be used for a “swimmer,” as per Foclóir Uí Dhónaill (All hail!)

P.P.S.  There’s another word for “padlock” in Irish which is “glas fraincín,” but I’ve yet to figure out the “fraincín” part, unless, by some slim chance, it has to do with “frainceáil” (“franking,” as in stamps).  Eolas ag duine ar bith?  Nothing I’ve looked at so far suggests an explanation of “fraincín” used with “glas.”  So “croch” seems to have provided a lot more ábhar machnaimh and thus, thereby hangs the above “scéal.”