An Uimhir Is Uaigní a Dhéanfaidh Tú Choíche (… the Loneliest Number …) Posted by róislín on Aug 28, 2011 in Irish Language 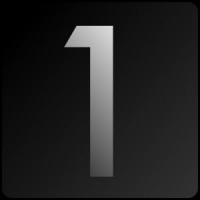 “An uimhir is uaigní a ‘dhéanfaidh’ tú choíche.”  Cén uimhir í sin?  Uimhir a haon, ar ndóigh, de réir Harry Nilsson, ar a laghad.  Speaking of the number “one,” this might be a good time to discuss the two forms of the number “one” in Irish: a haon and amháin.

Of all the numbers, the number one shows the greatest difference between the form used when actually counting an object (bó amháin) and when listing numbers in a series (a haon, a dó, a trí, srl.), the so-called “independent” usage.  The latter usage also applies to situations where one item out of a series is being specified (Bus a hAon, suíochán a haon) or when doing arithmetic (a haon agus a haon, sin a dó; a haon faoi a ceathair, sin a ceathair).

The word “amháin” works differently from most other numbers in that it follows the noun being counted:

That makes reasonable grammatical sense when we consider that “amháin” is considered an adjective in Irish.  In Irish, as you may recall, adjectives usually follow their noun (as is typical in Spanish, French, and occasional borrowings in English, like “attorneys general,” “knights errant,” and “courts martial”).

So we can have bó mhór, bó bheag, and bó mhaol ([boh weel] known as a “muley cow” in colloquial American English), and bó amháin (one cow).  “Amháin” fits the same slot in ord na bhfocal as the other aidiachtaí (mór, beag, maol).

The numbers above one, though, are considered “numerical adjectives” (as opposed to just plain old adjective), which puts them in a different position, literally.  The numerical adjectives come before the noun, as we’ve seen often enough, and from that vantage point they can do tricky things like cause lenition or eclipsis.  You can’t cause initial consonant mutation (like lenition or eclipsis) from behind the noun, so there’s no change to the noun when we’re just saying “capall amháin”!  Just for review, here are some samplaí of the numerical adjectives with lenition and eclipsis, as appropriate:

While a nice straightforward number like “trí” stays the same no matter where you put it, as in “trí bhus” (three buses) or “Bus a Trí” (bus number three), the number “one” does not.  When used “independently,” (i.e. as a maoluimhir), we’re really looking at a completely different word: a haon.  This used to be written as “a h-aon,” which IMHO made it clearer that the number part was really “aon” and the “a” was a numerical particle, causing “h-prefixing.

Some more examples of “a haon” are:

a haon a chlog, one o’clock

cuid a haon, part one

nuacht a haon, news at one (o’clock)

One of the gray areas for this topic would be names of royalty (not a huge topic of conversation in my experience in Irish, but worth noting nevertheless) and names of numbered streets or avenues.  The latter also don’t come up often in Irish discussion, except in the American context, since there are so few numbered streets in Ireland. “Bhí mé ag siúl ar Fifth Avenue” could be heard often enough stateside, but one could also say “ar Ascaill a Cúig,” which literally means “Avenue Five.”  The fact that the word “ascaill” also really does mean “armpit” in Irish (like Latin “axilla”) may not jive too well with “Lucht Fifth Avenue,” were they to get this particular skinny, but most of said “lucht” will probably be none the wiser.  Unless, of course, they’re reading “Irish Blog.”  As for how “ascaill” came to mean both “armpit” and “avenue,” sin ábhar blag eile.

As for royalty, the use of numbers is well established.  The “maoluimhir” is used, not the ordinal number (adjective form) as English does:

Eilís a hAon, Elizabeth the First (even though the Irish word for “first” is “an chéad”)

Séarlas a hAon, Charles the First

das (btw), an cuimhin leat ceoltóirí eile, seachas Nilsson é féin agus Johnny Farnham, a chan an t-amhrán “One Is The Loneliest Number That You’ll Ever Do”?.  Here’s their name in Irish — can you translate it back into English (freagra thíos): Oíche Thrí Dhiongó:  Oíche Thrí Mhadra.  Or, of course, you could make a case for using “madadh” and leniting it to “mhadadh” or “gadhar,” leniting it to “ghadhar.”  If I understand the band name origin correctly, the reference is really to diongónna, we should probably be saying “Oíche Thrí Dhiongó,” but who am I to change rock ‘n’ roll history and nomenclature?