Bígí Ciúin! Ba é an cat é! Or Should That Be “Ba Iad Na Deich gCat Dhubha Iad”? Posted by róislín on Oct 15, 2012 in Irish Language 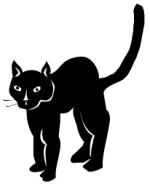 "Mí-eadha!" a deir an cat dubh

Just when you may have thought there couldn’t possibly be any more rialacha for comhaireamh in Irish, there is at least one more point to be addressed — the use of adjectives with the nouns being counted (e.g. two big dogs, five small cats).

Given the season, let’s count black cats.  As you’ll see, the word “black” changes substantially from when you’re simply saying “a black cat” (cat dubh).  After the numbers, the adjective gets the plural ending (usually “-a” or “-e”), and if it starts with a lenitable consonant, it gets lenited (d becoming dh).  This is true even though the noun itself (“cat“) has stayed singular.  So “dubh” will change to “dhubha.”  Unlike most European languages, gender as such doesn’t come into play here.  The basic pattern is: number + noun, singular, lenited or eclipsed as necessary + adjective, with lenition and plural ending.  Or in a nutshell, “dhá chat dhubha,” as opposed to “cat dubh” (a black cat) or “na cait dhubha” (the black cats).

Some adjectives, of course, like “uaine,” do not begin with a consonant, so can’t be lenited.  And some adjectives, of course, like “uaine” and other “a3” category adjectives (“fada,” mar shampla), don’t have a plural ending (because they already end in a vowel).  So “uaine” wouldn’t change in any of these phrases: cat uaine, cait uaine, dhá chat uaine.  Of course, you’re less likely to talk about “cait uaine” than about “cait dhubha,” because “uaine” means “green,” usually referring to man-made objects.  So a “cat uaine” would probably be a toy cat, déanta as pluis nó as plaisteach, or some such material.

cat dubh amháin [kaht duv uh-WAW-in], one black cat (no changes yet to “cat” or “black” when there’s still just one)

Here are two full paragraphs of pronunciation tips for “dhá chat dhubha“!  Two voiced velar fricatives and one voiceless one coming up!  “γaw khaht γUV-uh].  Mionrud faoin gcomhartha “γ” (gamma) sin thíos, plus a link to more info on pronouncing this “dh” sound.  Bottom line, the “d” itself is not pronounced, and it’s not at all like the “dh-” in “Dharma,” whether you give it the full Sanskrit treatment or the relaxed American approach, the latter most likely being the same “d” used, for example, in “darn” (as in “darning socks,” a more-or-less lost art, by the way–but I still have “ceap dearnála mo sheanmháthar“).  My guess is that most Americans discussing “Dharma and Greg” or Kerouac’s “Dharma Bums” probably resorted to an English-based “d” sound.  But I’d love to be proven wrong about that.

As for the “ch,” the voiceless velar fricative, we’ve been through it before in early blogs sa tsraith seo, but once again, it’s like the “ch” in “Chutzpah,” German “Buch,” Welsh “bach,” Hebrew, Arabic, and no doubt a lán teangacha eile.  In other words, not like the “ch” in “child” or French “chez” or “chat” (suimiúil, though, isn’t it, how similar lenited Irish “chat” and the French “chat” look?)

And now, ar ais go dtí an comhaireamh!  And the good news?  The above notes about the voiced and voiceless velar fricatives will serve you for the rest of our counting spree!

Of course, the Gilbert and Sullivan quote used in the title of this blog (in English, originally) actually referred to a cat o’ nine tails, which is Irish would be “lasc na naoi gcraobh” (lit. whip of the nine branches), which would definitely be a mouthful to count in Irish.  But not so bad really (naoi lasc na naoi gcraobh).  Say that deich n-uaire (10 times) chomh tapaidh agus is féidir leat!

Nóta faoin gcomhartha “gamma”: I can’t actually make it upper case here, to match the use of upper-case for stressed syllables, because that would be a different Greek letter.  And if I just make the “γ” extra large, it would skew the spacing.  Normally these IPA symbols aren’t used in conjunction with an English-based pronunciation guide, so normally there’s no issue whatsoever.  But there’s no clear-cut way to represent the sound of standard Irish “dhá” in Roman letters (aka the “voiced velar fricative”), so I have to resort to IPA.  Hmmm, I should check–I wonder if there’s a voiced velar fricative sa teanga Tliongáinise.  Eolas agaibh, a Threkies?  So maybe some of you have practiced the sound there.  Or sa teanga Eabhraise (but only Yemenite Hebrew, or so Wikipedia tells me).  Or sa teanga Araibise.  Agus Seapáinis, Navachóis, Ollainnis, Portaingéilis (canúintí áirithe) agus roinnt teangacha eile.