Cáisc, Cháisc, Chásca, Cásca et al. – Which One When? Posted by róislín on Apr 8, 2012 in Irish Language

After seeing so many Easter phrases, you might start to wonder why there are so many different forms of the same word.  Well, there’s the practical answer and the theoretical answer. 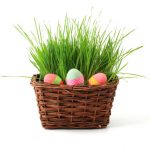 Let’s start with the practical answer.  For “Easter” in Irish we have the subject form (An Cháisc, lenited because it’s a feminine noun) and the possessive form (Cásca or na Cásca), plus we have two possible plurals (Cáisceanna, Cáscaí, the former being more standard today).  The trickiest part to figure out, in most cases, is whether “Cásca” itself gets lenited, as often happens.  That depends on whether the noun in front of it is masculine or feminine, singular or plural, and if plural, what the plural ending is.  So you don’t just have to know the grammatical gender of “An Cháisc” (feminine, ar ndóigh) but you also have to know the gender of any other nouns in your Easter phrase.

Let’s try some exercises, with phrases taken mostly from previous blogs in this series.  Which form of the word for “Easter” would you use in the following expressions?  Freagraí agus aistriúcháin thíos:

The theoretical-type answer to the original question (why so many forms?) is that Irish is an “inflected” language, more so than English but less so than, say, Latin or Russian.  That means  that words in Irish typically have a lot more forms, especially endings, than they do in English.  In English we have possessive forms (‘s) and singular and plural (almost always “-s” or “-es”).  In Irish, on the other hand, there are several different plural endings and a number of irregular plurals.  Some of the typical plural endings are: -(a)í, -a, -(e)anna, -(e)acha, -ta, -te, with the forms in parentheses allowing for adjustments for vowel harmony (addressed in earlier blogs, if you want a review: https://blogs.transparent.com/irish/tearmai-an-tseasuir-nollaig-agus-hanukkah-and-some-vowel-harmony-to-boot/).  Other Irish nouns form their plurals by internal vowel change (fear/fir for “man”/”men”, the latter also using internal vowel change), and some are just idiosyncratic (bean/mná for “woman”/”women”).

And then there’s gender, as with nouns in other European languages but not most English nouns (with rare exceptions, like “ship” as “she”).  This creates even more variety, because Irish typically uses with lenition with feminine nouns (like An Cháisc), but no lenition for masculine nouns till you get to an tuiseal ginideach, which is definitely ábhar blag eile.  Since lenition affects the first letter of the word, we see often see Irish words changing at the beginning for lenition and at the end for plural, past tense, etc., and sometimes in the middle as well (“internal vowel change”).

Perhaps you’re wondering if “Cáisc,” as such, is ever actually used?  The answer is well, casta (complicated).  I’d say “rarely” for most traditional phrases, with “Cáisc na nGiúdach” (Passover) being a major exception (if you’re surprised at that connection, check out the note below).  The word “Cáisc” changes substantially for the tuiseal ginideach (to “Cásca”), so “Cáisc,” as such, doesn’t show up in possessive phrases. “Cáisc” on its own is not the form most traditionally used.  Having said that, I’ve noticed in recent years that the phrase “Cáisc Shona duit!” has become widely used.  Traditionally, the phrase for “Happy Easter” was “Beannachtaí na Cásca ort!” (lit. the blessings of Easter on you!), and this is still widely used.  From the Google search viewpoint, the “beannachtaí” phrase is currently solidly in the lead (20,300 amas vs. 4,830 amas for “Cáisc Shona”) but the latter seems to be more and more popular, especially on the 100-ways-to-say-Happy-Easter-type sites.

Regarding eclipsis, the other main initial sound change in Irish, in theory there could be forms like “gCáisc” and “gCásca,” but in practice, they’re very rare.  Eclipsis would be a little more likely with the plural form, for example, if one were saying, as we did in a previous blog “stale chocolate Easter rabbits of Easters past” (coiníní seacláide Cásca stálaithe na gCáisceanna thart) from https://blogs.transparent.com/irish/diochlaontai-aris/ (24 Aibreán 2011).  But, as you might imagine, that example is not exactly your everyday expression (most chocolate rabbits don’t last long enough to become stale) and “Easter” in the plural eclipsed form isn’t very commonly used.

As usual, this is just the tip of the iceberg for all the aspects of creating Irish phrases and sentences, but at least it is a start.  The issues involved include grammatical gender (masculine, feminine), number (singular, plural), and case (an tuiseal ginideach), all of which are factors in some other European languages.  But Irish, like other Celtic languages, adds the unique factor of initial consonant mutation.  In Irish, there are two types of such mutation, lenition and, though not much for Easter itself, eclipsis, resulting in, well, lots of variety, lots of endings, lots of beginnings, and lots of choices to make as you speak Irish.  The exercises above were designed to illustrate some of those principles.

Nóta faoin bhfocal “Cáisc” agus “Pascha”: “Cáisc” is ultimately derived from Hebrew “Pesach,” which also gives us Latin “Pascha” and all the related words, like Pascua, Pâques, Pasg, etc.  The alternation of the letters “c” and “p” may seem surprising but it’s actually quite systematic (think “cos,” foot, and Latin, “pēs, pedis,” foot).  There are even more such connections between Irish and Welsh (“ceann,” head, and Welsh, “pen,” head).  It’s a much bigger ábhar than we have space for here, but perhaps sa todhchaí!