Cén focal Gaeilge a thagann ón tSínis?  Bhuel, OK, English is a significant intermediary, but it is interesting to consider how certain words have become gaelicized.   Especially if they start out as something like “ kôe-chiap ” or “ kê-chiap ” (literally, brine of pickled fish). 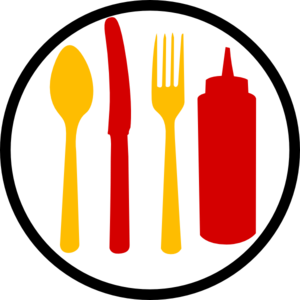 As you may have guessed from looking at those transliterations from Chinese (Hokkien), and perhaps also from the clue (leid) in this blog’s title, that we eat it on “brocairí teo,” the answer is “citseap.”

Just in time for séasúr na mbeárbaiciúnna, which is rapidly approaching.  So let’s backtrack a bit and see how this word appeared, first in English, then, from the scanty data available, in Irish.

There are many accounts of the origin of the word “ketchup” (aka “catsup”) in English.  The nutshell version will do for our purposes.

The word “ketchup” had entered the English language by about 1750.  It seems unclear as to whether the word came from Chinese or Malay-Indonesian (“kecap“),  but the Chinese originally meant means “fish sauce,” and, yes, it was fermented.   Similar, I presume, to the ancient Romans’ garum.  I’ve read various descriptions of the Malay-Indonesian, “kecap,” but it seems that was “soy sauce,” not “fish sauce.”  Feedback from any speakers of these languages would certainly be welcome.

The original recipes for ketchup did not call for tomatoes; that apparently started around 1800.  Early Western recipes survive for “walnut ketchup,” attested in a “household book” of recipes from Jane Austen’s family, and “mushroom ketchup.”   But apparently these sauces, which involved fermentation, were an attempt to imitate the Chinese fermented fish sauce, introduced to the West via sailors.  I guess fermentation creates a similar taste no matter what the basis is, otherwise I’d be saying “Iasc?” “Gallchnónna?” “Muisiriúin?”  Tasting similar?  Uh, beyond this blog!

There’s plenty to read about the history of ketchup in the West and about the word “ketchup” in English (cúpla nasc thíos).  But our main interest here, is, of course, the Irish.

So we have the word “citseap.”

Although I can’t pinpoint it specifically, it seems to have entered the Irish language sometime between the 1930s and the 1950s.  In an admittedly brief search, I don’t see it in any pre-1950s sources, but it does appear by 1959 in Tomás de Bhaldraithe’s English-Irish Dictionary.

Here are the forms of the word “citseap“:

an citseap, the ketchup; pronounced almost like the English but with more of a “kit” sound rather than a “ketch” sound and more of an “ap” sound than an “up” sound, i.e. “KIT-shap” not “KETCH-up.

Generally speaking, the word “citseap” isn’t considered to have a plural, but if one were really needed, in would probably also be “citsip,” since the word is 1st-declension and masculine.  I wouldn’t normally use “ketchups”  much in English either, only perhaps to discuss types (These ketchups are tomato-based and those aren’t, perhaps referring to the Filipino banana ketchup).

The word “citseap” can also be lenited and eclipsed, as in:

And finally, how would we use this word in a typical sentence?

Ar mhaith leat citseap ar do bhrocaire te?  Would you like ketchup on your hot dog?

And maybe you’ve had this conversation before:

A: Aaargh!  Níl an citseap ag teacht amach as an mbuidéal seo.

A: Aaargh!  The ketchup is not coming out of this bottle.

A: Why there?  I usually hit the bottom of the bottle in cases like this.

B: I don’t know but it works.  Something to do with physics, I suppose.