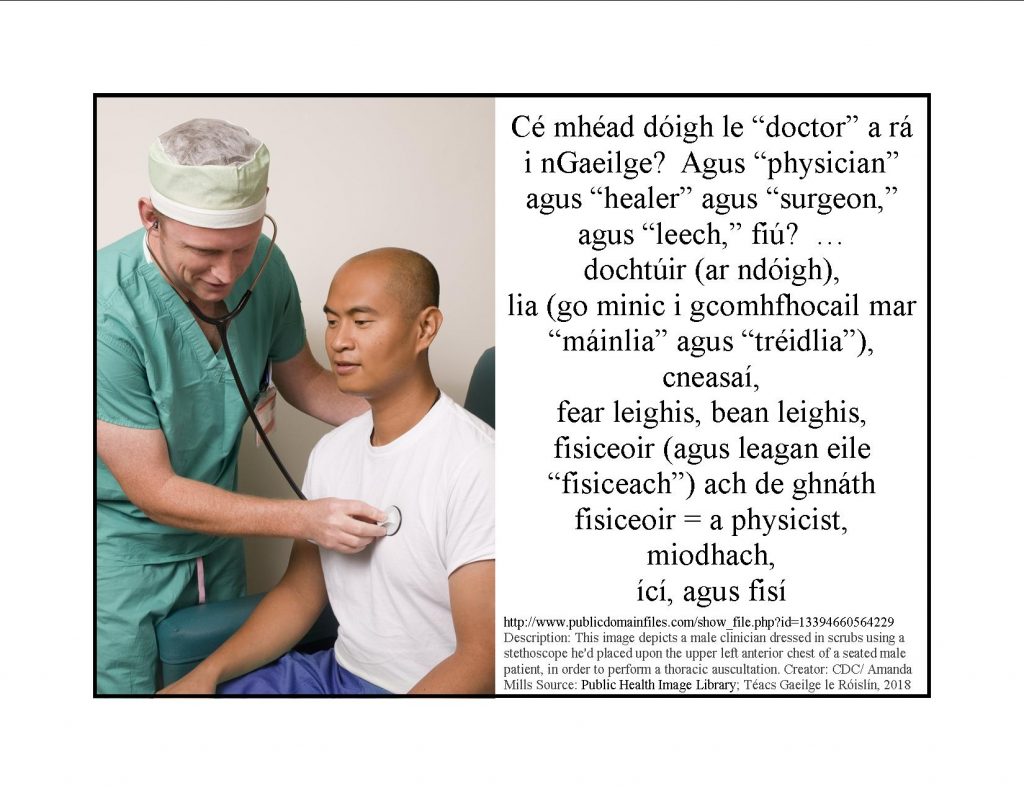 Doctor … healer … physician? What’s the difference in Irish? And are some of the terms overlapping?

Basics first.   Certainly the word most people learn first for “doctor” in Irish is “dochtúir,” and here are its basic forms:

1.. An dochtúir, the doctor, the physician

Mála an dochtúra, the bag of the doctor/physician

But further investigation shows us a variety of interesting words for healer, physician, curer, and related ideas. Here are some additional options, plus a few comments as to how often they are actually used in modern, conversational Irish. They’re listed roughly in order of usage, according to my own experience.

4.. Fisiceoir, pl: fisiceoirí (variation: fisiceach, pl. fisicigh), physician. This word can also mean a “physicist”.  I haven’t really heard or seen this used very much in Irish, not nearly as often as we might say “physician” as opposed to “doctor” in English. Sin mo thaithí féin, ar aon chaoi.

5.. Cneasaí, pl: cneasaithe, healer, variation: cneasaitheoir; also means “a close companion” or “spouse,” although by far the more common word for “spouse” is “céile” (as in “fear céile” and “bean chéile”). Cneasaí and cneasaitheoir are based on “cneas,” an alternate word for “skin” (the much more common one is “craiceann”). Apparently the healing sense comes from the idea of creating skin, as in scar formation. The verbs “cneasaigh” and “forchneasaigh” mean “heal” or, tapping into our Latin roots, “cicatrize.” And that leads us to the interesting word “colm” (not “colm” a dove), meaning “a scar” or “a cicatrice.” In case you don’t use “cicatrice” or “cicatrize” very often, you’re not alone. Google’s “use over time” graph shows about 1870 to 1890 as the peak usage for this word.

Why learn some of these more obscure words? Among other reasons, they may show up in proverbs (seanfhocail), and as we all know, “Ní féidir seanfhocal a shárú” (It isn’t possible to surpass a proverb).   Here’s a seanfhocal with “cneasaí”: Is maith an cneasaí an aimsir.” An dtuigeann tú é? Aistriúchán thíos.

There’s also an interesting use of this word in an Irish translation of a Bahá’i text (nasc thíos), one of the few other usages for “cneasaí” that pops up online: cneasaí d’anró uile (a healer of every hardship).

Here are a few more that I’ve scarcely ever seen in a natural context, but they are interesting:

7.. ící, pl. ícithe, healer, physician, related to words like “íceach” (healing, curative, as seen in a recent blogpost in this series, nasc thíos), íoc (to heal, to cure, healing, curing), íoclann (dispensary), and “íocshláinte” (healing balm, restorer of health). This is also related to the surname Ó hÍcí (Hickey), so if there are any Hickeys here who are related to the traditional family of healers, please do let us know.

8,, fisí, pl: fisithe, physician, but primarily “seer” or “person of knowledge,” based on “fios,” one of several Irish words for “knowledge. Not to be confused with “físí,” a visionary or dreamer, based on “fís,” a vision.

9.. leigheasóir, pl: leigheasóirí, healer, curer, based on “leigheas,” medicine, medical treatment, cure, remedy. Not very widely used, in my experience, but a nice tie-in to “leigheas” itself.

10.. Another one I haven’t really heard in everyday use: tuata ag déanamh leighis, a layman or ordinary person practicing cures

So, we start out with one idea, and next thing you know, we’ve got at least 9 other related vocabulary words. And I haven’t even touched upon really traditional folk healers, who might be referred to as a “bean feasa” or a “fear feasa,” people who know charms and spells, and possibly home remedies.   And then there’s “seaman, pl. seamain” (a shaman, shamans), and that’s an Irish word, not the English word “seaman” as in “sailor,” which would be “mairnéalach” in Irish.  So there’s lots more to look at still, including many more compounds based on “lia.” SGF – Róislín

Is maith an cneasaí an aimsir. Time is a good healer, with “aimsir,” not “am” for “time.” Other uses of “aimsir” as “time” include “in aimsir na bhFiann” and “curtha in aimsir” (put into service, i.e. hired out for a period of time, like the domestic servants in the Downton Abbey realm). More frequently, of course, “aimsir” means “weather.”

https://bahai-faith.manvell.org.uk/gaelic/briathran_falaichte/phw21-40.htm. Both Irish and Scottish Gaelic translations are given. The text is “The Hidden Words of Bahá’u’lláh – Part 2, From the Persian. And, in case anyone is wondering, the Scottish Gaelic version uses “ ìocshlaint do thrioblaidean uile”. And here’s a note on the translation: “The Irish Gaelic translation of The Hidden Words of Bahá’u’lláh, the Founder of the Bahá’í Faith, is by Professor Seosamh Watson, and is reproduced here by kind permission of the National Spiritual Assembly of the Bahá’ís of the Republic of Ireland and Professor Watson.” (https://bahai-faith.manvell.org.uk/gaelic/briathran_falaichte/treorachadh.htm)