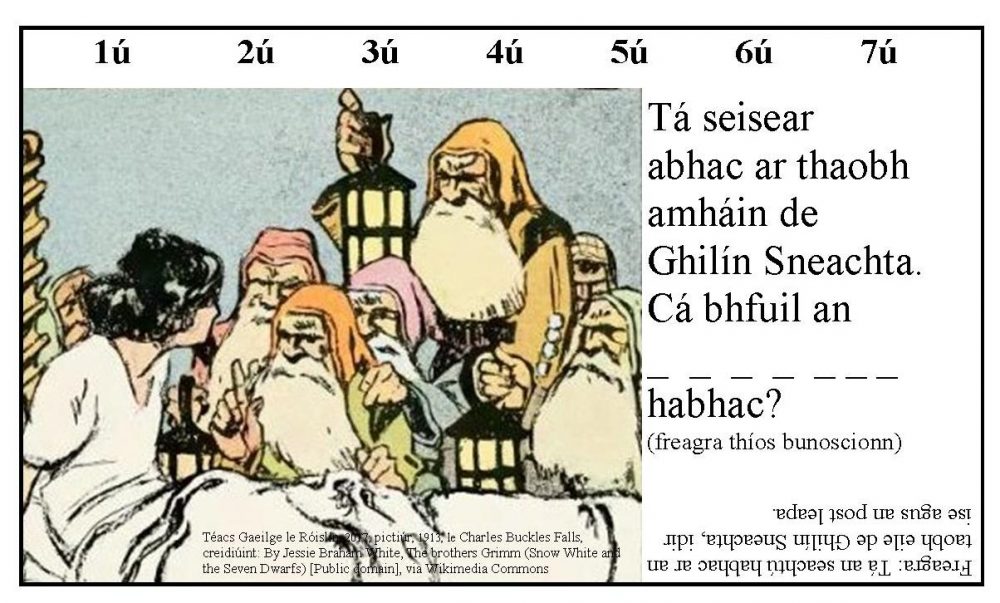 Since we’ve been on an “orduimhreacha” roll recently (nasc thíos), I thought it would be fun to try some more examples, this time embedded in Irish versions of famous (or not-so-famous) film titles.  So I’ll provide the Irish phrase for context, and see if you can fill in the blank, using the ordinal number with the right suffix.  Not that hard since there are only three patterns for making ordinal numbers in Irish.  And one of them is the “-ú” ending we’ve seen before.  The other two I’m leaving up to you to remember!

For simplicity’s sake, I’m focusing on “first” to “tenth” here.  Eventually maybe I’ll look for some examples of film titles with numbers like “eighty-sixth” or “thirty-ninth.”

BTW, for any teachers using this, it’s pretty self-explanatory, and the ordinal numbers from 1 to 10 are usually taught pretty early on in any course sequence.  So I’m not teaching them here as such, but they can be found in the answer key, of course.  The date of the film, given in parentheses, may help trigger one’s memory of the film.  The blanks are all the same length; they don’t indicate the length of the word.  NB: Mar leid, tá cás amháin de shéimhiú/urú ann agus cás amháin den litir “t” mar réimír.

BTW2, I’m not presenting the ordinals in numerical sequence.  That would take away some of the “dúshlán“!  The film titles are in roughly alphabetical order.

BTW3, as far as I know, none of these have official Irish-language titles.  If they do exist, there could be slight variations, since there are often multiple choices for translations.

A few “orduimhreacha” were used in the blogpost before that, on dates of eclipses, which is what triggered the August 13 post: Discussing The Moon and Eclipses in Irish: Foirmeacha an Fhocail ‘Gealach’ agus Lánuruithe i 2018 agus i 2019 Posted by róislín on Aug 8, 2017 in Irish Language

Freagraí, and btw, they’re sorted numerically here, to help reinforce the sequence from “first” to “tenth.”

a) In English, “Star Trek: First Contact” has no “the” — Irish has a tendency to use the definite article a little more often than English

b) Sharknado: The Second One. OK, I basically made up ” *Siorcnado,” but it is based on the Irish for “shark” (siorc), unless, that is, you’re talking about a few types of sharks that are not called “siorc” in Irish (liamháin gréine, basking shark, agus sionnach mara, thresher shark aka sea fox; tá dornán eile ann, b’fhéidir ábhar blag eile?  Teideal, b’fhéidir, “When is a Shark not a ‘Siorc’?)