While potatoes are a popular food year round and worldwide, they are especially popular at this time of year in the U.S. with Lá Altaithe approaching.   This is one of few times, at least i mo thaithí féin, when more than one kind of práta is typically served with a meal. 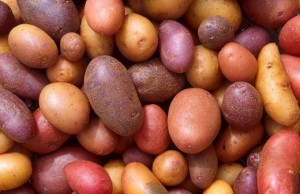 In Ireland and with Irish-American friends I’ve had many meals where two or even three potato dishes were served as a matter of course.  But this is not typically true in general “American” cuisine, whatever exactly that is.

For Lá Altaithe many American families will have both prátaí (potatoes) and prátaí milse (sweet potatoes) or perhaps ionaim (yams).  After reading a lot recently about both sweet potatoes and yams, I remain confused about which is which.  I thought I had it sorted out, that what is often called “sweet potato” is a “yam” and orange in color, and that actual sweet potatoes are a pale yellow inside, and, in my experience, not as widely eaten.  But from what I’ve just read, not even what I know of as a yam is actually a yam, and I’m told they’re not sold much in the US, except in ethnic markets.  So I’m just going to rest with the Irish terms, as given above: prátaí milse (sweet potatoes) and ionaim (yams).  I’ll let the tomhaltóir decide which ainm to apply to which glasra.

Sweet potatoes (or yams) are often served “candied” or mashed with a marshmallow topping.  Checking the various Irish dictionaries for “candied,” all I find is “criostalaithe,” but, fad m’eolais, that wouldn’t describe “candied sweet potatoes.”  “Criostalaithe” also means “crystallized” and would describe various food which are a bit crunchy, like sinséar criostalaithe and sailchuacha criostalaithe, or at least solidly crystallized and chewy, like craiceann criostalaithe (candied peel, as used in cístí torthaí).   With “candied sweet potatoes,”  the candied aspect is more of an “anlann” (sauce), which is mostly made with the following ingredients: im nó margairín, siúcra rua (donn), cainéal, noitmig.  Sometimes the prátaí milse are mashed with the anlann blended in, the leamhacháin are sprinkled on top and the dish is baked until the marshmallows have a golden crust.  In my opinion, the dish is an-bhlasta but also an-mhilis.  It makes a very attractive addition to a Thanksgiving table since the orangey-brown color matches the autumn/harvest color scheme that is typical of maisiúcháin Lá Altaithe.

As for na gnáthphrátaí (prátaí bána), there are so many ways these can be prepared that it would take several blogs to cover them.  But we can at least mention the basics.  At a typical Thanksgiving dinner, the potatoes are often served as “brúitín” (mashed potatoes) or “rósta le lus mín” (roasted with dill).

And how about all the different forms of the word “práta,” including, for the sake of thoroughness, direct address, as if one were speaking to a potato (why not?)?  If we can have óideanna to “síothla Gréagacha” and to “lúchair,” cén fáth nach mbeadh óid do phráta againn?

There are several dialect variations of the word for “potato,” namely “fata,” “préata” [PRAY-tuh], “preáta” [PRAW-tuh], and “buntáta.”  But for this blog, we’ll just concentrate on the standard, “práta.”  Here are its various forms:

A phráta! (O potato!, the “O!” is maybe a little extra poetic, but why not, since we’re talking potential ode here)

Don’t forget the “flapped” Irish “r” in these words, similar to a mini-trill, so the initial consonants of the “fraw” and “braw” sounds here are not exactly like the English words “fraught” or “brawny,” although the vowel sounds are quite similar.

And finally, what’s the title of this blog all about?

Those words are all taken from the popular Irish saying, “Bheadh na fataí nite, bruite, agus ite ag an gConnachtach sula mbeidís ráite ag an Muimhneach” (The Connachtman would have the potatoes, here “fataí,” washed, cooked and eaten before the Munsterman would be finished saying the word).  It’s especially fun to say because “nite,” “bruite,” and “ite” all sound so similar.  Ní nach ionadh because they are all rangabhálacha caite (past participles, aka aidiachtaí briathartha, verbal adjectives), formed from relatively similar-sounding verbs, “nigh,” “bruith,” and “ith.”  Hmm, tá an blag seo ag cur ocrais orm!  SGF (slán go fataí?) – Róislín 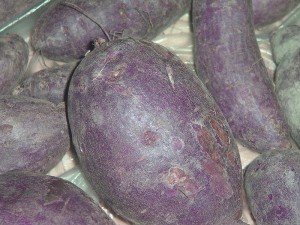