Seamra vs. Seamróga: Which Plant Goes with St. Patrick’s Day? Posted by róislín on Mar 17, 2014 in Irish Language 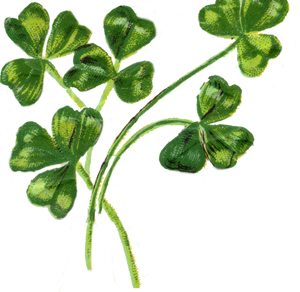 An tseamair nó an tseamróg?  There’s lots of discussion online and in print about what plant is actually meant by the term “shamrock.”  This blog isn’t going to attempt to solve that riddle, but we will look at the related vocabulary for “clover” in general and for “shamrock” in particular.

“Seamróg” is the Irish for “shamrock.”  It’s a diminutive of the word “seamair,” which means “clover.”

Since we mostly talk about “seamróga” for Lá ‘le Pádraig, we’ll start with that:

an tseamróg [un TCHAM-rohgg], the shamrock [note that the “s” becomes silent after the prefixed “t”]

na seamróige, of the shamrock

seamróg, of shamrocks (looks the same as the basic form for “a shamrock,” but, as you can see, it translates differently here)

na seamróg, of the shamrocks

And here are a couple of sample sentences:

Cén dath atá ar an tseamróg seo?  Tá dath glas uirthi.  That would be for a “gnáthsheamróg” (an ordinary shamrock).

Cén dath atá ar na seamróga eile?  Is féidir le seamróga a bheith buí, dearg, corcairdhearg, nó corcra.  One plant sometimes considered to be a shamrock is called “Black Medick,” but from what I’ve seen in pictures, it doesn’t look particularly “dubh” to me.

A shamrock is basically a type of clover, so now let’s look at the word for “clover” in Irish.

And here’s where the word starts to get interesting:

na seimre, of the clover

The plural is not quite what we might expect either.  Instead of simply adding an ending, we drop a syllable and then add the ending “-a.”  Or we might think of it simply as dropping the “i” and reversing the remaining “a” and “r.”  At any rate, the plural is:

seamra, translatable as either “clover” or “clovers” in English, depending on context.  In a general reference, we could say “a field of clover.”  But, especially when discussing different types, we could have a phrase like  “Clovers: Species and Varieties,” the title of an online article by Penn State’s College of Agricultural Science (nasc thíos).  If there’s anyone who should know the ins and outs of the use of the plural of “clover,” it would be an “eolaí talmhaíochta,” so I’ll take their word for it.

Another slight change to show possession, or more likely, attribute or characteristic, at any rate, “an tuiseal ginideach” (the genitive case), to use the formal term.

Here are some sample phrases:

Príosún Chnoc (na) Seimre, Cloverhill Prison.  Note: the “na” (“of the”) is in parentheses because I’ve seen both usages, with “na” and without “na.”

Seamra: Speicis agus Cineálacha (my translation of the title of the above-mentioned Penn State Extension article)

I haven’t actually found a lot of references online using “na seamar” (of the clover/s), but here’s one embedded in a hybrid English-Irish phrase, from a rather brutal period in Irish history:

John (or Shane) na Seamar Burke, aka “John of the Shamrocks” Burke: Note that in the name of this 16th-century personage, “na seamar” (of the clovers) is usually translated as “of the shamrocks.”  C’est la vie and so much for meticulous differentiations.

And then there’s the adjective form “seamrach,” as in:

And that’s in contrast to the adjective “seamrógach,” as in:

púiceanna tae seamrógacha, shamrock-covered tea cosies (or “cozies” if you prefer; it occurs to me that this is probably the first time I’ve used “tea cosy / tea cozy” in the plural, at least in writing!)

Bhuel, sin é don tseamróg agus don tseamair sa bhlag seo.  To answer the title question for this blog, both, really.  Shamrock and clover, over and over!  An bhfuil do cheannsa fliuchta agat fós?  And that’s not a reference to soaking your “head” (ceann) but to your shamrock / clover.  In other words, “Ar ól tú do Phota Pádraig fós?”  What’s that “St. Patrick’s Pot”?  Bhuel, the beverage goes by two names in Irish, “fuisce” or “uisce beatha,” and on Lá Fhéile Pádraig, it’s garnished with a real shamrock, which quickly gets “drowned,” after which it can be eaten.  That could be the subject of yet another blog, sa todhchaí.  SGF, or should I say, *BNFPO, an “acrainm” which may be “gearrshaolach” but “tráthúil,” at least for today. — Róislín

And for a bit more on shamrocks and shamrock-related words, https://blogs.transparent.com/irish/an-tseamrog-the-shamrock/ (3 Márta 2012)