What’s Your New Year’s Resolution (and How to Say It in Irish)? Posted by róislín on Dec 31, 2018 in Irish Language 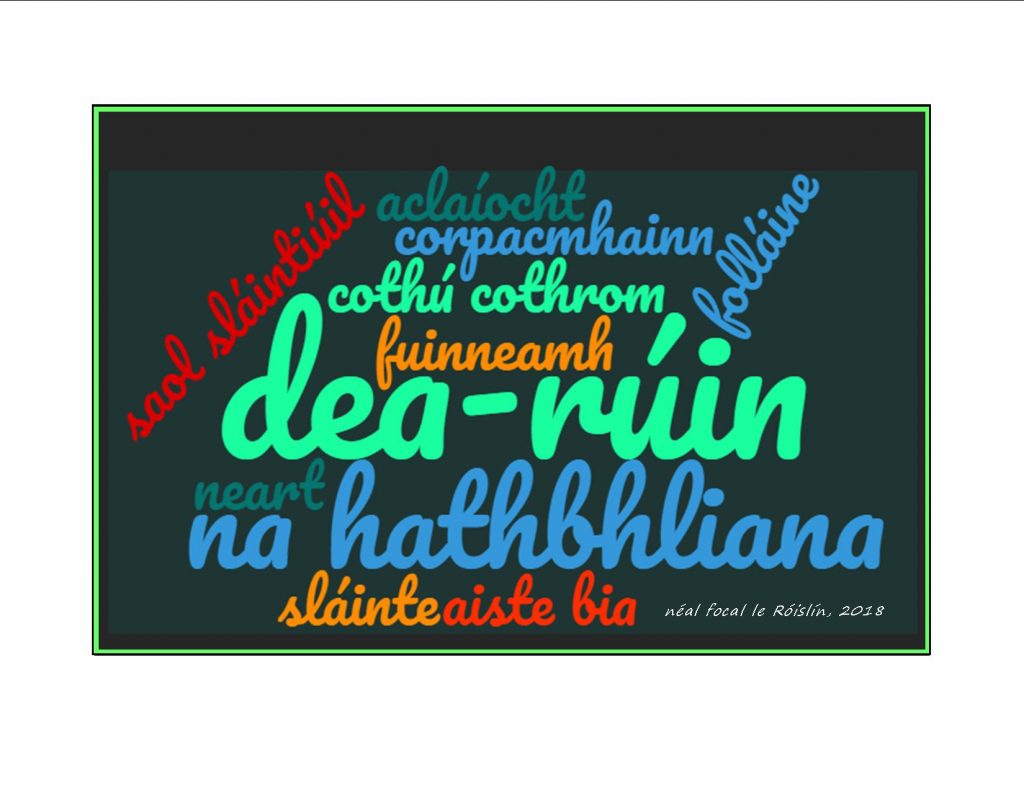 ‘Sea, an t-am sin den bhliain arís, aimsir na ndea-rún don bhliain nua.  In the word cloud (néal focal) above we see some common topics for “dea-rúin na hAthbhliana,” many of which have to do with health (sláinte).  How many of them do you recognize?

Here they are again, with a few pronunciation tips.  Can you match them up with the English?  Freagraí thíos.

4)) fuinneamh [tip: the n’s are also like the “n” of  “canyon” and the final ‘-mh” is usually pronounced like a “v.”  The initial “f” is very broad, as in the Irish “faoi”–in other words, it’s more like the French “fois” than a typical English “f.”  It’s also the same sound as in Myles na gCopaleen’s immortal quote “Phwat is yer nam?” to which, as you may recall, every child was supposed to answer “Jams O’Donnell.”  But more  on Myles’s masterpiece , An Béal Bocht, (The Poor Mouth) will have to wait for another blogpost.  Anyway, the pronunciation is like “FwIN-yuv.”]

7)) folláine [tip: this word has three syllables, with the final “-e” pronounced. albeit unstressed]

8)) cothú cothrom [tip: both “t’s” are lenited, so only the “h” is pronounced, not the “t”; note the nice, if coincidental, alliteration]

And here are a few more phrases, not in the graphic above (since they’re a little bit “rófhada” for a typical “néal focal“).  I give them here as infinitives; note that for the negative ones, we’re literally saying something like “without to be binge-drinking,” etc., not literally using a word like “not.”  Translations are also given below.

4)) stamina fuinneamh; I’ve also seen “teacht aniar” (lit. “coming from the west” for this but I do find it to be a bit cryptic for this application — any thoughts, anyone?

7)) wellness folláine; this word is related to the adjective “folláin,” as in the well-known expression “chomh folláin le breac,” as healthy as a trout

11)) not to binge-eat sweets: gan craos a dhéanamh ar mhilseáin (lit. “to be without doing gullet/maw/gluttony on sweets”)

12)) not to binge-drink: gan a bheith ag dul ar bhabhtaí óil (lit. “to be without going on bouts of drinking”)

13)) not to binge-drink: gan ól trom a dhéanamh (lit. “to be without doing heavy drinking”)

BTW, here are some previous blogs (iarbhlaganna) on New Year’s topics, which might be of interest:

Five New Year’s Resolutions a Leprechaun Would Make (and How to Say Them in Irish) Posted by róislín on Jan 10, 2013 in Irish Language