How to say “Merry Christmas” and “Happy New Year” in Irish AND Five Examples of Lenition (Séimhiú), to boot Posted by róislín on Dec 24, 2018 in Irish Language 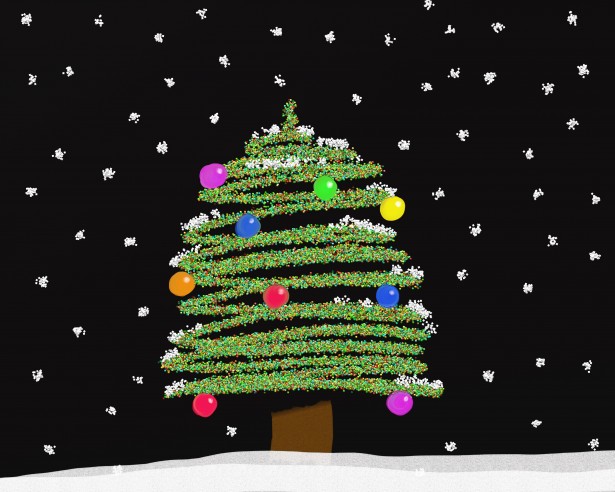 Around this time of year, we often see the phrases “Nollaig Shona” and “Athbhliain faoi shéan agus faoi mhaise duit.”  Today’s blogpost will look at how to pronounce these phrases and at the reasons why words like “sona” and “bliain” change to “shona” and “bhliain.”  This change of the first letter is called “lenition” (séimhiú, in Irish).

The pronunciation of “Nollaig” is fairly predictable.  Just keep in mind that the “-ai-” combination is really just a short “i” sound (that is, it’s not like English “drain” or “train” or like the Irish “maith” or “aithne.”  The final syllable sounds more or less like “-ig” or “-ick.”

For “shona,” the main thing is the “s” is silent, so the initial sound is just “h,” like “honey.”  The “o” is short (as in Irish “pota” or “lom“).  And the Irish word “shona” is not remotely connected to the English word “Shona” (SHOW-nuh), which refers to the language and tribe of the Shona people of Zimbabwe and Mozambique.  In case you’re wondering what the Irish actually is for the Shona language and for a Shona tribesperson, it’s Seoinis and Seoineach.  That’s just what one would expect, given the long “o” sound.  Not that that’s our primary concern here, but it is worth noting that “Seoinis” is one of the teangacha Bantúcha, a language family that has about 350 millions speakers, close to the same number of native English speakers in the world.

The main thing to remember is that our word for the Christmas greeting is “sona” in its basic form and it changes to “shona” when it follows the word for Christmas.

Athbhliain faoi shéan agus faoi mhaise duit.  The t, the b, the s, the m, and the d are all either silent or mutated.  The practical effect of these processes is that the words are not pronounced the way an English speaker would expect.  Not by a long shot.  But before you think this is totally bizarre, remember some of our more unusual English words like “ptarmigan,” “mnemonic,” “ptomaine,” and “psyche,” none of which are pronounced the way the spelling would suggest.  Five Irish pronunciation points follow:

b)) ~bhliain: the “bh” is like English “v,” giving us the sound “vlee,” which virtually never occurs at the beginning of an English word — the closest I can come would be words like “Vlad,” “Vladimir,” “Vladivostok,” and , for those in the US, “Vlasic Pickles.” So we say “VLEE-in.” (the root word is “bliain,” year).

And why all these silent letters and/or changes?   Here’s a quick summary:

sona: this adjective changes to “shona” because it follows a feminine noun.  Similarly, “bean mhaith” and “cearc dhonn.”

ath– : this prefix inherently ends in “th” so it’s not a matter of “t” changing to “th.” However, the “t” of “th” is always silent when it occurs in the middle or at the end of a word (e.g. Baile Átha Cliath, orthu, fúthu, maith, go maith)

bliain: “bliain” changes to “bhliain” because it follows the prefix “ath-“.  Many prefixes routinely cause lenition (séimhiú or “softening”) in Irish: seanfhear, roc-cheol, róthe.

séan, maise: “séan” changes to “shéan” and “maise” changes to “mhaise” for the same reason–they follow the word “faoi” (about, under), which routinely causes lenition (faoi Mháire, faoi dheireadh, srl.)

So there you have it, two seasonal phrases, with pronunciation notes and a brief explanation of why the words change at the beginning.  Of course, Irish words constantly change at the beginning, unlike English, or, indeed, unlike most of the world’s languages.  But this feature is shared by all the Celtic languages and everyone learning a “teanga Cheilteach” has to get used to the process.  A few other examples include the Welsh phrase “yng Nghymru” (in Wales), for “yn” + “Cymru,” and the Scottish Gaelic phrase “anns an Ghàidhlig” (in Gaelic), for “anns” + “an” + “Gàidhlig.”  The good news is that it eventually does become second nature, or, as one might say in Irish, it becomes something you can do “gan mhachnamh” (without thought or reflection) or “faoi mar a bheifeá á dhéanamh riamh” (as if you had always been doing it, or more literally, as if you would ever be at its doing).  SGF — Róislín