In light of this year is a bit different in the world of sports, let us take a look at Ancient Roman Gladiator ads. These ads in a time with no television or newspaper was possible through billboard status or graffiti. This post will be highlighting some graffiti inscriptions that showcase fans adoring different gladiators. In order to provide some background to some basic gladiator roles, I have included a basic description of the following.

A graffito from Pompeii that shows musicians, the emperor, and a fight between a murmillō and a secūtor.
Graffito mit Dipinti aus Pompeji (CIL IV 10237). Public Domain. The above graffiti comes from Pompeii and advertises a munus in the nearby town of Nola. The image shows a Thracian with small shield (right) fighting a secutor, the usual pairing for these gladiators. The text says:”At Nola there will be a munus of Marcus Cominius Heres for four days. Princeps of the Neronian ludus fought 13, 10 wins; Hilarius of the Neronian ludus fought 14, 12 victories, Creunus fought 7, 5 wins.”

The word gladiator meaning “swordsman”, from the word gladius “sword.” This is interesting because not all gladiators use a sword. Also, gladiators were often slaves with a few minor exceptions. The following are types of gladiators: 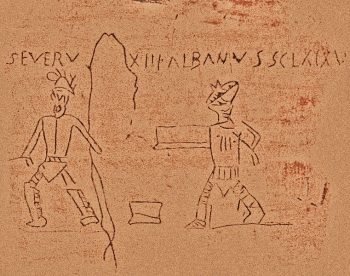 A graffito from Pompeii dating to the 1st c. CE indicates the outcome of a match between gladiators Severus and Albanus (Image via Wikimedia under CC-BY-SA 3.0 license; author Mediatus).

In Cumae, twenty pairs of gladiators and their replacements will fight in October kalends, the day before and the day before the October nones. There will be crucified people, a hunt, in tents. Curiculus, who writes, greets Lucceius.

Celadus the Thracier makes the girls moan! (C.I.L. IV, 4397; in the barracks of the gladiators)

So, to learn more about Gladiator Graffiti inscriptions click here.

Furthermore, next month we will be taking a look at another type of graffiti and how it is similar to social media and texting.