Note: This blog post is a companion to Unit XVI of our Introduction to Latin Vocabulary course. You can learn more about the course here.

The Romans did not believe the gods were kind, just, or interested in forgiveness. To them, the gods were incredibly powerful, and volatile, and therefore extremely dangerous. To do something that displeased the gods, on purpose or not, was to risk your life. A huge number of the stories they told about each, both mythological and historical, were about people who failed to fear the gods and paid dearly for it.

Once upon a time in Greece there lived a man whose name was Actaeon. He had divine ancestry, although he himself was human. One day, he and his friends went out hunting for deer, and Actaeon, alas, brought along his dogs.

The hunting party and their hounds stalked the woods from morning till noon, without success. The day grew hotter and hotter, and Actaeon left his friends to search for water. He walked into a cool, dark part of the forest, and, pushing through a thicket of trees, found a beautiful clear pond. It in was the goddess Artemis and her band of huntresses, all of them utterly naked.

Actaeon tried to flee—he knew instantly that he had committed a terrible crime in seeing a goddess naked—but Artemis saw him first. She didn’t kill him, or turn him to stone, or rip out his eyes. Instead, she said, simply but coldly, “Say nothing.”

But Actaeon was terrified and, without thinking he cried out for his friends: “Help!” And at that moment he began to change. His fingers fused and hardened, his hair knotted and forked, he tried to scream, but all that came out was the call of an animal. Artemis had transformed him into a deer!

He ran, but that was the worst thing he could have done. As his dogs saw the bolting deer, they chased after it, caught it, dragged it down, tore it apart. Actaeon tried to cry out for his dogs to stop, that it was him, their master, but of course they couldn’t understand him. And that was the end of Actaeon. 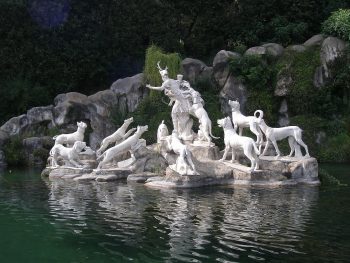 A sculpture group showing the Actaeon story from the gardens of the Palace of Caserta, in Italy. Image by user japiot from Wikimedia commons, licensed under CC-BY-SA-3.0-migrated

Tantalus was having a feast, and he invited all the gods of Olympus to come. This Tantalus was one of Zeus’ many children, and had dined on Olympus himself. The gods had no reason to suspect anything might be amiss. But something terrible was about to happen.

Who can say why Tantalus did what he did? Maybe he wanted to prove he was smarter than the gods; maybe it was a kind of awful sacrifice; maybe he was just a terrible father. Whatever the reason, this is what he did: He killed his son Pelops, chopped him up, cooked him in a stew, and served it to his divine guests.

As the gods sat down to dinner, all of them knew immediately that something was wrong. They were gods, after all. “Nobody eat!” cried Zeus, and nobody did—except for Demeter, goddess of the harvest. She had just lost her daughter, and was so distracted by her sadness that she didn’t hear what Zeus had said. A single morsel of Pelops passed her lips, and she knew instantly what she had done.

Zeus, burning with rage, cast Tantalus immediately down into the Underworld, where he was made to suffer a terrible punishment. He was made to stand forever in a pool of cold, refreshing water, under a tree with juicy, delicious fruits. Every time he bent down to take a drink, the water subsided so he couldn’t drink it, and every time he reached up to grab a piece of fruit, it pulled back so he couldn’t eat it. (This is where the English word ‘tantalizing’ comes from).

Pelops, by the way, was fine: Zeus had him reassembled good as new, except for the tiny bite Demeter had taken. It had been his shoulder, so it was replaced with a piece of ivory.

The Feast of Tantalus. Image by user Shakko from Wikimedia Commons, in the public domain.

Publius Clodius Pulcher and the Chickens

In 249 B.C. Rome had been at war with Carthage, the great African city, for fifteen years. Because the war was being fought over the island of Sicily, it was primarily a naval affair. That year the Roman consul was Publius Clodius Pulcher, who as consul was also general and admiral of Rome’s fleet.

The Romans did nothing without consulting the gods first, and they had various ways of doing this. One of the most solemn was the omen of the sacred chickens. All armies carried a cage of chickens with them, and before beginning any campaign they would feed the chickens. If the birds ate, the gods were favorable, and the campaign could proceed; if they didn’t, the gods were displeased, and the campaign was delayed.

So Clodius had the sacred chickens brought out onto the deck of his ship and fed. They didn’t eat. In a rage he cried, “If they don’t want to eat, they can drink,” and tossed the chickens overboard into the sea. Then he ordered the ships into battle.

The Roman fleet, the story goes, was wiped out. Don’t mess with the sacred chickens.

These stories may seem gruesome or weird—I won’t disagree—but all cultures have stories about people doing things they shouldn’t and getting their just deserts. It’s a way of reminding us of our values, the things that are really important. Are there similar kinds of stories you can think of from our own culture?