The popular book and television series, Game of Thrones, portrays a world rich with magic, adventure, romance, and history. While most fans of the series thoroughly enjoy the refreshing originality of the series; others would say that Game of Thrones is simply a fantastical interpretation of actual historic events and themes. In this post, I will attempt to analyze some of these historic references that may be obvious or not so obvious. While it is known that a majority of the history that Game of Thrones is based on is much later than Ancient Rome (1400′s or later); I would argue that there are several examples from Ancient Rome that relate to this series.

DISCLAIMER: If you are new to the series and are not up to date on the HBO series’ episodes, I should warn you that there are spoilers ahead! I will not be discussing any events that lie beyond the current HBO series (OathKeeper;Episode S4E4) as I do not wish to deter those who have not read the books from this post. Any quote from the books will not reveal any spoilers or new information.

(As always, please excuse any language- it is after all Game of Thrones)

These two figures represent the black sheep of their families. Both Tyrion and Claudius are born into prestigious families of power, and both are ridiculed and belittled for their physical abnormalities. However, none of their physical traits interfere with their witty minds and capability to lead (in Tyrion’s case: into battle a few times and in Claudius’ case: ruling Rome and into Britain).  I, of course, refer to the Emperor Claudius that many people know from Robert Grave’s series “I, Claudius.” In which, Claudius has the good sense to “play the fool” in order to be overlooked in the chaos and murders of those wishing to be emperor. Tyrion unfortunately does not have this reticent talent.  From the “I, Claudius” series:

Livia: Tiberius wants to be loved, at least after his death if not before. And the best way to insure that… [in reference to Caligula becoming emperor]
Claudius: …is to have someone worse to follow him. Yes, naturally. He’s certainly no fool.
Livia: He’s the biggest fool in my family. I’ve always thought that that was you. But I think now… I was wrong.
Claudius: [Claudius pauses, crafting a response] Grandmother, after all these years you didn’t invite me to dinner just to tell me this.
Livia: Wine has made you bold, hasn’t it.
Claudius: You said you kept in with Caligula because he was to be the next emperor.
Livia: Lost your stutter too I see.
Claudius: But if by then you’re dead, what difference can it make to you?
Livia: Oh, it makes a lot of difference. And that’s really why you’re here.
[Pleadingly]
Livia: I want to be a goddess, Claudius.

These two guards of the highest degree and class are sworn to protect their king and/or emperor. They are usually loyal, but are loyal (more so) to those with the large coffer . While the Kingsguard swear their lives to their king and forsake women and children; the Roman praetorian guards are body guards who were allowed to have a family. Furthermore, the Kingsguard is used as a political tool by various characters to promote their allies and give power. While the praetorian guard is both a political tool, but at the same time it becomes its own political body. They were even able to claim Claudius as emperor of Rome. 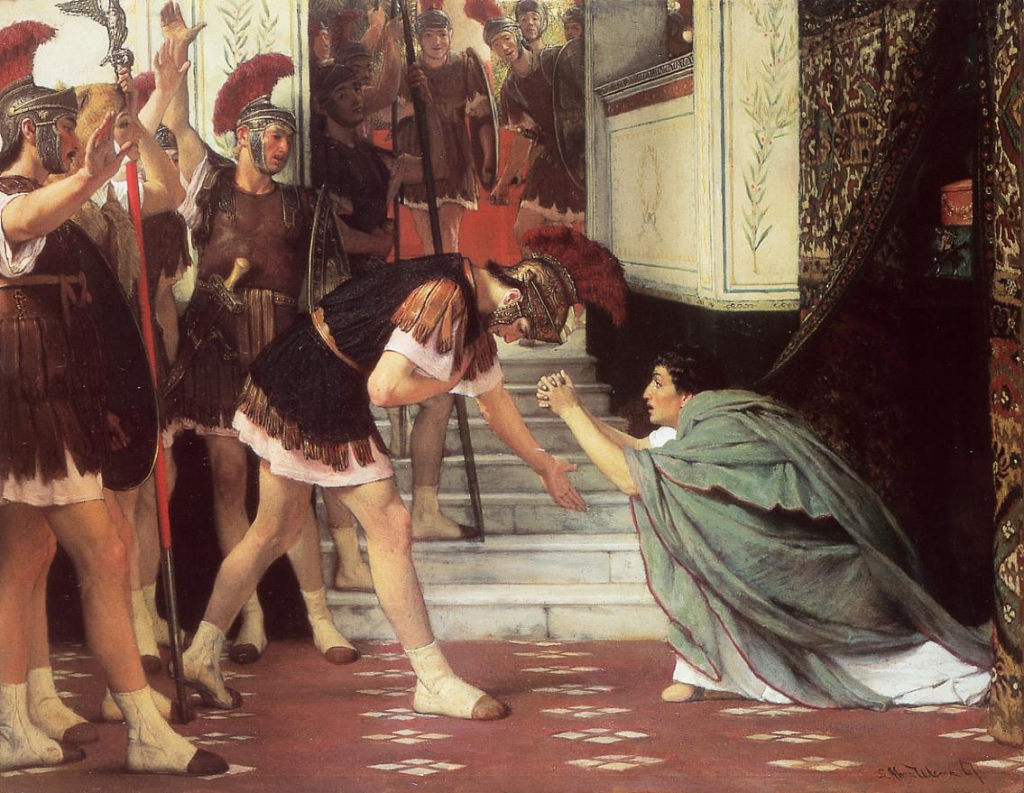 Proclaiming Claudius Emperor, by Lawrence Alma-Tadema, oil on canvas, c. 1867. According to one version of the story of Claudius’ ascension to the role of Emperor, members of the Praetorian Guard found him hiding behind a curtain in the aftermath of the murder of Caligula in 41, and proclaimed him emperor. 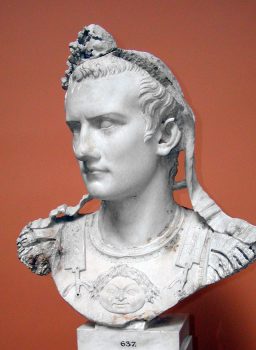 Look like any we know from Game of Thrones? Bust of Caligula at the Ny Carlsberg Glyptotek museum in Copenhagen Courtesy of Louis le Grand & WikiCommons.

For a Great Comparison Picture- view it here.

Perhaps it is madness or cruelty that is the common thread between these two individuals.  In regards to Caligula: “Some scholars have suggested that an illness made him come unhinged—possibly temporal lobe epilepsy, hyperthyroidism or Wilson’s disease, an inherited disorder that can cause mental instability.” (Cohen; History Lists) If you are unfamiliar with all the crazy and “mad” actions of this Roman Emperor; read on:

He went out of his way to humiliate the senate (Suetonius says that he intended to make his horse consul), and encouraged treason trials for his own financial benefit. He also insisted on being treated as a god (in contrast to the wiser policy of Augustus). Excavations in the Roman forum in the summer of 2003 confirmed that he incorporated the ancient Temple of Castor and Pollux within his palace – a sacrilege reversed by his successor Claudius I.

Gaius had three sisters, with whom he was alleged to have committed incest, and they were given unprecedented public honors, being included in the soldiers’ oath of allegiance.

Joffrey’s cruelty and madness can be accredited to his parent’s incestuous relationship and thus producing his abnormal genetics (i.e. mind). However, George R.R. Martin neither mentions nor confirms this hypothesis. However, it should be noted that George R.R. Martin is familiar with Emperor Caligula’s exploits, because he named one of his deviant cats: Caligula.

The Year of the Five Emperors refers to the year 193, in which there were five claimants for the title of Roman Emperor. The five were Pertinax, Didius Julianus, Pescennius Niger, Clodius Albinus and Septimius Severus. All these “emperors” fought, plotted, and bribed their way to power.  You can read about the crazy year of 193; here.

In Game of Thrones, the War of the Five Kings includes Robb Stark, Joffrey Baratheon, Renly Baratheon, Stannis Baratheon, and Balon Greyjoy; all of whom are contending for the Iron Throne after Robert Baratheon’s death.

The following video is from the episode “The Lion and the Rose” in which Joffrey has a performance of the War of the Five Kings shown to his guest:

The Mad King vs. Emperor Nero

Robert Baratheon: “What about Aerys Targaryen? What did the Mad King say when you stabbed him in the back? I never asked. Did he call you a traitor? Did he plead for a reprieve?”

Jaime Lannister: “He said the same thing he’d been saying for hours… “Burn them all.””

The Mad King, also known as Aerys II Targaryen, was known for his madness and his obsession with fire and burning people alive. His madness is often attributed to the incestual relationships his family, the Targaryens, were known for having. Jaime Lannister, also known as the King Slayer, reveals exactly how mad the Mad King was (WARNING-there may be some language):

The reason I pair the Mad King to Nero is due to the infamous phrase “Nero played the fiddle while Rome burned.” This phrase that portrays this emperor as uncaring and slightly delusional. First, I should state that the phrase itself is anachronism. There were no fiddles during the Great of Fire ( 64 CE). Nero thus played a fiddle-like instrument known as the lyre. Suetonius records Nero’s singing and playing in his “Life of the Twelve Caesars:”

For six days and seven nights destruction raged, while the people were driven for shelter to monuments and tombs…Viewing the conflagration from the tower of Maecenas and exulting, as he said, in “the beauty of the flames,” he sang the whole of the “Sack of Ilium,” in his regular stage costume.

Thus, I feel as if their love for fire and mad attitude render them worthy comparisons.

Roman Empire vs. Map of Westeros

My final point is to illustrate the remarkable resemblance between Westeros and the Ancient Roman empire in maps. Here is Westeros:

A cleaner more precise map; can be found here in an interactive map (like google maps). 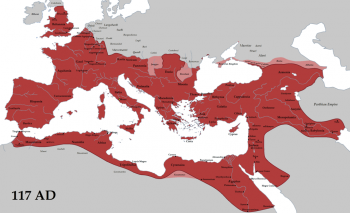 As you can see, the capital (Rome or King’s Landing) is in the southern realm of the map, the Wall (Hadrian or Night’s Watch) is north, the East is exotic and unfamiliar (like Egypt, Ancient Near East, etc.) and so on. The climates are quite similar to the ancient world with northern being colder and southern being more Mediterranean. Here is a behind-the-scenes look on how the HBO production staff handled the realms, worlds, and sets. And you will be able to see how the makers of Game of Thrones pulled from history (and the real world) to create the HBO series.

Thank you for reading! Please feel free to comment below for questions or themes you wish for me to explore in next week’s post or the following weeks!