Ten Latin Spells From Harry Potter Posted by Brittany Britanniae on May 7, 2014 in Latin Language 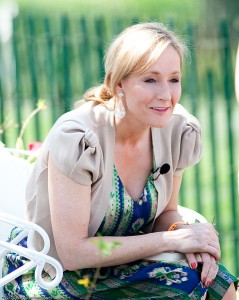 The magical world of J. K. Rowling is known by millions (if not billions) of children, teens, and adults. Especially  those who grew up reading the books and then watched the magic come to life of the silver screen later on. J.K. Rowling created the world of Harry Potter from her vast imagination (and personal experience) and perhaps from other sources.  These included Dickens and Tolkien, which she says filled her free time during her college years.

J.K Rowling attended University of Exeter and received her BA in French and Classics. It is evident that she received a degree in Classics, because the Harry Potter series is filled with Latin words and ancient mythology. While the mythological references may be easier to see in character names (i.e Minerva McGonagall as in Minerva the Roman goddess of wisdom); the Latin reference may not be as discernible.

SPELLS THAT USE “LATIN”

Accio is a verb that means “I call, summon, send for, invite;” Harry Potter uses it in the first challenge of the TriWizard Tournament.

Stupefy: Pseudo-Latin “I cause (you) to be stunned.

Stupefy is a stunning spell which is a hodgepodge of two Latin words. The Latin verb stupeo meaning “to be stunned, numbed, astonished”  and fio meaning “make, do, cause to happen.” The spell is used to stun opponents.

Reducto: Latin “Having been reduced” or ” I bring back or withdraw”

Reducto is not the 1st singular form (the “I reduced” form), but a perfect passive participles meaning “having been reduced.” However, it could be from the rare verb reducto  (used in a Aurelius Victor “De Caesaribus“) meaning to withdraw. In either case, the spell itself seems to be used as a pulverize spell which “reduces” its intended object to its basic form. You can see Ginny cast reducto at the end of this video.

This is a wand extinguishing spell. It is used several times by characters in Harry Potter to dim their wands and proceed with their activities clandestine.

Let’s start off with the easier word, maxima meaning “great, large, or vast.”  Now for the difficult part, I was a bit unsure why Rowling decided on lumos. It closely resembles the Latin lumen meaning “light, lamp,” but the most obvious word she should have used would have been “Lux” which actually means “light, brightness.” Furthermore “Lux” (as a wand lighting charm)would have been a nice parallel to “Nox” (the wand extinguishing spell). That being said, lumen is a neuter singular noun and thus I have to assumer lumos would be as well ( but the –os ending is more Greek to me). Since lumen is a neuter singular noun, maxima can only be feminine or netuer plural. Thus, I would have to argue that Rowling forgot her grammar rules or simply like the way these two words sounded together.

Expecto means “I await, look for, hope or desire for;” while Patronum means “a guardian, protector, or defender before a court.” It is nice that Rowling recalled her Latin grammar in this saying, since Patronum is declined properly to the accusative form(direct object).

**In this clip, there is a nice moment were Harry Potter actually calls the result of the spell (usually some sort of animal) a “Patronus” which is the nominative (subject form) of the noun. YAY for Latin!

In proper Latin, it’s hominem revelo, “I unveil the man.” It is therefore a logical thing to say when outing someone hiding under an invisibility cloak.

The curse would obviously be used to command people or subject them to mind control. The strength and its the duration of the curse is determined by person who cast it, as well as by the level of resistance of the victim. The spell is formally known as the Imperius curse. Imperius which is not Latin, but Pseudo-Latin. Rowling seems to have simply added the –us ending to the Imperio root. Today, the words “empire or imperial” are derived from this very common Latin word.

This curse, again, would be implanted to torture people. The curse is so powerful that it can even torture a person(s) to the point that they are exhausted to death or causes permanent amnesia and insanity (the case of Neville’s parents, who were tortured by Bellatrix Lestrange). This spell is known as the Cruciatus curse, which is perfect Latin. Cruciatus is derived from Crucio and is the perfect passive particple form of the verb. Furthermore, the resemblance to the word crucifixion is apparent. Crucifixion was a standard form of execution in ancient Rome.

2004 Rowling said the following about the Killing Curse:

It is an ancient spell in Aramaic, and it is the original of abracadabra, which means ‘let the thing be destroyed.’ Originally, it was used to cure illness and the ‘thing’ was the illness, but I decided to make it the ‘thing’ as in the person standing in front of me. I take a lot of liberties with things like that. I twist them round and make them mine.”[

So, where does the Latin fit in?

Rowling may have changed the ending of the spell to include the Latin word cadaver which means “corpse.”

**However, I should note that Harry Potter fans and scholars have largely debated the origins of both abracadabra, its meaning, its origins, and thus how it should be translated in Harry Potter. Regardless, it is a killing curse, which only two people have survived.

Here are some examples of Latin references that are NOT spells:

Severus Snape: Severus means “strict” or “harsh” in Latin. This obviously fits his character as a professor of Potions and the Dark Arts.

Ludo Bagman: Ludo means “I play” or “I play a game” in Latin. In the series, he was assigned to the post of Head of the Department of Magical Games and Sports; thus, he was responsible in part for both the Quidditch World Cup and the TriWizard Tournament (both events are described in Harry Potter and the Goblet of Fire).

Dolores Umbridge: Dolores means “pain, ache, suffering, and anguish.” Umbra means “shadow, uninvited guest, pretense, representation, or semblance.” Therefore, her name comes to mean a “painful one who is uninvited,” or “suffering but puts up a pretense( of being sweet),” or lastly ” she is the representation of anguish.” In Harry Potter and the Order of the Phoenix,  she caused Harry a lot of pain in various detention-like settings.

Albus Dumbledore: Albus means “white” or “fortunate”  in Latin. The books  always say Dumbledore has a white beard. But, this Latin term could also refer to the fact that he is not a dark or evil wizard.