One to a Million in Latin and Roman Numerals Posted by Brittany Britanniae on Nov 5, 2013 in Latin Language, Roman culture

This week we will be learning  Roman Numerals and their Latin names, so that later this month we can learn how to write dates in Latin using Roman months, ordinal numbers, and dates. But first things first, how many of you can read the numbers on this clock? 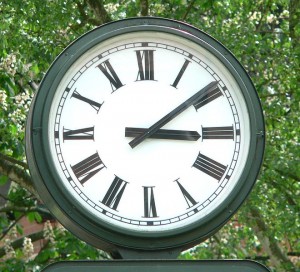 Well, there are four rules to remember when making numerical values with Roman Numeral:

1. A lesser numeral placed before another numeral represent subtraction.

2. Conversely, a lesser numeral placed after another numeral represent addition

3. No numeral will ever be used more than three consecutive times[ sometimes it is seen in older Latin texts, but this is rare]

An earlier blog post already addressed ALL the numbers from 1-100; which can be seen here. But for review, let’s look at some basics:

Well, now that you know some numbers from 1-100; it should quite simple for the hundreds.

For a closer look at the declensions (masculine, feminine, and neuter) of the tens, hundreds, and one thousand; please visit here and here.

*Please note that the number would be consecutively touching and there would be no spaces in between. This is merely a formatting problem.

If you are still having problem with convert into Roman Numeral refer to here for additional help and support.

Hope this helps any beginners of Latin or Roman Numerals!