The Who, What, When, Where and Why of the Ludi Plebeii Posted by Brittany Britanniae on Nov 13, 2013 in Latin Language, Roman culture

In understanding the culture and lifestyles of the ancient Romans, we should look to their holidays to both their gods, monuments, and national victories. An amazing list of Roman festivals can be found here. 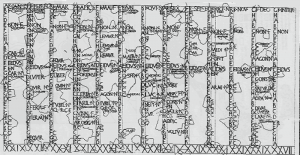 Drawing of the fragmentary Fasti Antiates Maiores (ca. 60 BC), a Roman calendar from before the Julian reform, with the seventh and eighth months still named Quintilis (“QVI”) and Sextilis (“SEX”), and the intercalary month (“INTER”) in the far righthand column (see enlarged)

WHAT IS THE LUDI PLEBEII
The Ludi Plebeii  comes from the two words ludi (meaning play, games, etc.) and plebeii (meaning a “pleb” or plebian: a commoner person as in comparison ta member of the royal or upper class). The Ludi Plebeii or Plebeian Games were an ancient Roman festival held from November (which is derived from novem or 9, because it was originally the ninth month of the year) 4th to the 17th.
The ludi or game factor of the festival was because this celebration had both theatrical performances( such as comedy, satire, tragedy plays) and athletic competitions (running, chariot racing,etc)
WHEN 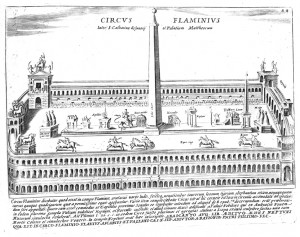 BY WHOM
The Ludi Plebeii were presented by the plebian Aediles. The plebian Aediles ( from the Latin aedes meaning building) were an office of the Roman Republic. They were responsible for maintaining public buildings and regulation of public festivals such as the Ludi Plebeii.  A helpful site to understand the different levels of political office can be found here.

WHY
The importance of the Ludi Plebeii is because it represents one of the earliest national holidays of liberation. Similar to the United State’s Fourth of July or the French holiday Bastille Day, the Ludi Plebeii celebrated the plebeian’s political liberty.  The Ludi Plebeii are thought to be the oldest public festival having been established roughly in 220 BCE. The great orator Cicero considered them Rome’s oldest Ludi. The liberation that is being celebrated often varies from the tyranny of the Tarquins (an Etruscan Roman family whose history can be read on here ) or the suppression and dominance of the patricians (who were the ruling class of Rome in the struggle known as the Conflict of the Orders). Some historians even conjecture that the festival was celebrated before 220 BCE, but due to the lack of a religious calendar it was not recorded.
WHAT DID THEY DO

The dates vary for the happenings of the festival; however, they seem to follow a certain pattern:

During the Ludi Plebeii, the first ceremonial rite was  a feast to Jupiter (Zeus) known as Epulum Iovis was held on November 13th (some sources say the Ides of November which is the 15th). This feast entitled the Senator to eat on the Capitoline as the public’s expense while the Roman plebeians or commoners dined in the Forum. Following the feast were several days of performance and games ( theses days vary from 9 of performance and 4 of games to smaller denominations). On the day of the Games, a great Pompa, or procession, led by statues of the Capitoline Triad, would proceed to the Circus, where Gods and men joined to watch the races. The games usually ended on the 17th of November. 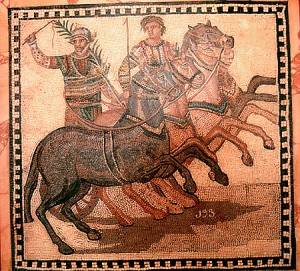 A winner of a Roman chariot race, from the Red team.