Salvete Omnes, This week I would like you to think about your superstitions while we visit ancient ones…Superstitions were an important staple in many ancient cultures, and the Romans were no exception. In the religions of ancient Rome, an omen, plural omina, was a sign intimating the future, considered less important to the community than a prodigium but of great importance to the person who heard or saw it. Omina could be good or bad.

Again, when he was offering sacrifice, the soothsayer Spurinna warned him to beware of danger, which would come not later than the Ides of March. 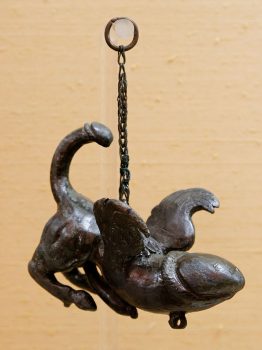 By pouring vinegar upon the hinges of a door, a thick liniment is formed, which, applied to the forehead, will alleviate headache

Whilst he was assuming the duties of the consulship thunder was heard; the augurs were summoned and gave it as their opinion that there was some informality in his election. The patricians spread a report that as that was the first time that two plebeian consuls were elected together, the gods were showing their displeasure. Marcellus resigned his office and Q. Fabius Maximus was appointed in his place; this was his third consulship. This year the sea appeared to be on fire; at Sinuessa a cow brought forth a colt; the statues in the temple of Juno Sospita at Lanuvium sweated blood and a shower of stones fell round the temple.  (The History of Rome, 23.31)

I would love to hear your thoughts or of other superstitions from Rome you have heard of! Thanks for reading!