Rome’s Birthday: Celebration of Romulus and Remus Posted by Brittany Britanniae on May 20, 2021 in Roman culture 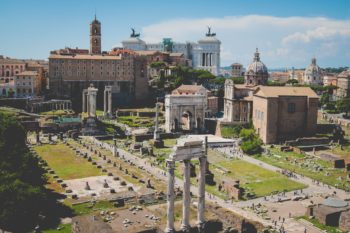 Despite lockdowns, people found ways to celebrate this joyous occasion. One of the highlights from the celebration was “The Superintendency of Rome, the archeological office that oversees all of Rome’s archeological sites and activities, unveiled a relief of Rhea and her sons re-mastered to its original colors and vibrancy”(Moreno, 2021).

Romulus and Remus’ Parentage and Birth

Rhea Silvia was discovered to be pregnant. It was believed it was a divine conception. It was custom that any Vestal Virgin betraying her vows of celibacy was condemned to death. However, King Amulius, fearing the wrath of a potential paternal god, did not wish to directly stain his hands with the blood. So, King Amulius imprisoned Rhea Silvia and ordered her twins’ death. Thus, Romulus and Remus were thrown into the Tiber River.

The Discovery of Romulus and Remus 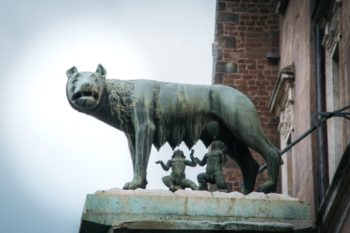 The river god Tibernus ensured their safety by calming the river. He, also, caused their basket to catch on a nearby fig tree. The twins were first discovered by a she-wolf or lupa. She suckled them. Eventually, they were discovered and cared for by a shepherd and his wife. The two boys grew up to be shepherds.

After Amulius’ death, the brothers rejected the offer of the crown of Alba Longa. They left seeking to find their own city. The brothers quarreled over the location of the foundation of their new city. Romulus wished to start the city on Palatine Hill. While Remus wished to found it on the Aventine Hill.

The Argument and Augury

In order to settle their disagreement, they agreed to consult augury. So, each brother prepared a sacred space and began to watch for birds. Remus claimed to have seen six birds. While Romulus said he saw twelve birds. Romulus asserted that he was the clear winner by six birds. But, Remus argued that since he saw his six birds first, he had won. The brothers remained at a standstill and continued to quarrel until Romulus began to build walls around his hill.

Death of Remus & Founding of Rome

In response to Romulus’ construction, Remus made continuous fun of the wall and his brother’s city. Remus was so bold as to jump over Romulus’ wall jestingly. In response to Remus’ mockeries, Romulus, angered, killed him. There are several versions as to how Remus was killed on the day Rome was founded. Remus’ death and the founding of Rome are dated by Livy to April 21st, 753 BCE.