#1. Only 23 Letters in Classical Latin Alphabet

The earliest known inscriptions in the  Latin alphabet date from the 6th century BC. So, the Romans used just 23 letters to write Latin; that’s after they added the Greek letters “Y” and “Z” to the alphabet they inherited from the Etruscans. Can you guess which letters are missing? 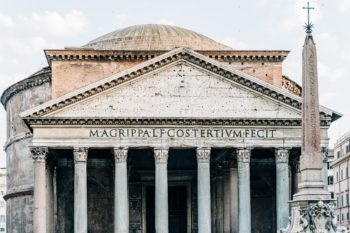 The Pantheon in Rome – a unique building in Roman architecture – has been continuously in use throughout its 2,000-year history. Its dome is still the world’s largest unreinforced concrete dome. An example of Classical Latin Alphabet. Photo by Gabriella Clare Marino on Unsplash.

#2. No Lowercase Letters
The Latin alphabet started out as uppercase letters known as roman square capitals. This can be seen on the Pantheon image “M.AGRIPPA.L.F.COS.TERTIUM.FECIT” meaning “Marcus Agrippa, son of Lucius, built this when he was consul for the third time.”

The lowercase letters evolved through cursive styles that developed to adapt the inscribed alphabet to being written with a pen. To learn more about the development of lowercase letters, click here.

If you see a V or U in Latin, they are both the same letter. The letter is pronounced either “w” or “u” as in English (as a consonant or as a vowel respectively). There is no “v” sound as in English in ordinary Latin.

In Latin, there are two semivowels, i and u/v. When these begin words or occur between two vowels, they have the value of a consonant.

For example, uia (way or path in Latin) was not “oo-ee-ah” but rather “wee-ah” and is nowadays written via.

#5. What about “W” in the Classical Latin Alphabet?

So, the “w” consonant did not exist in Latin. Ironically, the letter “w” is pronounced “double u” even though it technically looks closer to “double v.” Latin’s pronunciation of V as a U sound is the reason “w” is called “double-u.”