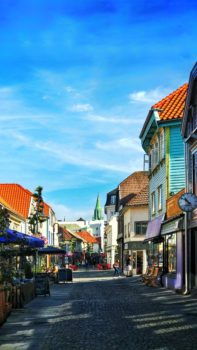 Per Inge Torkelsen made jokes in the Stavanger dialect. (Photo by Victor Malyushev on Unsplash; no copyright.)

Gi ungdommen en flaske brennevin før idretten tar dem! (Give the young people a bottle of brandy before they’re possessed by sports!) This quote by Per Inge Torkelsen is very well-known in Norway. A famous comedian and klovn (clown) from the city of Stavanger1where he founded the Norwegian Children’s Museum, Torkelsen passed away eight days ago. Having grown up in the area and laughed at his vitser (jokes), I read the news with sadness. But let’s celebrate the old spøkefugl (jokester, literally ”joking bird”) with a bit of humor! 🙂

It can be challenging to understand Norwegian jokes as they’re often tied to norsk kultur (Norwegian culture). You often have to know what’s going on in Norge to get the point. Norwegians also love to use dialect words or ordspill (puns) in their jokes. Here’s a silly little joke that I like:

So, the joke translates as:

What’s the similarity of a dog? It gjør in both ends.

Some kinds of jokes are so popular that they’ve become their own genres, for example svenskevitser (jokes about Swedes!)

Here you have to know that pære means both ”pear” and ”light bulb”:

– Do you know why the Swedes climb up the lamp posts? – To see if the pærer are ripe.

A hallmark of Norwegian humour, I think, would be that it’s much more underfundig (sly, subtle, ”quaint”) than the humour of many other countries, which seems to be more direct or ”in-your-face”. In order to get an idea of what I mean, please take a look at one of the most famous Norwegian sketches ever – Medieval Helpdesk by Knut Nærum (starring Øystein Backe and Rune Gokstad, NRK 2001):