Christmas Countdown Posted by Bjørn A. Bojesen on Nov 30, 2019 in Traditions

Julemåneden er nesten her. (The Xmas month [= December] is almost here.) Like many Norwegian shops, your blogger kan ikke vente med å pynte til jul (can’t wait decorating for Christmas). Here’s a typical November pre-launch of a julekalender (Xmas calender) with 24 sweets, one for each day until julaften. But don’t click the first one until tomorrow! 🙂 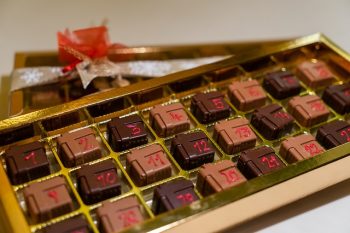 An adventskrans is a wreath with 4 lys (candles). On each of the 4 pre-Christmas Sundays (this period is known as advent), a new candle is lit (1 candle in total on the first Sunday, 2 on the second etc.).

Most Norwegians hope for julesnø (Xmas snow), and while there are no guarantees, in many places in Norway you can still experience a hvit jul (white Xmas)

Julestria is the busy time of preparing everything for Xmas, such as buying gaver (gifts) and decorating your home.

Kos (cosyness) is an important ingredient of the  julemåned. When Norwegians get home from work or school, it’s already dark in most of the country, and people do their best to enjoy life indoors.

A julestjerne is a Christmas star, on the sky or as a decoration. A classic Norwegian Xmas movie is called Reisen til julestjernen (The Journey to the Christmas Star).

Nisser are important creatures of Norwegian folklore. They don’t quite exist in English-speaking countries, but can maybe be thought of as pixies. They wear red luer (caps), and the Xmas ones are called julenisser (of course!)

Traditionally, Norwegian housewives were aiming to bake syv sorter (seven kinds) of Xmas cookies. Today, many try to keep the tradition alive, and both women, men and children participate.

During December, many people visit julemarkeder (Xmas markets). In Oslo, the Norwegian capital, there are several, and they usually sell hot gløgg (a kind of mulled wine with raisins – often without alcohol) for people to keep warm.

Has your family bought a juletre (Xmas tree) yet? Most Norwegian homes have one, and it’s placed in the sitting room. It’s mostly a gran (spruce), but in some parts of Western Norway it can also be a furu (fir-tree).

Christmas is celebrated by the majority of people in Norway, and far from all of them are active Christians. (The word jul is older than the Christian religion in Norway; for the Vikings, Yule was a celebration of light.) Still, the religious link is important to a lot of people, who decorate their homes with things like engler (angels) and julekrybber (nativity scenes).

Many workplaces organize Xmas parties called julebord. Bord means ”table” – but the participants certainly care more about the food and drinks that are on the table. 🙂

Har du husket å sende julekort? (Did you remember to send Xmas cards?) Norway is a long country, and posten (the post/mail service) takes its time!

Julenissen is the Norwegian version of Santa Claus. No matter what the Finns say, he certainly lives somewhere in Northern Norway. 😉

In the pre-Christmas period, some Norwegians make fancy pepperkakehus (gingerbread houses) and even gain medals in competitions. (After Xmas the sweet buildings, of course, are eaten.)

Julehefter are a Norwegian speciality. They’re special Christmas editions of popular comics, and can be bought in supermarkets.

Grøt (porridge) plays a huge role in Norwegian Christmas. At festive events risgrøt med smør, sukker og kanel (rice porridge with butter, sugar and cinnamon) is enjoyed. In the countryside, some people still place a bowl of porridge outside for nissen (the pixie).

A typical Norwegian tradition is to hide a mandel (almond) in either porridge or riskrem (sweet rice porridge mixed with cream). The lucky eater who can show the almond to the others gets a mandelgave (”almond gift”). This is very often a marsipangris (marzipan pig).

Many barn (children) gleder seg til jul (look very much forward to Xmas). To shorten the wait, Norwegian tv broadcasts a special julekalender (Xmas calendar) with 24 small episodes, 1 each day.

For julaften (Xmas eve) on the 24th, a lot of mat (food) has to be prepared. What Norwegians eat for Christmas varies from region to region, but ribbe (a kind of pork) and pinnekjøt (a kind of mutton) are very common.

The day before Xmas is called lille julaften (little Xmas eve), and this is the time to make the last preparations: Buying that missing gave (gift), pynte treet (decorating the tree)…