Waving the flag Posted by Bjørn A. Bojesen on May 17, 2019 in Uncategorized 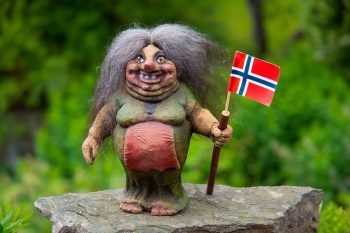 Gratulerer med dagen! (Congratulations with the day!) It’s 17. mai again, and Norwegians all over the world are celebrating not only grunnloven (the constitution), but all things Norwegian. This year, let’s take a look at the beautiful Norwegian flagg.

No matter where you go in Norway, you’re bound to catch a glimpse of the pennant in rødt, hvitt og blått (red, white and blue). Even in the most isolated bygd (settlement, village) you’ll see it shine majestically through the valley fog. Today, children have been waving it in numerous barnetog (children’s parades), and kongen (the king) and many other adults have been wearing ribbons in the national farger (colours).

Although it seems to be everywhere, the Norwegians didn’t always have their flag. During the four centuries when Norway was ruled from Copenhagen, Denmark, Norwegians would often use the Danish flag. (The two flags are quite similar, except that the Danish one lacks the blue cross in the middle.) Before that, Norwegians seem to have used a ”flagified” version of riksvåpenet (the coat of arms), which shows a yellow lion on red (holding an axe like a good viking lion!)

When Norwegians said goodbye to Danish rule, they initially went for a quick fix flag ‑ a golden lion sewn onto the Danish flag. (Image courtesy of Wikimedia, CC BY-SA 4.0 License.)

Boom, 1814, and Norway breaks up with Denmark. Just sewing that yellow coat-of-arms lion onto the Danish flag didn’t quite satisfy the Norwegians, so the hunt for a truly Norwegian flag began. According to the Norwegian encyclopedia, the current flag was designed by Frederik Meltzer and approved by Stortinget (the Norwegian parliament) 17. mai 1821. It’s been used and loved ever since. (Let’s not talk about the brief intermezzo where Norwegians had to add a union symbol to the top left corner in order to please the Swedes.)

The shape of the flag was obviously inspired by the other Scandinavian countries, and says something about Norway’s geographic location (north!) and Christianity backstory. The colours represent frihet (freedom) and were maybe chosen because Meltzer liked the flags of the ”freedom nations” at that time – France and the USA. 🙂

What does the Norwegian flag mean to you?