Can you name most common board games in Polish? Posted by Kasia on Jun 1, 2021 in Culture, Holidays, Traditions, Vocabulary

Board games (gry planszowe) have been played, traveled, and evolved in most cultures and societies throughout history. Board games are tabletop games that typically use pieces moved or placed on a pre-marked board.

Why is this post about board games? Because today is an International Tabletop Day! And it is also Children’s Day (Dzień Dziecka) in Poland – board games are great gifts for any child!

5000 B.C. in the Middle East, games of chance were played, where players rolled dice made of bones, wood, stones, or turtle shells. 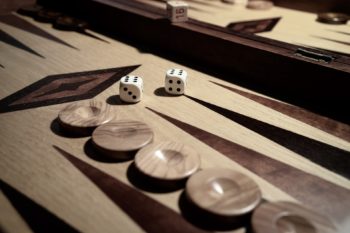 The oldest tabletop game (2000 B.C.) that has virtually remained the same was a game remarkably similar to backgammon (Tryktrak). It was called Ludus duodecim scriptorum: “the game of twelve markings”. It was played during the Roman Empire. Much like the modern version, the object of the game is to move your pieces along the board’s triangles and off the board before your opponent does. The main difference was that there were three dice instead of two. 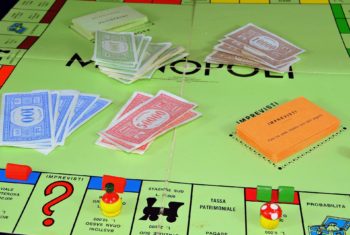 In 1903, one of America’s first board game designers, Lizzie Magie, created The Land Lord’s game. Players traveled around a square game board and bought different property. In 1935, she sold her patent to Parker Brothers and it has since been known as Monopoly (Monopol). Since its introduction to the market in 1935, over 250 million Monopoly games have been sold, and the game has been played by more than 1 billion people worldwide. One of the most popular board games in history, Monopoly was inducted into the National Toy Hall of Fame in 1998. 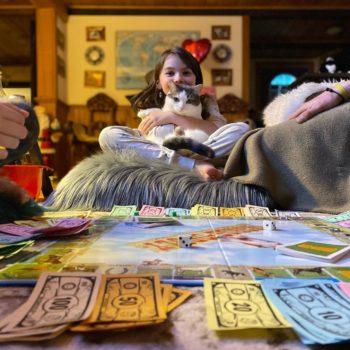 My family playing Horse-opoly!
Image taken by and used with permission from Kasia Scontsas

My daughters love monopoly and we play this game often. However, they ride horses and absolutely love horses! So the game that we have been playing lately a lot is Horse-opoly!!! The board features different breeds of horses while each property deed teaches players a little about that breed of horse. Instead of buying properties you buy horses, and instead of buying houses and hotels you buy hay bales and barns! A lot of fun.

Here are few other popular board games and their Polish names!

In 2012 popularity for tabletop games increases so much that International Tabletop Day was created a year later to celebrate gamers and to hold gaming events!

Coincidently my daughter is creating her own board game today. It is a part of her homework – a project where kids are designing a board game based on what they have learned this year in school! And she is doing an amazing job (hopefully one day the game will be popular 😉).

I hope each one of you will play a board game today! Which one is your favorite?