This church in Cracow is a must see for architecture lovers. Posted by Kasia on Apr 30, 2021 in Culture, History, Places to visit, Religion

Cracow (Kraków) holds everything from Gothic towers to great medieval castles to explore. Its rich variety of historic architecture includes Renaissance, Baroque and Gothic buildings. And the amazing baroque structure of St. Peter and Paul’s Church I will tell you about, will not disappoint all the people who love architecture!

Kraków’s palaces (pałace), churches (kościoły), theaters (teatry) and mansions (rezydencje) display great variety of color, architectural details, stained glass, paintings, sculptures, and furnishings. While Warsaw is known for one of the most ambitious reconstruction projects in post-war Europe, Kraków was not the site of the same destructive battles. While art and cultural treasures were looted by the train load, some of the greatest Gothic and medieval monuments, the Renaissance palaces and beautiful Baroque churches were largely left standing.

One of the churches that is particularly worth visiting in my opinion is St. Peter and Paul’s Church on Grodzka 54 St. It is a place that you can not just pass without being intrigued. While visiting Poland back in 2006 for the first time, my husband just couldn’t believe how amazing and mysterious the sculpted statues of the twelve apostles you see first outside were! 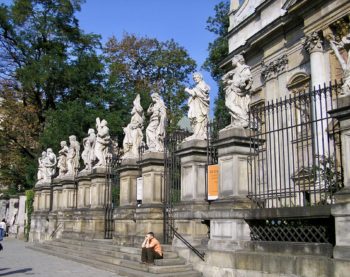 St. Peter and Paul Church in Kraków. Photo taken and used with permission from Kasia Scontsas

In the late 16th Century a lot of European money was being directed at church building in the continent’s major cities as a way of fighting the influence of the reformation there. One of the products of Catholic patronage from this period is this magnificent church. 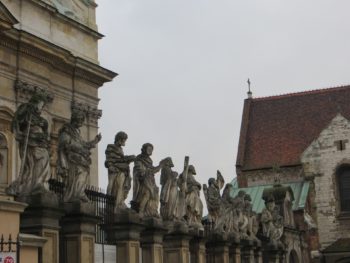 Image by Waldo Miguez from Pixabay

The front of the building itself is actually quite unique in Kraków, and is a prime example of increasing Italian architectural influence across the continent. The church is finished with Italian marble, and not the red-brick materials that were favored by Polish medieval architects before.

Visitors can admire the baroque figures of the 12 apostles set on twelve pillars and the elaborate stucco decoration by Giovanni Battista Falconi (stucco is construction material made of aggregates, a binder, and water; it is used as a decorative coating for walls and ceilings, exterior walls, and as a sculptural and artistic material in architecture). The scenes you will find inside are the lives of the church’s eponymous apostles (tytułowi apostołowie), St. Peter and St. Paul. There’s also a magnificent baroque altar piece and, one of the church’s main attractions for fans of Polish history, the crypt of Father Piotr Skarga (he was a monumental figure in Polish academic and religious history, and priest to the King Zygmunt III).

Another interesting fact is that in this church, on the February 10th 1906, the wedding of Karol Wojtyła and Emilia Kaczorowska, the parents of Pope John Paul II, took place.

The church (kościół) is used as a concert hall (sala koncertowa) for classical and baroque ensembles, while visitors can enter during the day to see the interior and subterranean crypts (podziemne krypty). Make sure to check it out next time you are in Kraków!