Do you know how Warsaw got its guardian mermaid? Posted by Kasia on Apr 27, 2021 in Culture, History, Places to visit, Travel & Geography

I’m pretty sure that most of you, who visited Warsaw, noticed different mermaid statues, carvings and paintings. They appear everywhere. Feisty and beautiful, this fish-tailed creature is called Syrenka, the guardian mermaid, The Mermaid of Warsaw! 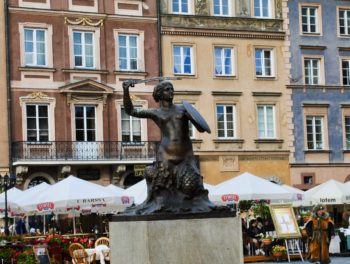 You may wonder, where did she come from? Well, there are two different stories. 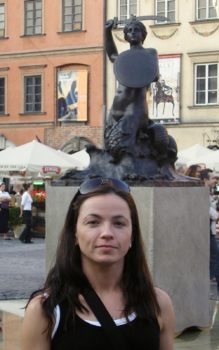 Myself in front of one of the mermaid statues. Photo taken & used with permission from Kasia Scontsas

First one is about Prince Kazimierz. While hunting in the marshlands (bagna) that are now Warsaw, he lost his bearings and faced a night in the open. Miraculously, a mermaid (syrena/syrenka) emerged and guided the prince to safety by firing burning arrows into the sky. Warsaw was founded out of gratitude, and the mermaid adopted as its emblem.

The second story suggests that the Mermaid of Warsaw originated from the Baltic Sea (Morze Bałtyckie), where she had a twin sister, the famous Little Mermaid of Copenhagen. Here the sisters split, one swimming to Copenhagen and the other down the Wisła. She decided to stop at the place where the Warsaw Old Town is now. Local fishermen (rybacy) soon noticed someone tampering with their nets, freeing the fish in the process, and teamed up to catch whoever was doing this. They soon changed their minds once they saw and heard the mermaid singing. All except for one, a greedy merchant (chciwy kupiec) who wanted to haul her off as some kind of prize (nagroda). But the fishermen would not have it. Alerted to her kidnap the fishermen decided to free her, and in thanks to the people in town who rescued her, the Syrenka swore to make it her life’s mission to protect Warsaw. This explains why you’ll see her armed with a sword and shield (uzbrojona w miecz i tarczę). 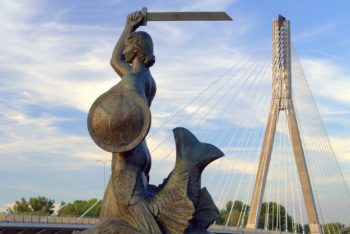 Syrenka statue by the Vistula River. Image by Henryk Niestrój from Pixabay

I definitely like the second story much better, but to this day nobody knows which one was actually closer to what really happened.

These are couple pictures I took back in 2012, while visiting Poland. It just happened to be a time when UEFA European Football Championship was co-hosted by Poland and Ukraine! So, as you see, the mermaid “participates” in different local happenings! 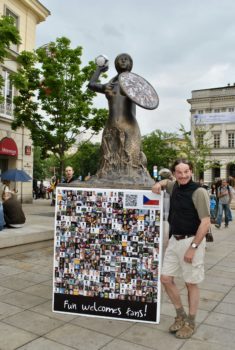 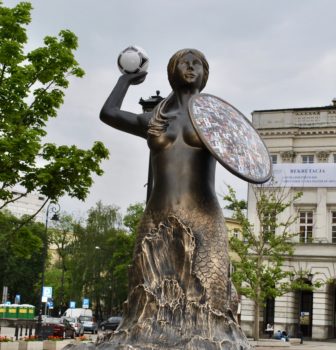 Please feel free to share in comments what was your favorite place you saw the Warsaw Mermaid at!