Fala, pessoal. Tudo bom? If you’ve checked as redes sociais (social media) lately, you probably noticed some of your amigos e parentes (friends and relatives) sharing an enigmatic picture composed of tiny coloful quadrados (squares). I was intrigued myself, until a friend introduced me to the captivating Wordle.

The story behind it is quite touching, actually. The jogo (game) took the world by storm, although it was originally intended as love gesture designed by engineer Josh Wardle, who wanted to create something unique for his word-game-loving girlfriend. And it was somehow out of passion, in this case for the Portuguese language, that tech developer Fernando Serboncini came up with our very own version, Termo (term in English). 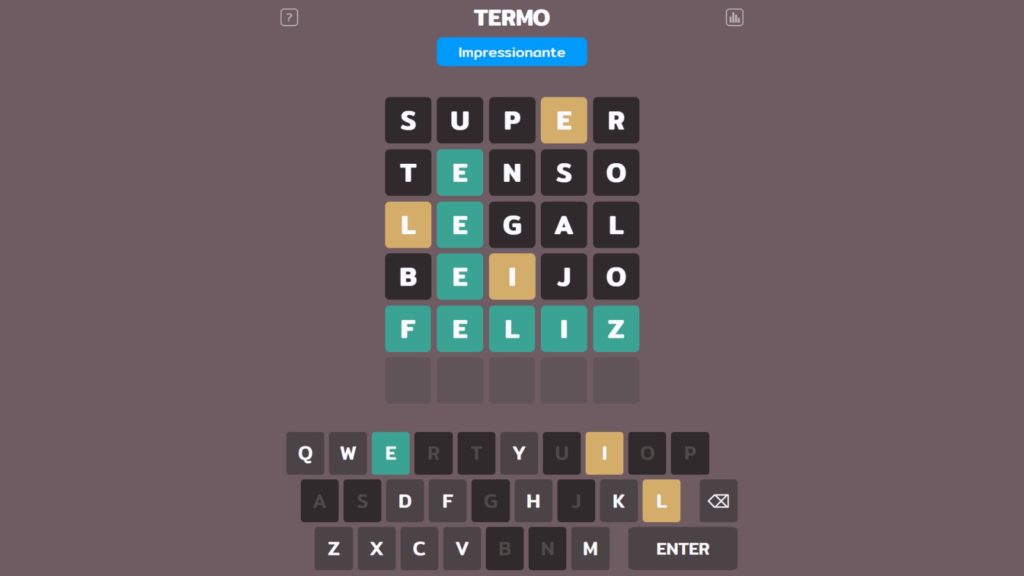 Como jogar | How to play

Termo works pretty much like Wordle does. Os jogadores (players) must find out a palavra certa (the right word) and they have seis tentativas (six attempts). They start out by typing any 5-letter-word into the grid. When they press ‘enter’, some letras (letters) might change. If they turn amarelo (yellow), it means that the letter belongs in the word, but it is na posição errada (in the wrong position). The ones that turned verde (green) both belong in the word and are in the right position. The cinzas (grey ones) do not belong in the word and should be avoided when you adivinhar (guess) again. So all you have to do is keep on trying until you get a resposta correta (the right answer). Simples assim!

It’s not just highly viciante (addictive), it’s also very educational too! And if you’re wondering whether your Portuguese nível (level) is good enough to suceed at (or have fun with) this game, maybe you could see it as an opportunity to expand seu conhecimento (your knowledge) by using an online dictionary. I would recommend Michaelis, Priberam or Dicio. And no, it’s not trapaça (cheating) if you’re still learning the language! It can help you conhecer novas palavras (get to know new words) while, well, increasing your chances of ganhar (winning) as well. No harm in that!

And don’t worry about desperdiçar seu tempo (wasting your time). New words are available only uma vez por dia (once a day), meaning that, no matter how tempting it is, you’ll only be able to play it once and then try again the next day. Feel like practicing Portuguese or testing your skills in the language? Hit the link below:

Want to learn more about Wordle? Don’t take my word for it! You can read what Gary has to say about it here:

And, of course, don’t forget to compartilhar (share) your results!