The Sweet Sounds of Caribbean Spanish Posted by Jakob Gibbons on May 30, 2016 in Uncategorized

Last week we shared a post on some of the quirks of Colombian Spanish, but even within this one country there’s as much variety of language as of geography and people, with sometimes mind-blowingly different pronunciation and word choice to be found just over the next mountain range.

One of the many varieties of Spanish you’ll hear in Colombia is the one spoken in cities like Cartagena and Barranquilla along the Caribbean coast, called Español Costeño in Colombia and known throughout the wider Spanish-speaking world as Español Caribeño, or Caribbean Spanish.

It’s the Spanish you’ll hear in salsa, reggaeton, or merengue, as well as in the Cuban sandwich shops of Miami and Carnaval celebrations throughout the region. While there are of course differences between particular areas, of the Spanish-speaking Caribbean, a few important pronunciation features are shared throughout the region, and a lot of them can be challenging to understand for those who’ve learned or spoken another Spanish variety.

If you listen closely to the first few lines of this music video, you’ll hear hints of the Cuban accent around words like con los grandes and la escuela.

Caribbean Spanish is the language that tells the tale of one of Latin America’s most culturally diverse and linguistically unique regions. As some learners struggle to understand what sounds like a much less precise version of Spanish than they learned in school or abroad, they should also learn a bit about the region’s history and linguistic origins to better appreciate its peculiar pronunciation as an important part of the Caribbean cultural puzzle.

Español Caribeño: Where it Came From and Where It Went

While all of the Spanish-speaking countries of present-day Latin America received the language from their colonial rulers in Spain, the region was already incredibly diverse by its ‘discovery’ by the Spanish in the late-fifteenth century. The distinctions between different varieties of Spanish today are related to cultural and historical differences between different regions, and the Caribbean has a particularly colorful history to match its colorful speech.

Caribbean Spanish is a multi-continental mixture made up of Spanish, mostly from the Canary Islands; indigenous languages of the native societies that existed before and until the Spanish conquest, like the Taíno language; Bantu and Niger-Congo languages spoken by enslaved West African persons; as well as more modern influences from neighboring English- and Portuguese-speaking countries, and the English- and French-based creoles spoken by locals across many of the Caribbean Islands.

Today, Caribbean Spanish dialects have gone global, following the massive 20th century emigrations from countries like Cuba, the Dominican Republic, Venezuela, and Colombia. Today South Florida and New York City are the most visibly Caribbean Spanish-speaking parts of North America, where vibrant communities of immigrants and second- and third-generation Cubans and Puerto Ricans are staking out a new hybrid cultural identity that includes a distinctly Caribbean-influenced way of speaking.

4 Defining Features of a Caribeño Accent

If you’re planning a summer language vacation to Cartagena, Havana, or Miami but you learned your Spanish in Mexico City or Madrid, prep your ears for these potential listening pitfalls.

When you’re in the Caribbean, words suddenly get shorter.

If there’s a d on the end of a word, you won’t hear it, so words like verdad and mitad turn to verda and mita. And s can fall of either end of a word, so gracias becomes gracia, and estás simply ta.

In rapid speech, Caribbean Spanish is one of the groups of dialects quickest to drop the final part of a word, clipping words like para to pa’, or simply dropping the ends off of longer words entirely.

In the Caribbean and in areas like the Southern Cone of South America, the Spanish s is particularly slippery. We’ve already established that it falls frequently off the fronts and backs of words, but it’s one of the only sounds that can so easily fall out anywhere in the middle as well.

Be especially vigilant for long s-filled phrases like “esta es la justa estación”, which in reality are pronounced more like “ehta eh la juuta ehtació“. Always remember, if it doesn’t seem to make sense, try mentally inserting some s-sounds and see if it sounds more like the Spanish you know.

#3: Everything about about r and l

In some of the Caribbean Islands, if liquid sounds like r and l  show up too late in a word, they get crossed off the guest list. Infinitive verbs like comer become, confusingly come.

In the Dominican Republic and Puerto Rico, r and l are the uncoolest kids in the class, to the extent that not only are they completely ignored on the ends of most words, but also that most Dominicanos and Puertoriqueños make little if any distinction in pronouncing cerdo as celdo, or alma as arma.

When Spanish words end with a vowel and an n in the Caribbean, that n is often only implied. This is called nasalization of vowels–think French nasals, but then not quite so strong. Mi corazón is mi corazó, with the final vowel climbing up a bit into the nose in compensation for the n that just doesn’t quite make it on time. 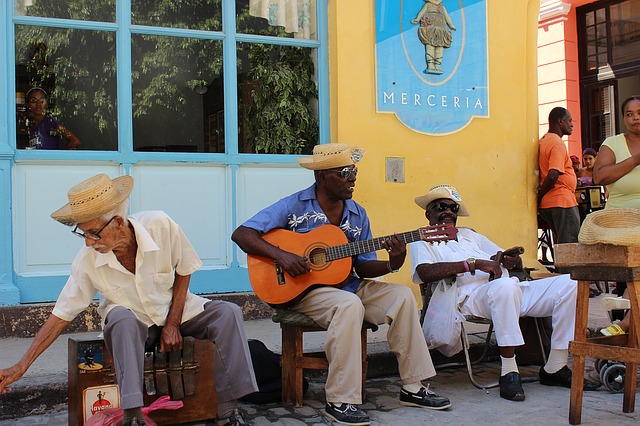 Some Cuban men playing music under the sun in the streets of Havana.

There are plenty of other ways Caribbean Spanish stands out as one of the most creative students in the Latin American class, in its vocabulary, in the way it combines word parts to change meaning, and even in some of its basic word order. Sometimes cute diminutives get an -ico instead of an –ico on the end, like when someone asks you for a momentico of your time, and sometimes there’s a different word entirely, like catching the guagua to get to school or work.

It’s all part of the creative and linguistic diversity of giant world languages like Spanish, and even though at times these regional differences can complicate things for learners, we’d be much better off adjusting to them and using them to further build our own expressive abilities in the language.

To maximize your language learning, you should always expose yourself to different accents and dialects. Try listening to some salsa music or going for a drink in the Puerto Rican or Cuban neighborhood now and then to perfect your understanding of Caribbean Spanish!